Milliken Bar and Restaurant is one of my go-to Dim sum restaurants because one of the “uncle” named Mark gor, used to know me/my family because of how often we go there. Unfortunately, he doesn’t work there anymore – because apparently, he started his own restaurant(??). Hearsay from one of the other employees when my mom asked about him. He takes care of customers well and he talks to you and tries to get to know you better too.

When I went here on our own, he offered this English menu (with pictures!!)… and he did it on his own accord in order to help us with our ordering – which was super good customer service as he anticipates our needs and tries to ease the problem (should it arises).

I took a picture of the English menu because it would be embarrassing to ask for it ever… So pictures would help keep our little secret, haha. I wonder now if Dim sum restaurants should adapt with the iPad technology that ayce sushi places use. But that would kind of ruin the origin of “Dim sum” feel, with the ladies-pushing-food-carts-around-and-you-have-to-holler-at-them kind of vibe. Gears are turning in my head and now I feel that ayce sushi is an adaptation for the Western environment and they don’t have that kind of culture in Japan… But who knows?

烧卖, 燒賣, Siu Mai or Shao Mai, whatever you like to call it, but I call it deliciousssssss

Another form of Dim sum is also called “Yum cha / 饮茶 / 飲茶”, which it’s literal translation is to “drink tea”. Dim sum is another form of brunch within the Chinese culture. It’s more of a relaxing kind of brunch where you sit, drinking tea, chatting while waiting for your order to come + waiting for the food cart ladies to come by (which might sometimes take awhile). To elaborate on “food cart ladies” – some ladies will be walking around with food carts and yelling out the food items that they have in their cart. If you want it, you’d have to flag them down or sometimes if the item is really popular, people go up to the ladies to grab it asap. & I don’t know if you’ve been to a Chinese restaurant for Dim sum, but it can get pretty noisy in there.

I’ve been eating Dim sum since I was younger and the two most popular dishes I know are the “烧卖 / 燒賣 / Shu or Siu Mai / Shao Mai / Pork Dumplings” and the “Ha or Har Gow / Xia Jiao / Shrimp Bonnet” Sources from: Har gow – Wiki & Shu mai – Wiki. Yes, I had to Wiki for the English terms because I’ve only known the Mandarin or Cantonese version of saying it. By the way, the word “Dumplings” is so overused in the Western country in terms of describing Chinese food because there are SO many different type of “dumplings”!! It’s crazy.

When I was younger, I loveeed Har Gow, but recently, I’ve been loving Siu Mai more.

Pai Gwat or Steamed Ribs (thanks Google and Wiki (again)!!) are a mixed of pork and beef ribs. The meat is chewy and they’re usually made with black bean sauce. Those brown woven baskets you see in the pictures are steamer baskets which are commonly found during Dim sum. Usually the plates are super hot so the steamer baskets are to help waitresses to put food on the table, but even sometimes those steamer baskets can get really hot too – so be careful. 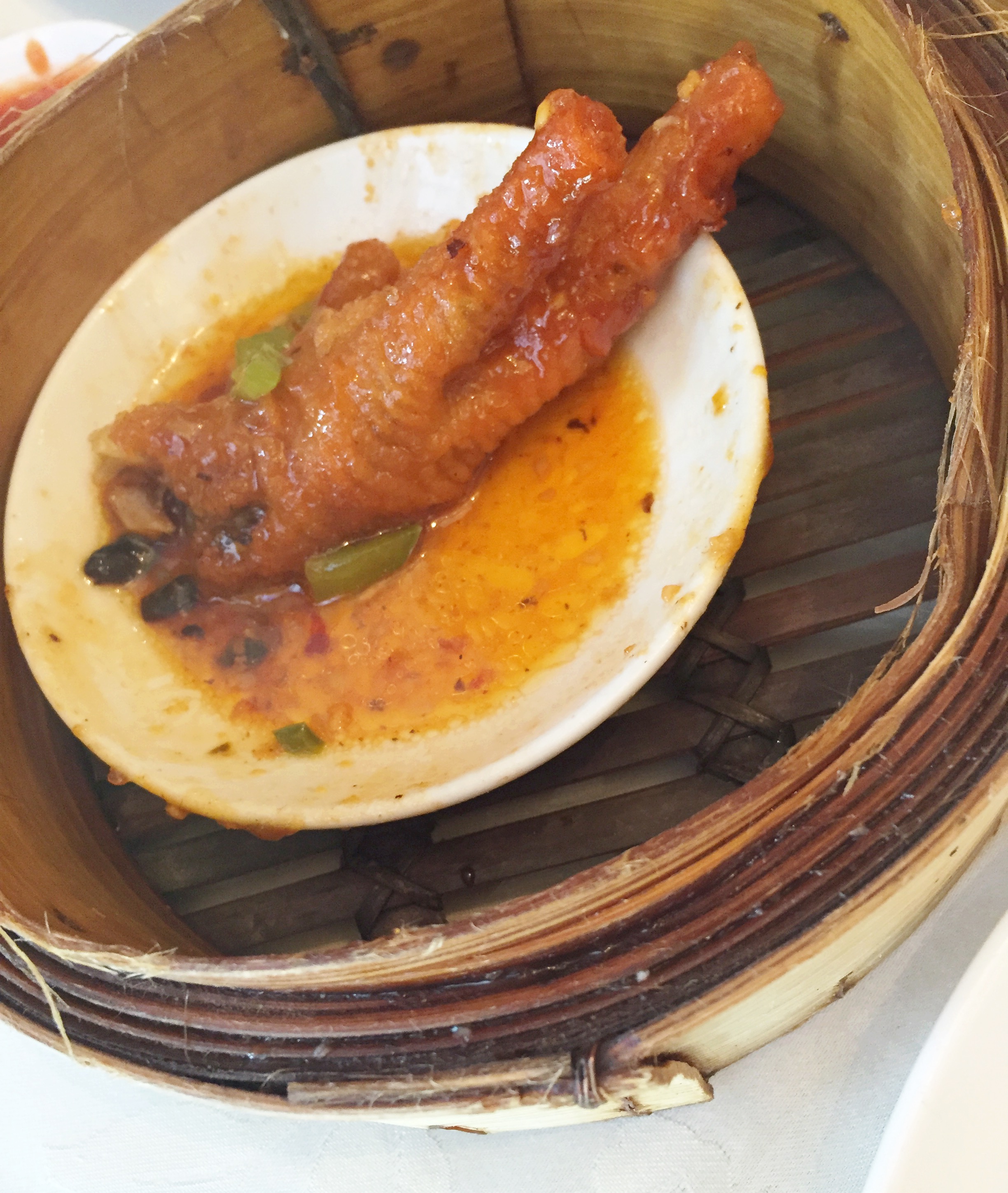 Out of the many dishes, “Feng Zhao or Chicken Feet” is actually pretty popular for Dim sum. I don’t usually eat it, but I did tried a small piece of it for the first time quite recently. I liked the taste of the sauce, it was tangy but not overly sweet. However, the point of this dish was to eat the entire thing (or as much as you want) and spit the tiny bones out after. To basically eat the skin and the sauce and stuff. I believe they {some random super ancient person from 999999 years ago} wanted to use the entire chicken as a dish and not waste any part of the animal when it could be eaten…
Just my speculation anyways.

These dishes are some of the few I’ve ate the other day, and you can look at the English menu for more Dim sum references. But here’s a Dim sum link for you, so you can check out some of the more common dishes in Dim sum! Including the “Char siew bao / BBQ Pork Bun”, Spring rolls, “Luo mai fan / Nuomi fan / Chinese sticky rice”, etc etc. You can also order noodles and congee/porridge as well!

This restaurant is super efficient with their service after you’ve placed your orders. However, Milliken Bar & Restaurant doesn’t have “food cart ladies”. I know some other Chinese restaurants do though. If you can’t find the food item you want on the order sheet, you can always ask one of the workers and they’ll gladly help you – which is one of the reasons why I enjoy coming here.