This would be my 3/3 birthday celebration! This dinner with my family happened on the same day with my friends and we went for lunch and high tea at Annvita just a few hours earlier of this dinner. So I had been eating the whole day (ohmygod)! Both food adventures are on the blog, so don’t you fret!

Eating dinner with my family to celebrate my birthday and we decided to go for Chinese food since it was sort of last minute and squeezed in my schedule. I was really busy with school since it was near exam season which also means a lot of assignments were due, etc. 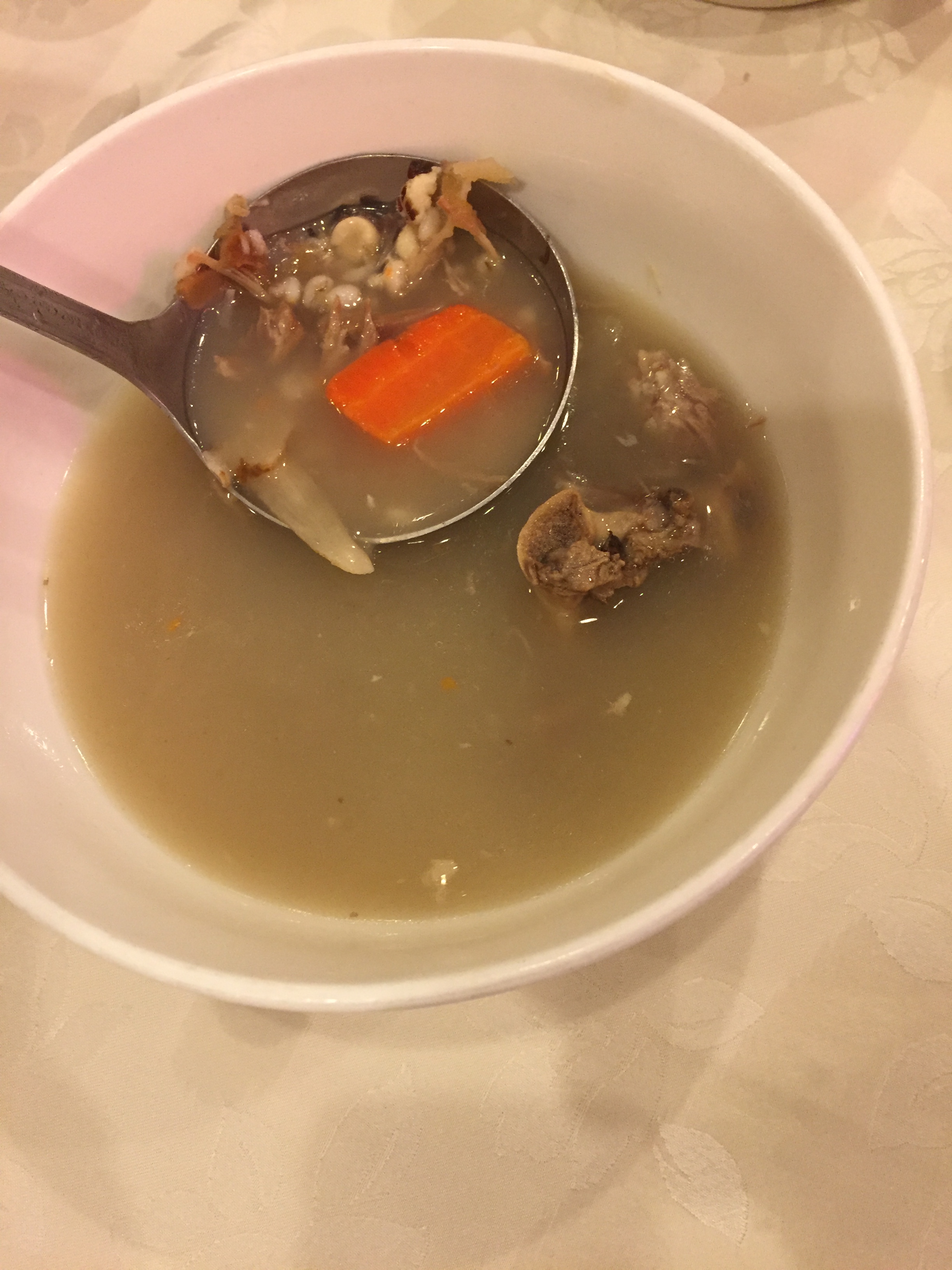 I, personally, like coming to this restaurant because I like their food. Although my parents say they’re slightly overpriced, but I like the ambience of this place. We come here quite a bit as well, so my parents know the menu and some of the workers here 🙂 . However, try not to sit near the door if it’s winter because the cold seeps in quite easily.

As usual, we get started off with a complimentary Chinese soup. The soup consists of carrots, herbs, and meat which were chewy and easily shredded from the bone. It was warm and yummy to start off our meal! 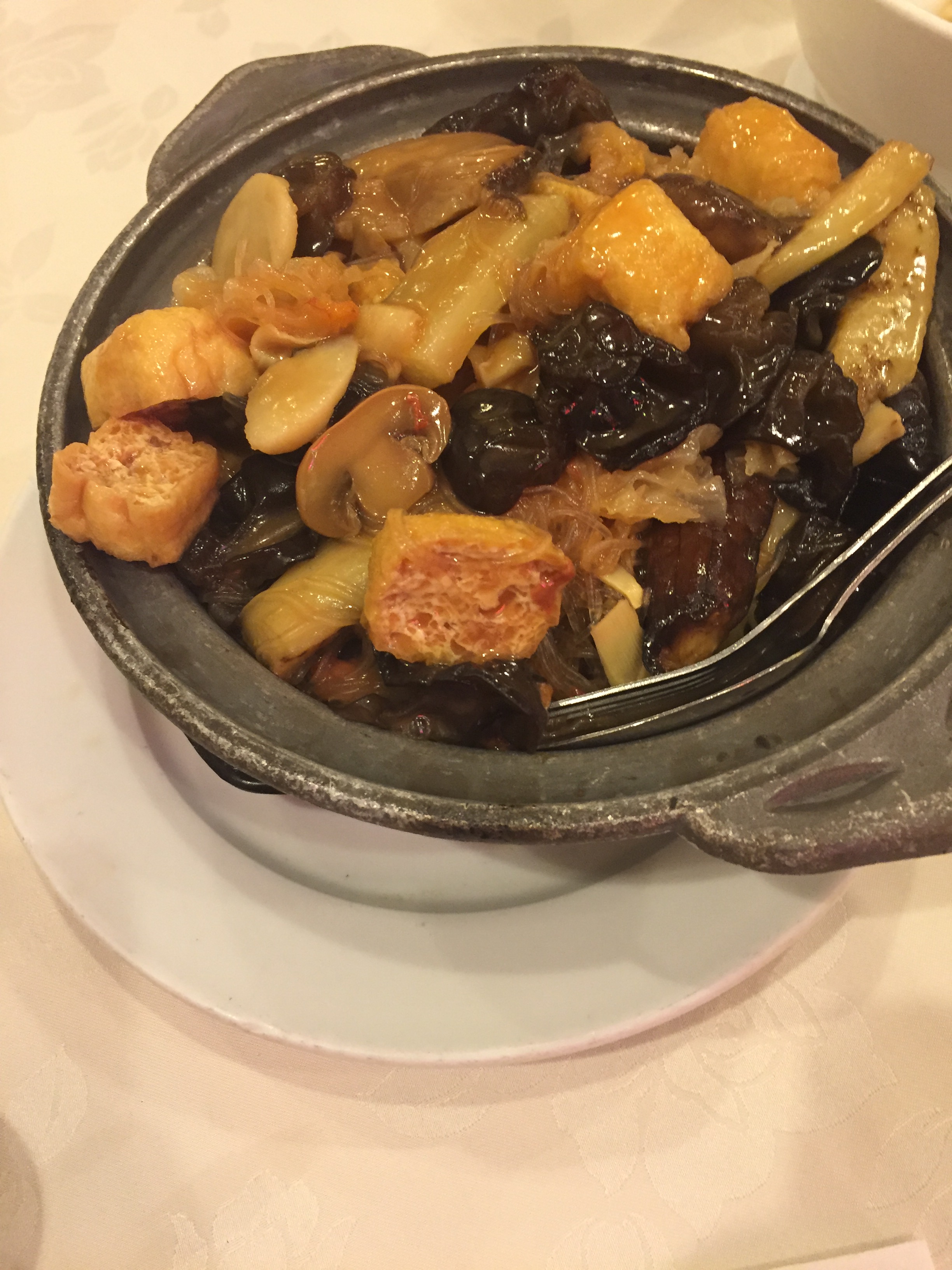 One of our many dishes

This is more of a vegetarian dish, consisting of tofu, cloud ear fungus, mushrooms, bok choy (at the bottom) and glass noodles (plus some stuff I don’t know). I love the sauce with the glass noodles of this dish, although it is hard to grab the glass noodles since they’re so slippery! 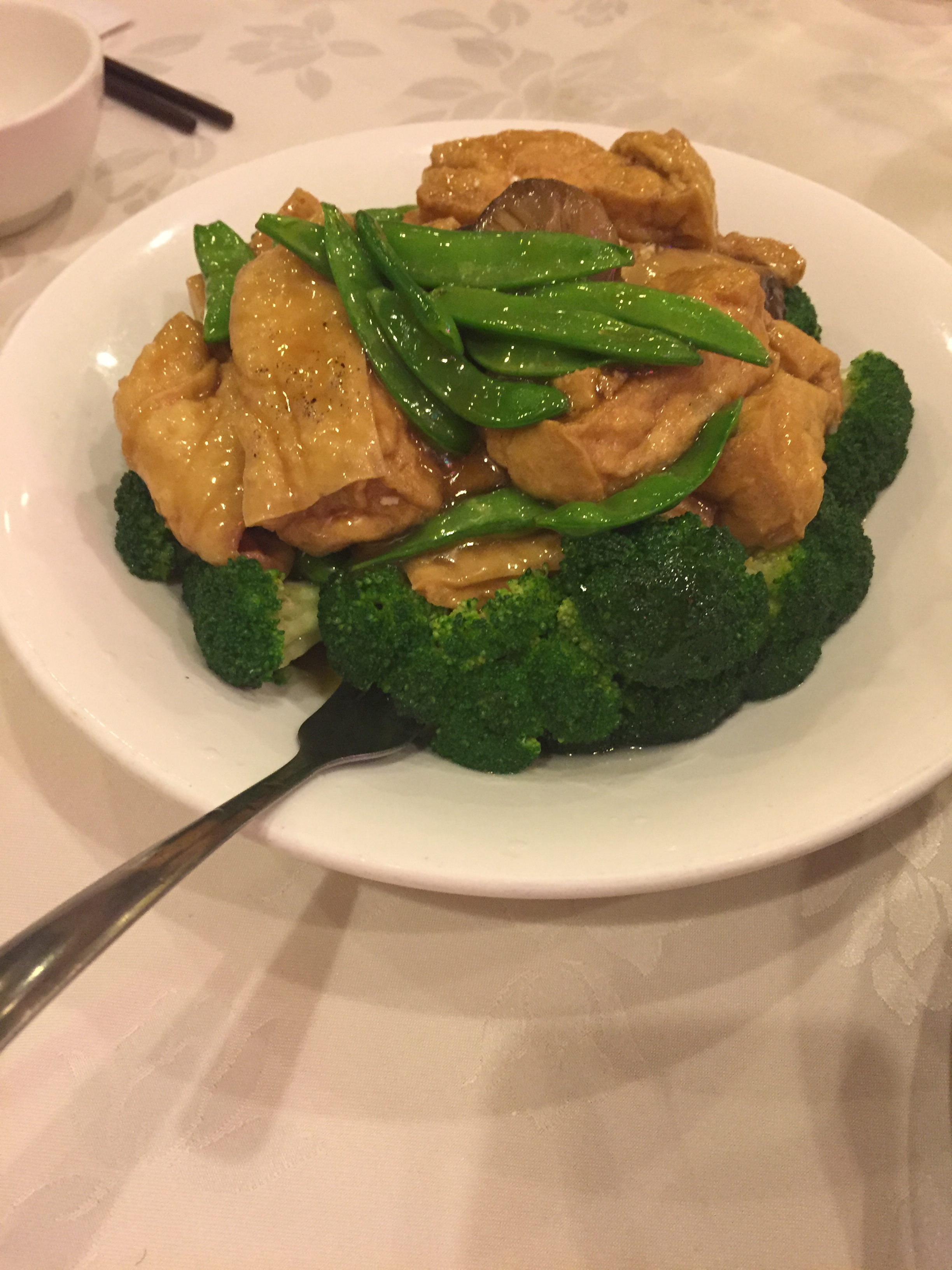 Another veggie dish! This has broccoli, tofu, snow peas and mushroom. One of the more common vegetable dishes in Chinese restaurants, in my opinion. Some places have this one a glass bowl with a really thick sauce, using wild mushrooms instead as well. 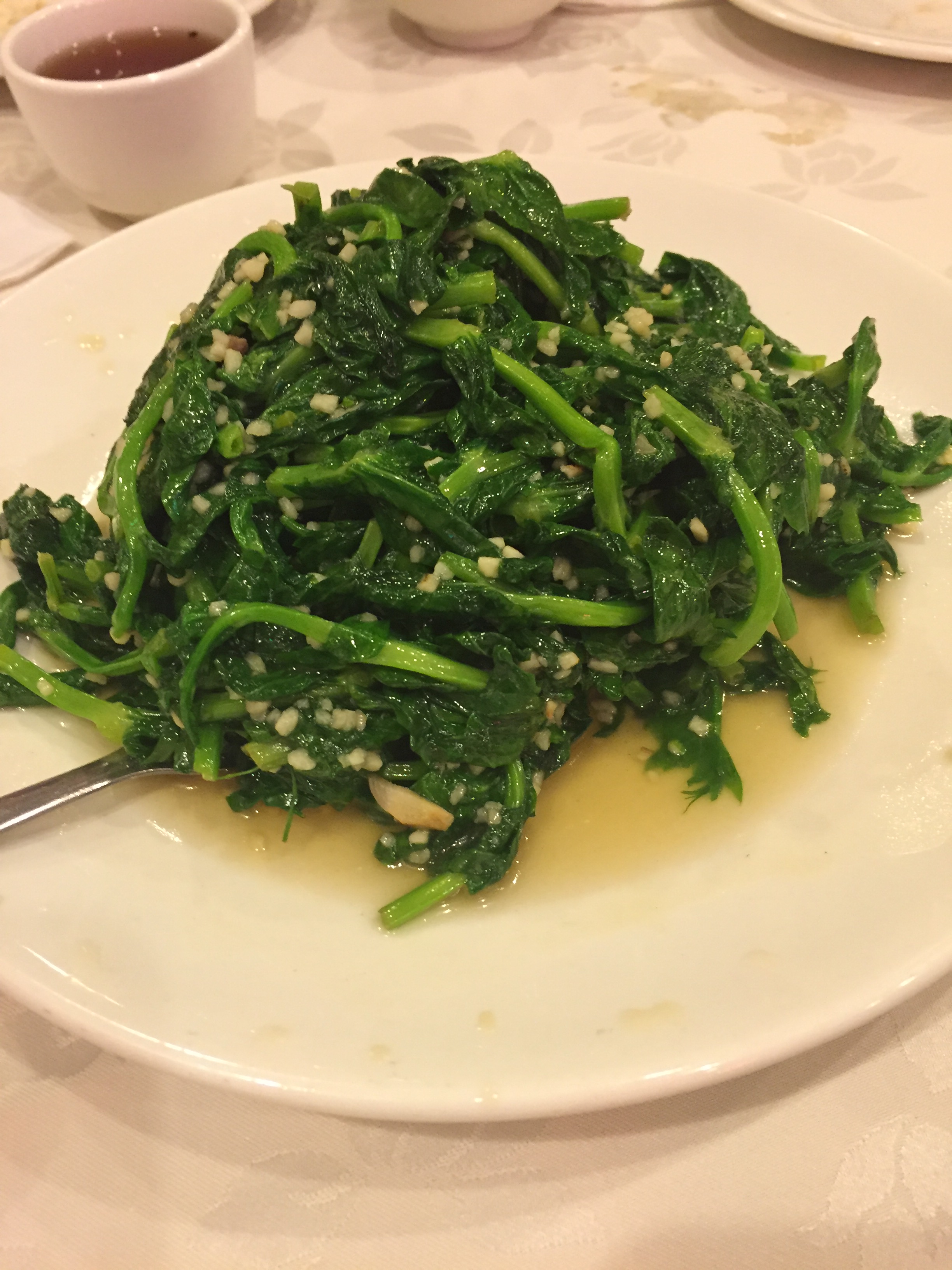 As you can see, my family loves veggies. It’s good for your health!!
Anyways, I have no idea what type of vegetable this is, but it’s just plainly fried with garlic. Which is common in Chinese restaurants as you can do this with many vegetables 🙂 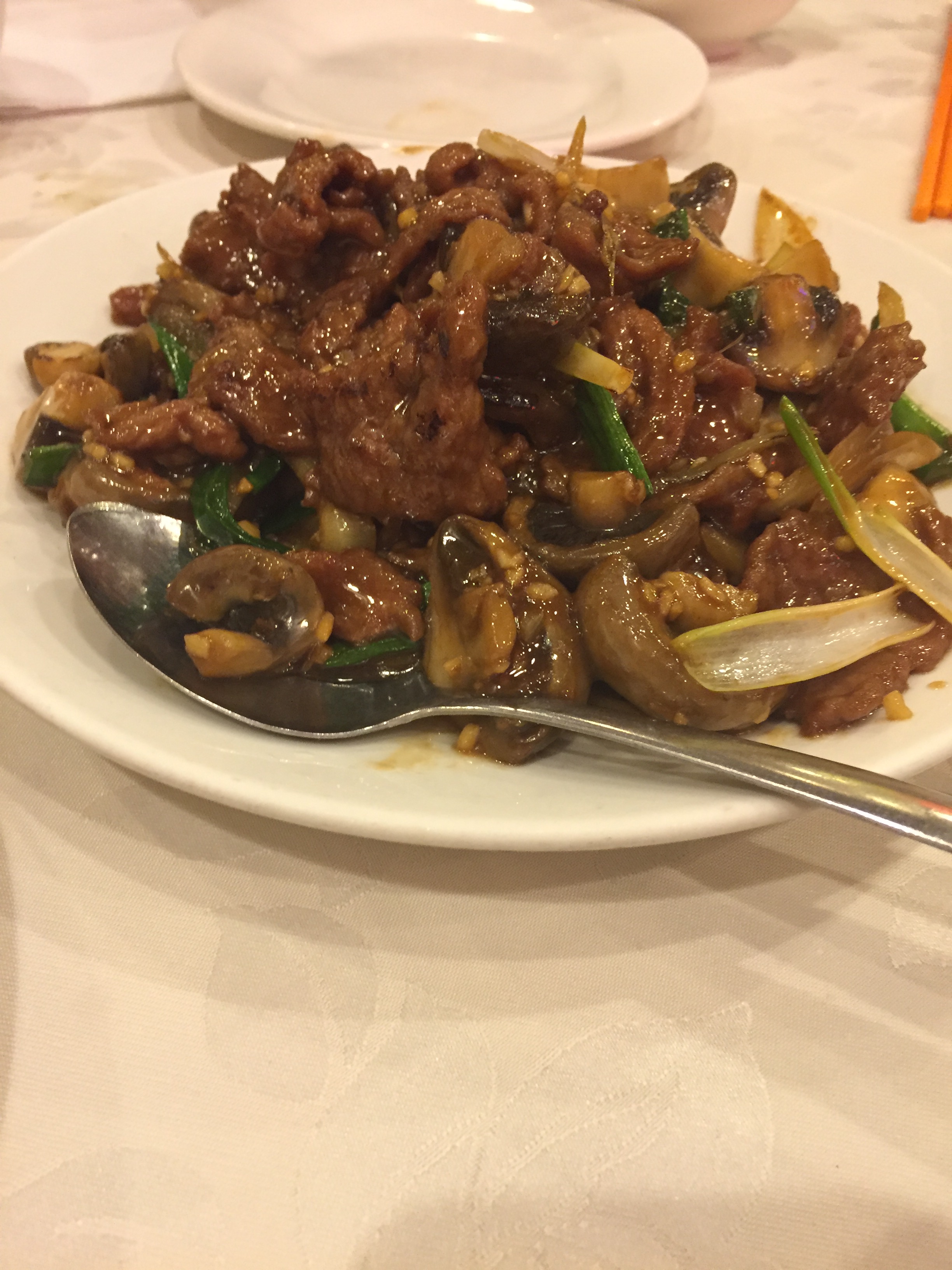 This dish is beef with mushrooms and could come on a sizzling hot plate as well! I tend to avoid the green onions and other veggies in this dish, heehee. The sauce isn’t too thick but just enough – so that it’s tangy and so yum! Probably my to-go beef dish in a Chinese restaurant. 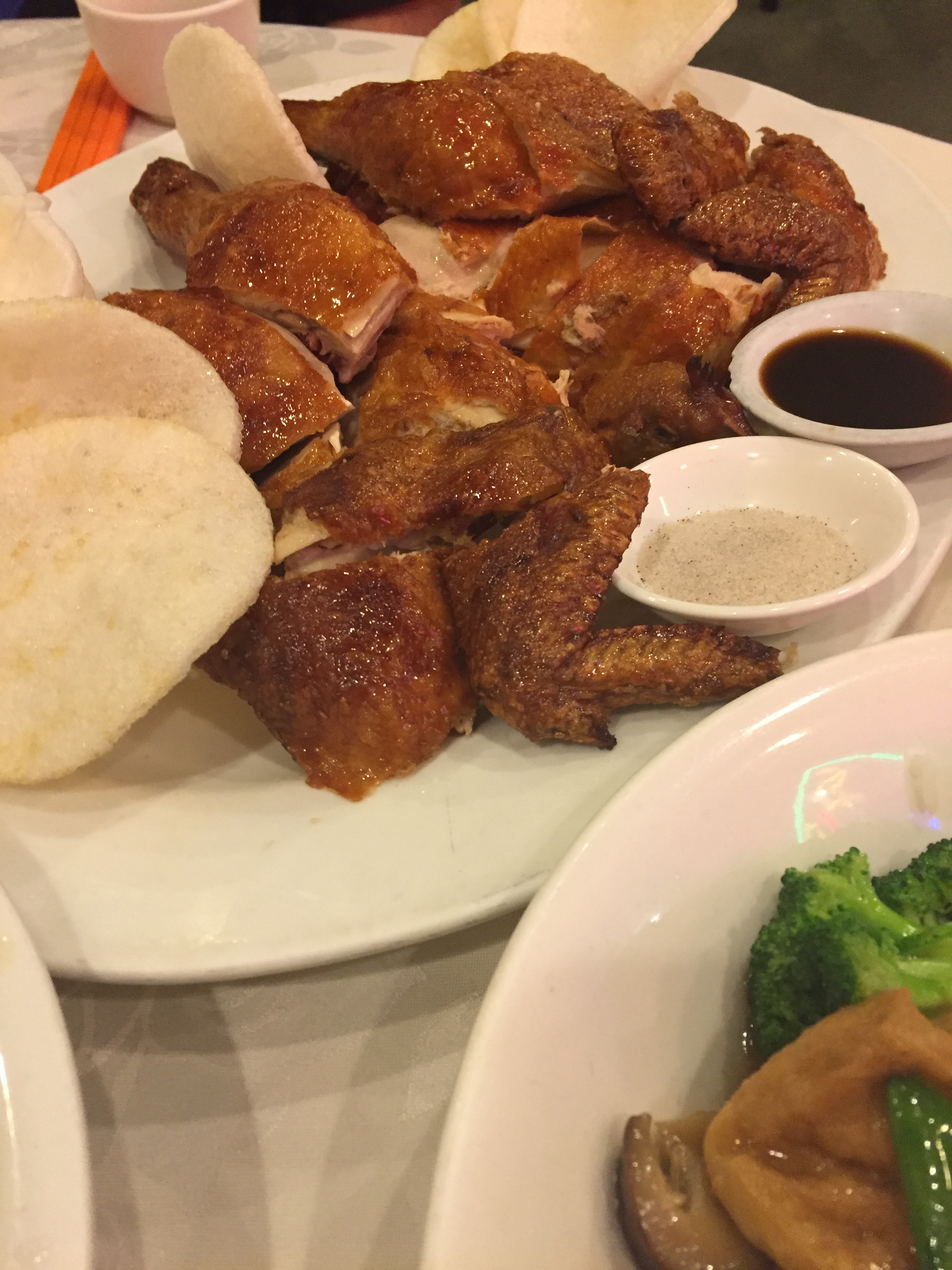 Roasted chicken! This is common if you order a 8-10 course meal in those fancy Chinese restaurants, this is usually one of the dishes being served. There is also steamed chicken which has yellow skin instead. The dips provided are salt and soya sauce. If you don’t regular eat this, you’re probably wondering “Salt? What?!”. But yes, it is salt. It’s actually pretty good (but don’t overdo it, clearly). Because the chicken is slightly sweet and the skin is usually crispy, the salt gives it a sweet and salty balance. 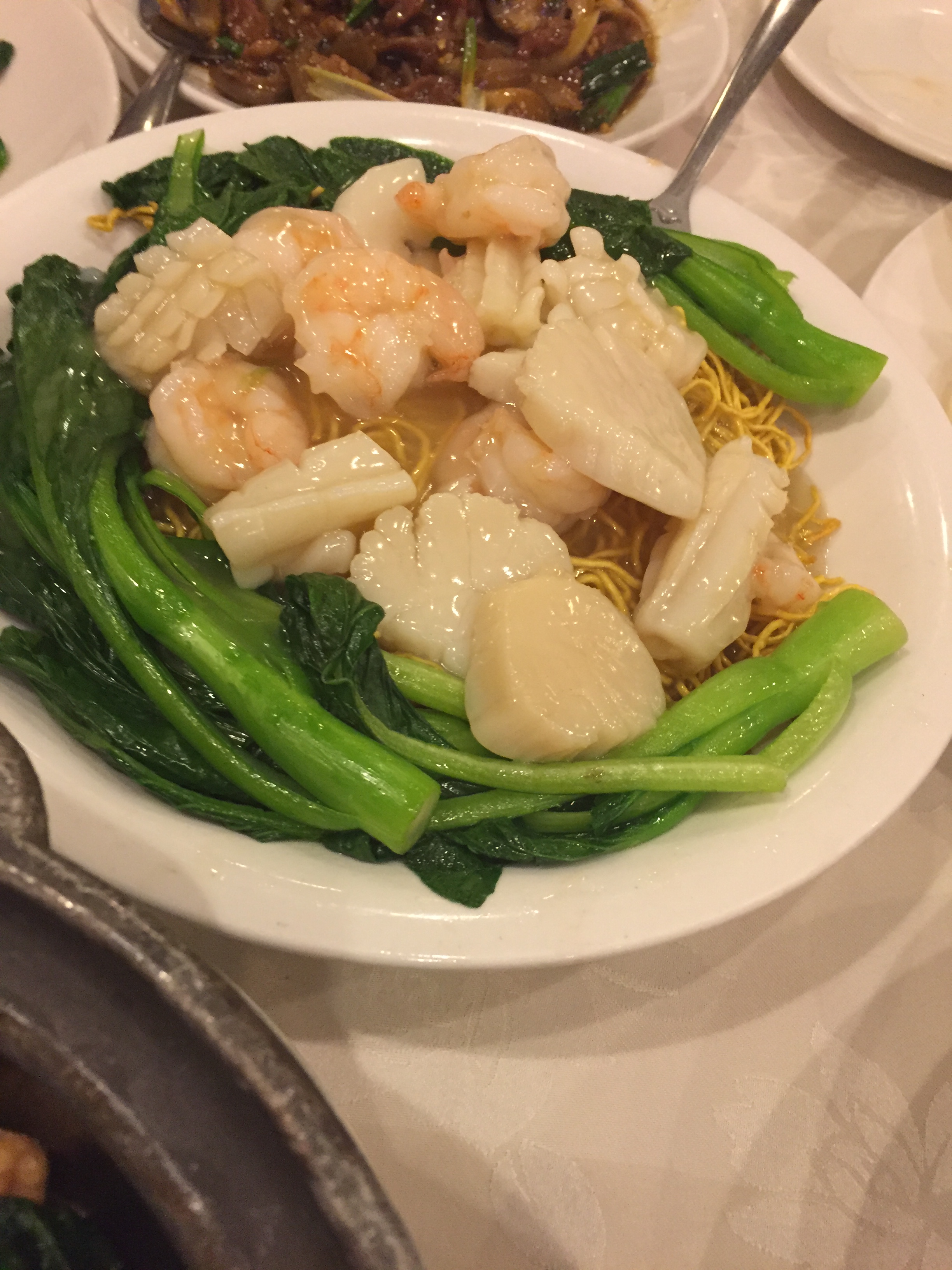 Last, but not least, seafood noodles!

Seafood noodles was our last dish to arrive. This dish is also quite common, even in food courts and probably in almost every Chinese place. It has chow mein with sauce and it comes with squid, scallops, prawn/shrimp with vegetables.

It depends on restaurants, but some restaurants give mushrooms and crab meat as well. There is also a meat variation for this dish!

Usually you would mix the noodles up because the sauce doesn’t cover all the noodles. There is the wet part and the crunchy part of the noodles – it is also up to an individual’s preference which they like. I like the wet noodles, but usually the noodles would be mixed so it’d be a balance of crunchy and wet noodles 🙂 ! 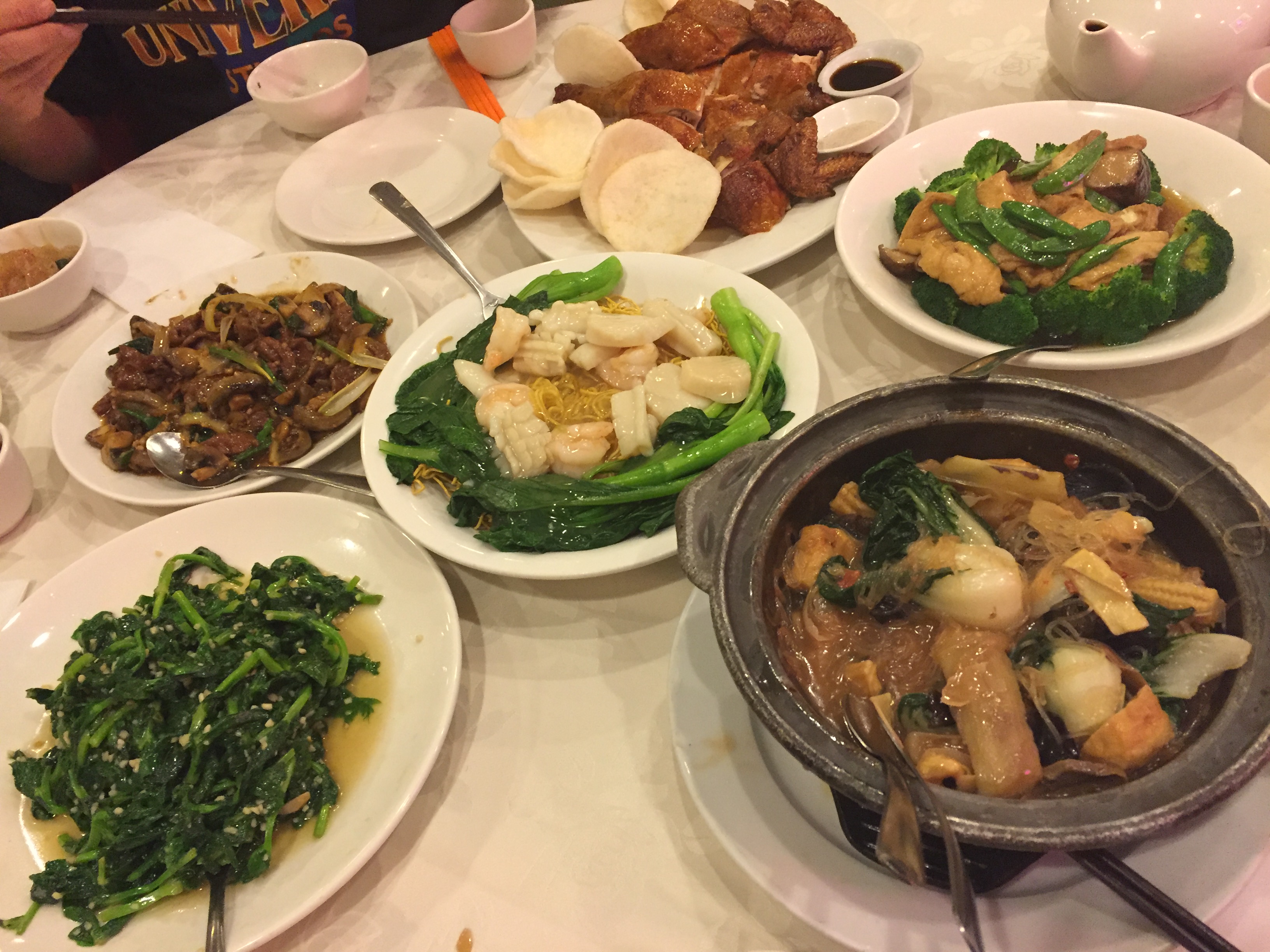 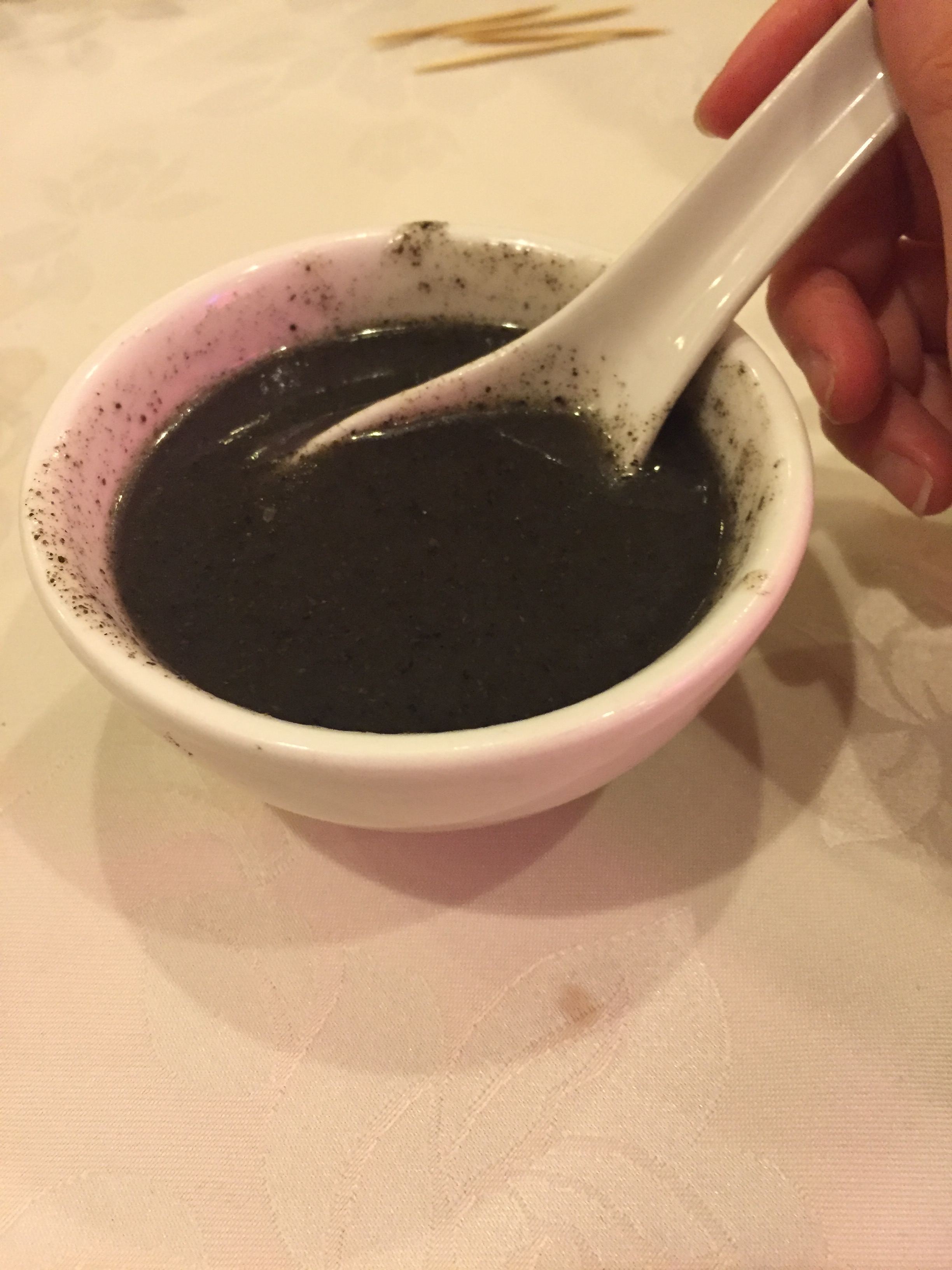 Being raised with Chinese traditions, I’ve been taught that on your birthday, you must eat noodles because it represents longevity. Everyone in the family is expected to eat noodles as well to share and celebrate your birthday together. Thus, having the Seafood chow mein dish!

Food here was bomb as usual! My favourite was probably the vegetarian dish (with the black claypot bowl) and the beef! In Chinese restaurants, they do give orange chopsticks for you to use if you’re eating dinner with guests and in a more formal setting. But since I ate with my family, we were more casual and used our own chopsticks to grab the food instead. It’s more of a mannerism thing, but they do provide those, along with forks and spoons – depending on dish.

The Chinese desserts and complimentary soups at the beginning are always random, so don’t expect the same thing every time you visit in a Chinese restaurant! 🙂

Yesterday was an auspicious day in the Chinese culture. In plain terms, my mom describes it as a “reunion dinner”.
Also, thanks to my Mom who reserved a table because it was so packed!! Even at 7.45-8pm, there were people waiting to get a table.

We ordered a set meal of about 5-6 dishes, not including complimentary soup or dessert.

One of our dishes was this! Bok choy with mushrooms and some other vegetable with it. I think the yellow folded thing is eggs. 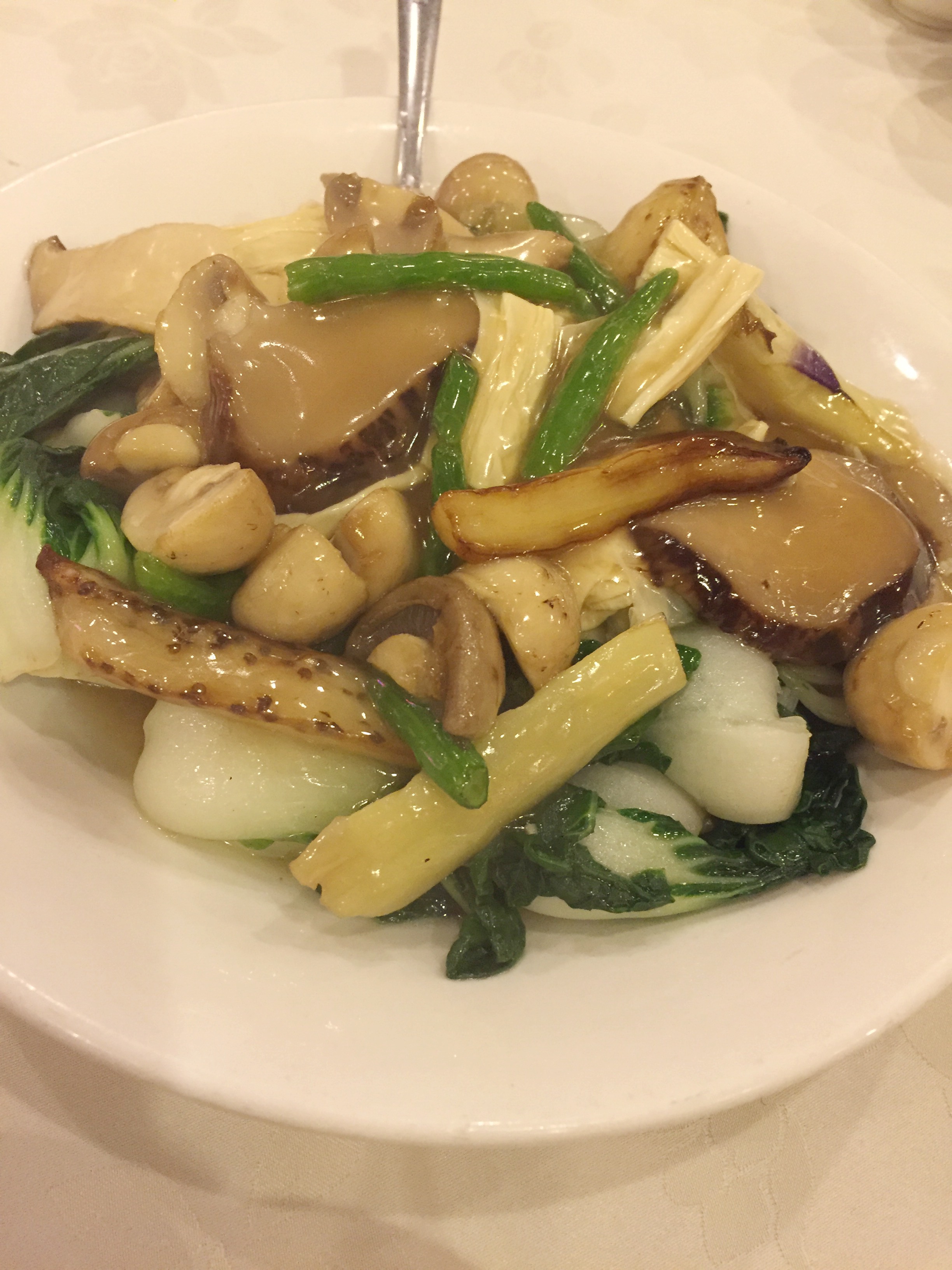 We also got lobster, which more common to get than crab. I used to eat more crabs than lobsters back in Asia. It’s different how each country has a more specific type of seafood, haha . L taught me the secret of eating lobster is to get the easy pieces heehee. Wish I knew how to properly eat legs off seafood… 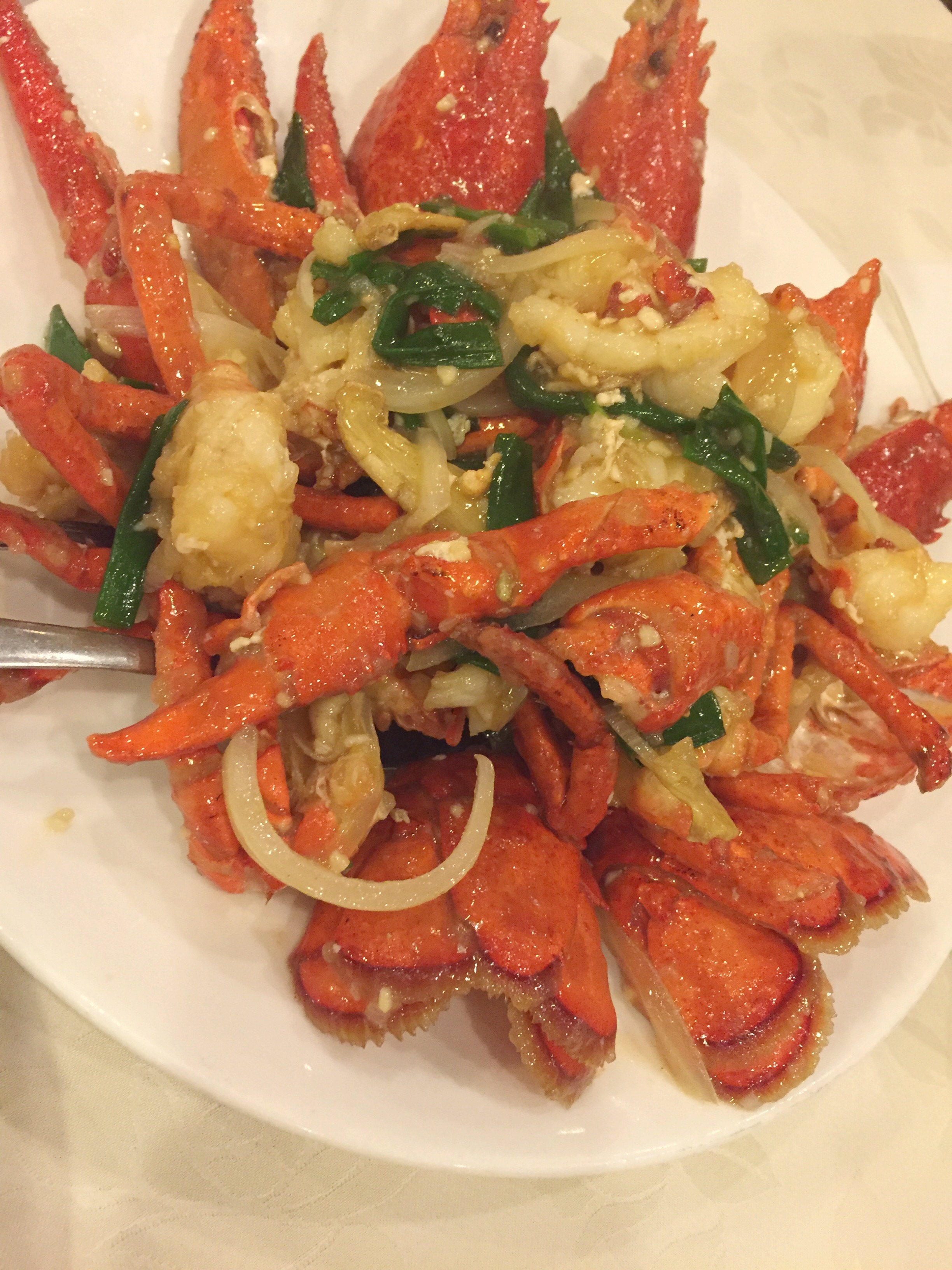 Some of the other dishes included:

Definitely a to-go restaurant for my family. I always leave full and satisfied with the food. Bonus points because it is relativity close to my area!

PPS: I accidentally uploaded this post at 3AM because I scheduled it at the wrong time – so sorry for those who read/liked it earlier! It was my mistake!

Merry (early) Christmas to all! 😀

For more nomz – Yelp and Zomato