Recently heard about The Boil Bar via Instagram and knew I had to go check it out because I’ve been dying to try out this new boiled seafood trend ever since Captain’s Boil came to Toronto! Captain’s Boil pretty far for me to go, so imagine my surprise and excitement when it was close by!

I arrived around 5PM and it was still pretty empty since it’s still relatively new – which I don’t mind since I don’t want to wait anyways. Was seated quickly, even though the waitress didn’t look like she had a lot of training…

The decor was fitting towards the theme – big murals of seafood and even seafood catching cages on the side to divide the restaurant. Bibs, plastic gloves and a roll of tissue was provided per table. The Boil Bar also has a partnership with Presotea, so you can get your bubble tea fix here as well! Though, the menu is very limited. 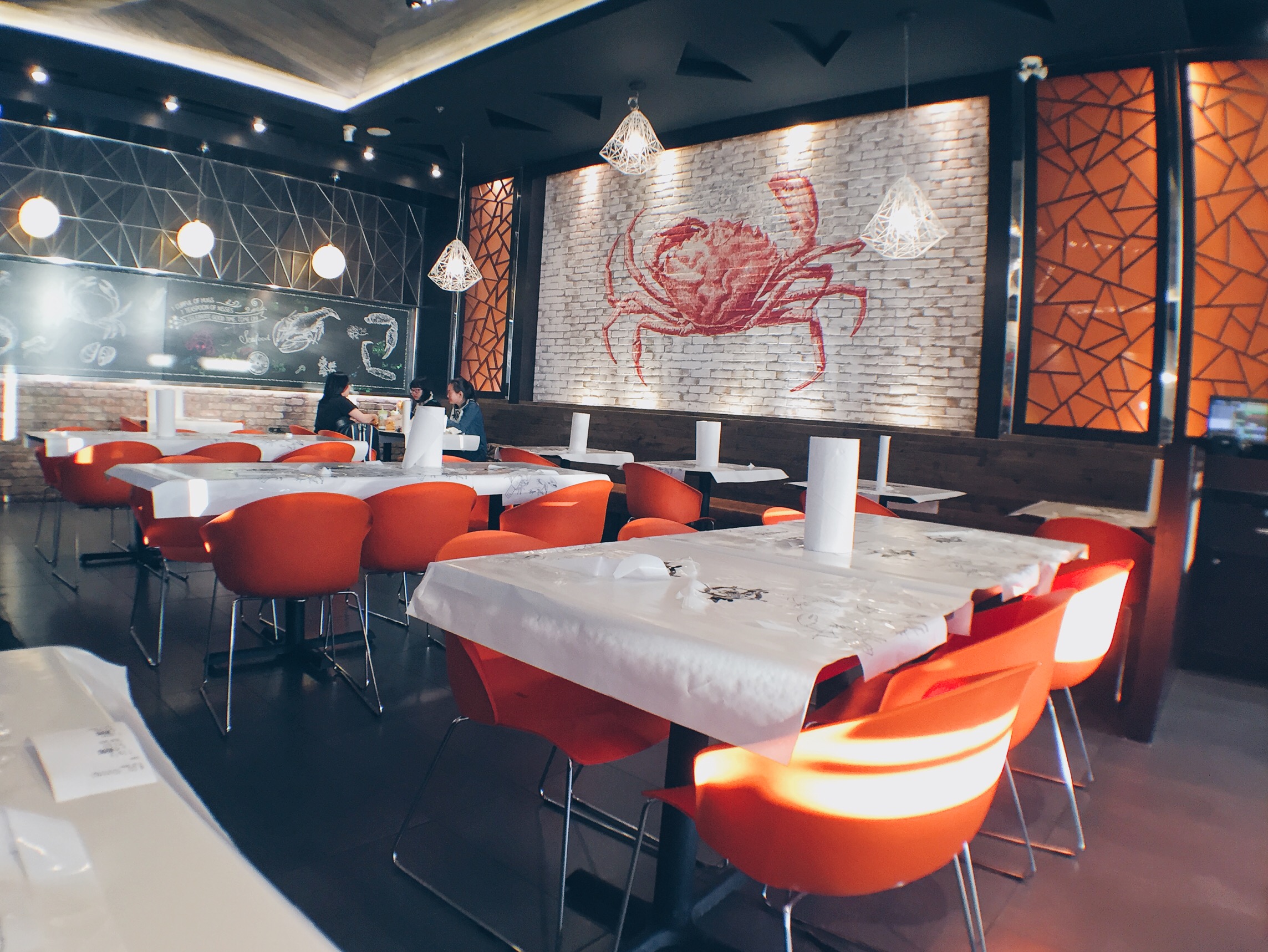 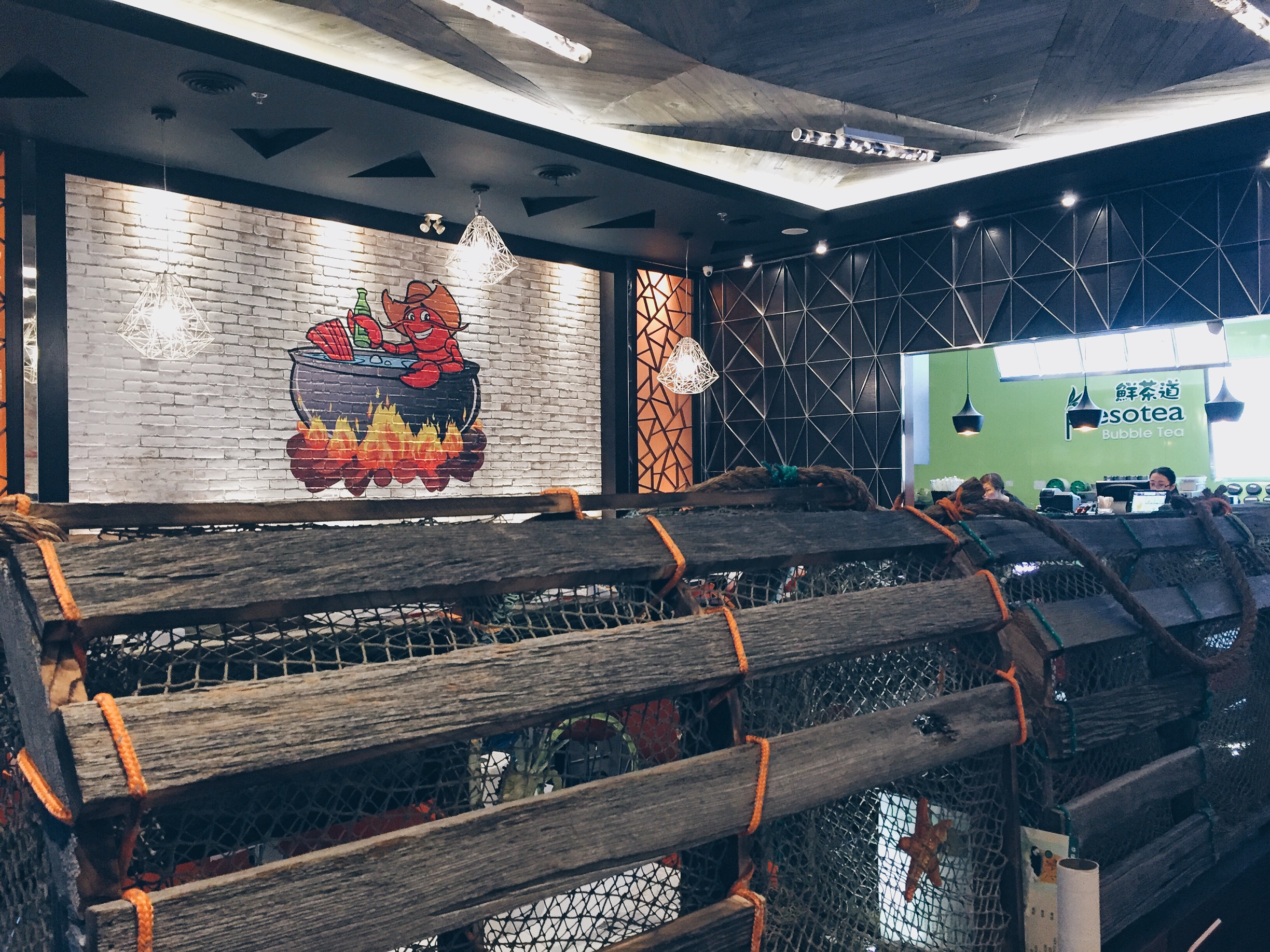 Other half of the room + Prestotea

Menu is fairly simple: pick your seafood, then pick your flavoured sauce and lastly, spice level.
They also had options of sizzling plate, which could come with a side of boiled seafood. Sides of corn, fries, onion rings, edamame (which I find to be a weird combination with boiled seafood), etc. Even other dishes like baked lobster, baked mussels, and seafood fried rice is available! 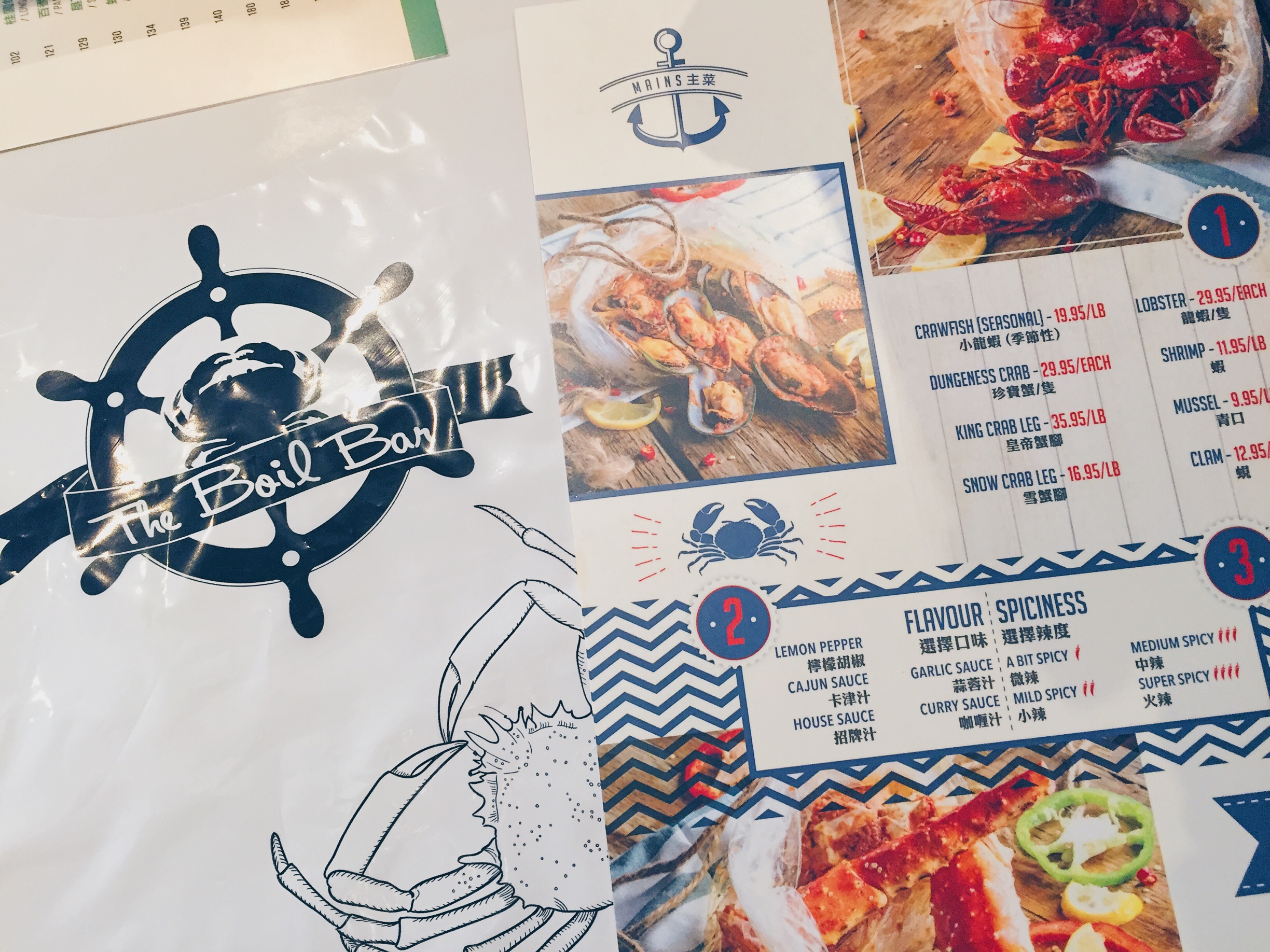 The sauces were hard to pick for us, because they all seem so yummy!
I also had a trouble of choosing between crawfish + mussels or just a dungeness crab since I’ve always wanted to try crawfish.

We went mild spicy as our “highest” level of spice, because I don’t want to ruin our meal if we couldn’t handle the level of spice. 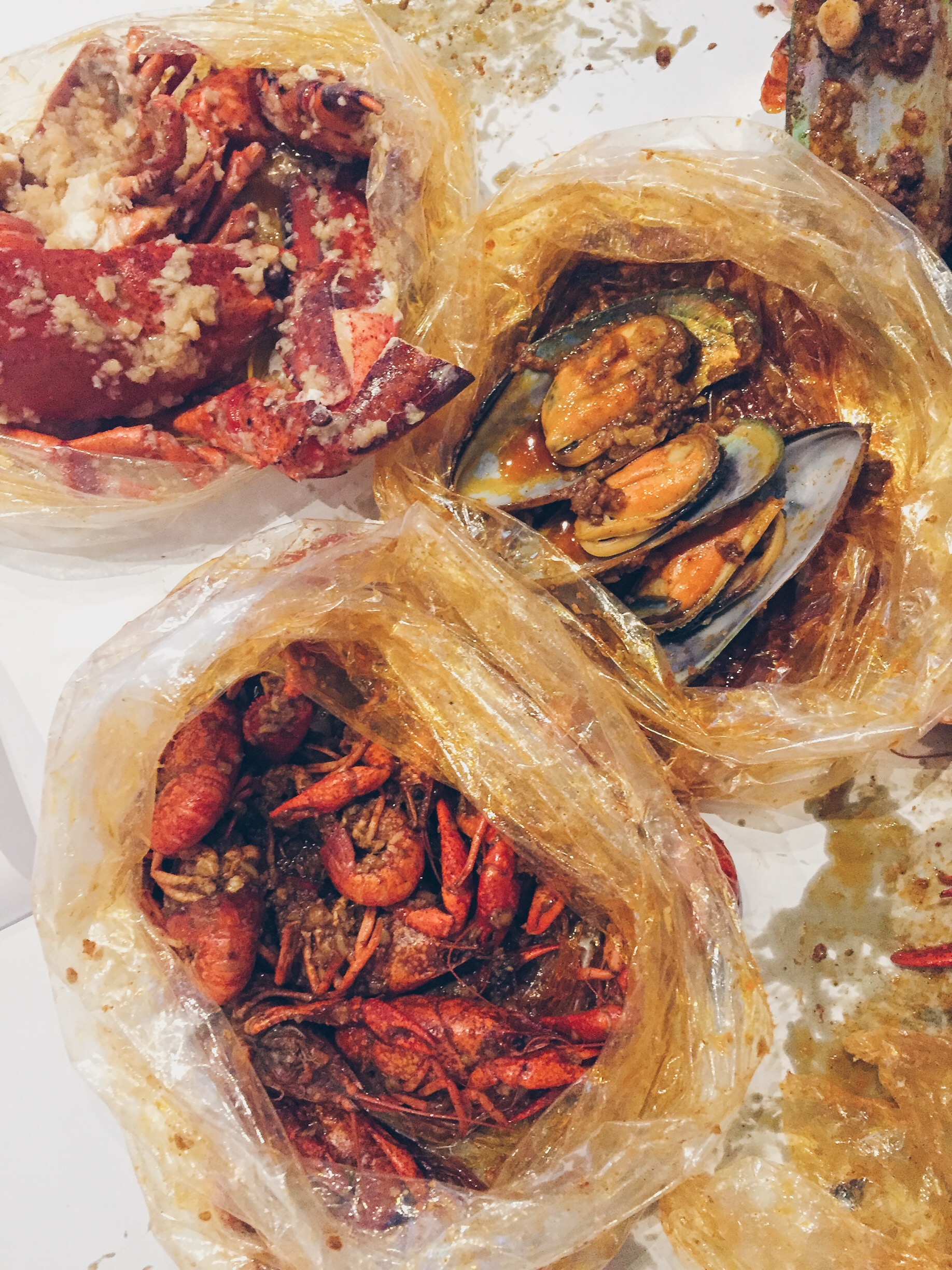 First that came was the mussels, and they came pretty quick after our order. Slowly after was the crawfish, and the lobster. All of our food came pipping hot, and we had to let it cool down a bit before trying to munch on it.

As it was our first time eating crawfish, we had a bit of a trouble trying to figure out how to eat it… but we figured it out in the end and it made things easier.

The lobster only had 2-3 pieces of meat (rest were shells or inedible), which was disappointing for $30. Garlic sauce is typical to me, and is nothing of a unique taste. Crawfish was a slight disappointment for me because I had high hopes about it, seeing people in the USA eating it all the time – it just turned out to be decent and I could barely taste “house sauce”. Maybe it’s the cajun sauce overpowered (??) it since the mussels did come before the other 2 dishes. Our total came up to $74 (tips included) – we didn’t even order bubble tea, just the food! 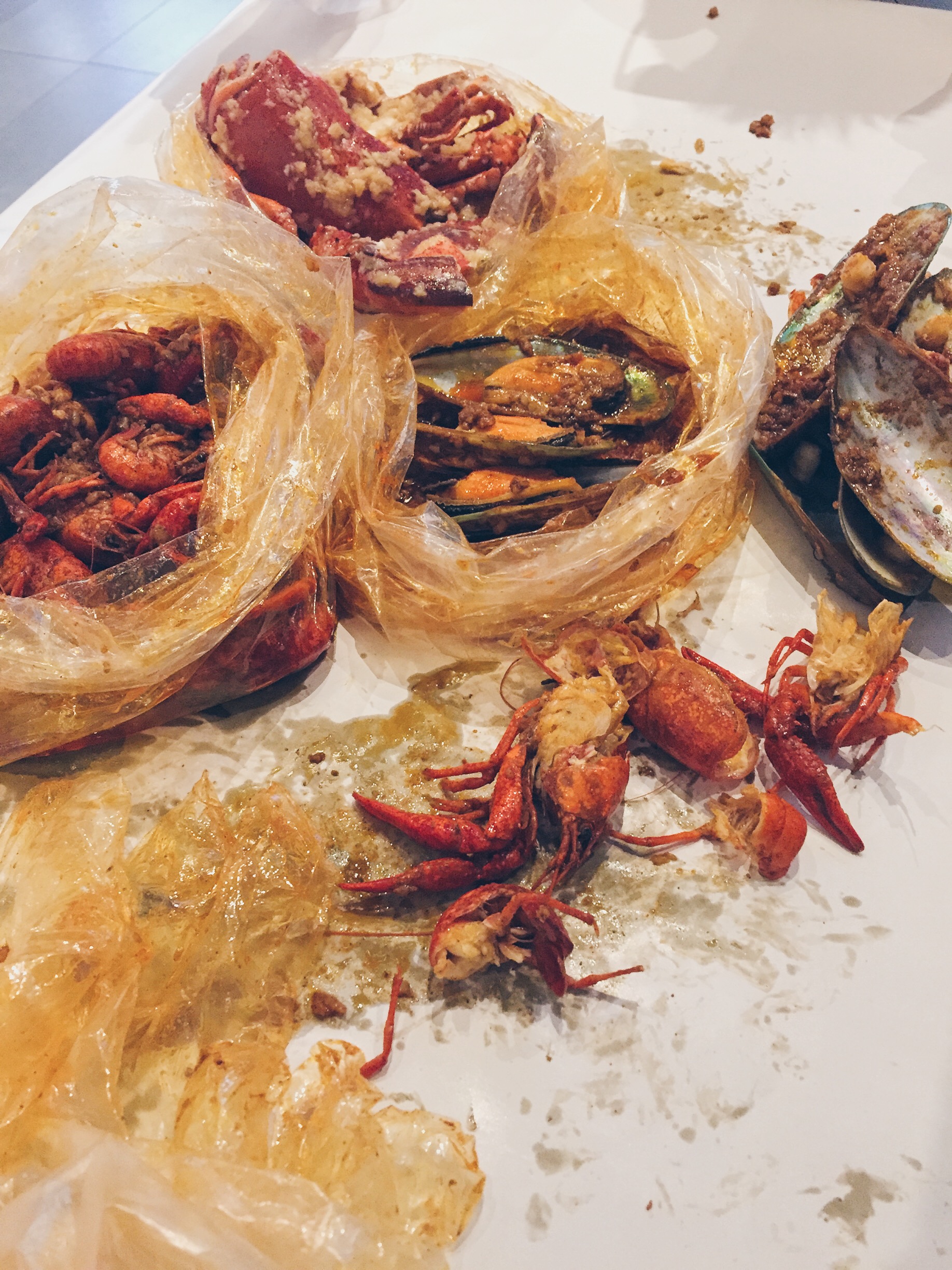 Other cons included: being hard to tear off the tissue off the tissue roll with messy gloves + the sauce soaked through the plastic gloves after the end of the meal + for a place with this eating style, you’d think they’ll have more than one washroom. Plus, we went during a down time period.. imagine when it’s busy and more people need to use the washroom to wash their hands, etc.

As our first experience doing boiled seafood, we left feeling very unsatisfied because we were pretty hungry when we got there, and for the end bill of $74, we thought we’d have our tummies filled. We didn’t order any side dishes because we didn’t want to get full eating off fries, because if we did, we’d just go to McDonald’s.

The thing is: I have never been to a boiled seafood restaurant before, so I don’t know if the norm of going to places like this is to spend a certain amount or if people just order more of the little stuff like shrimps, mussels, clams, fries instead of lobsters and crabs…

After this encounter, it’s making me really want to try Captain’s Boil to have a comparison with The Boil Bar!!

Let me know if you’ve been to Captain’s Boil or any other boiled seafood place anywhere in the world! I’d love to know your experience!