Trying Eggsmart for the first time! I guess you can say that I’m a breakfast foodie.

So off to Eggsmart we went! 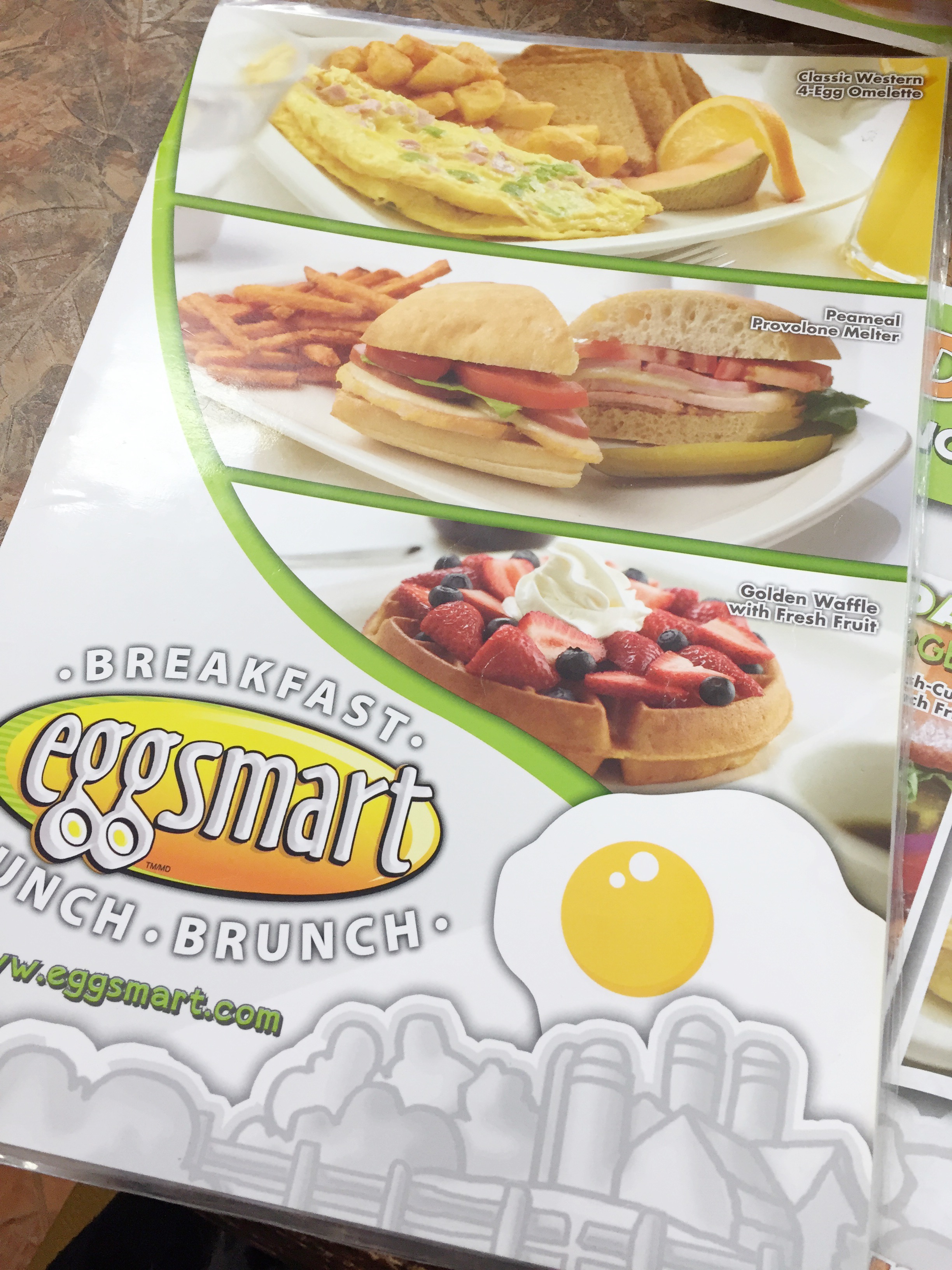 We actually made it before 10AM, so we were applicable for their “Early Bird” Special which was a Classic breakfast for $5-6. Original price was $8.. Yay to unexpected savings!

There was barely anyone there and the waitress who was sitting down and was on her phone, noticed us quickly and told us we could sit where-ever we wanted. We got our menus and drinks ordered fast as well. 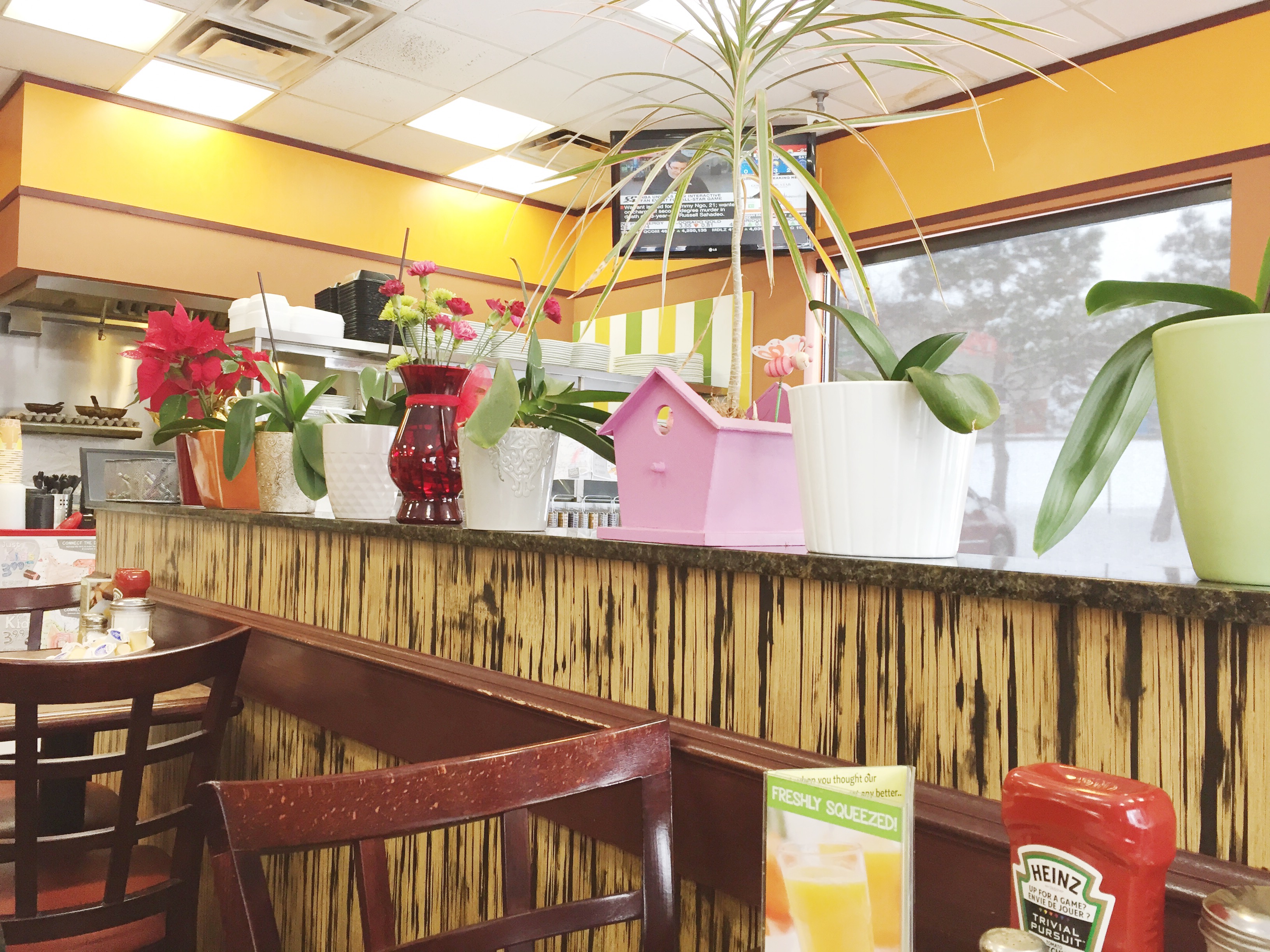 The space was actually pretty tiny compared to how I had envisioned it from the outside… but they have cute decors all around and big windows. The brown colour scheme gives it a cozy and homey feel. You can also see that they have a TV in the background. 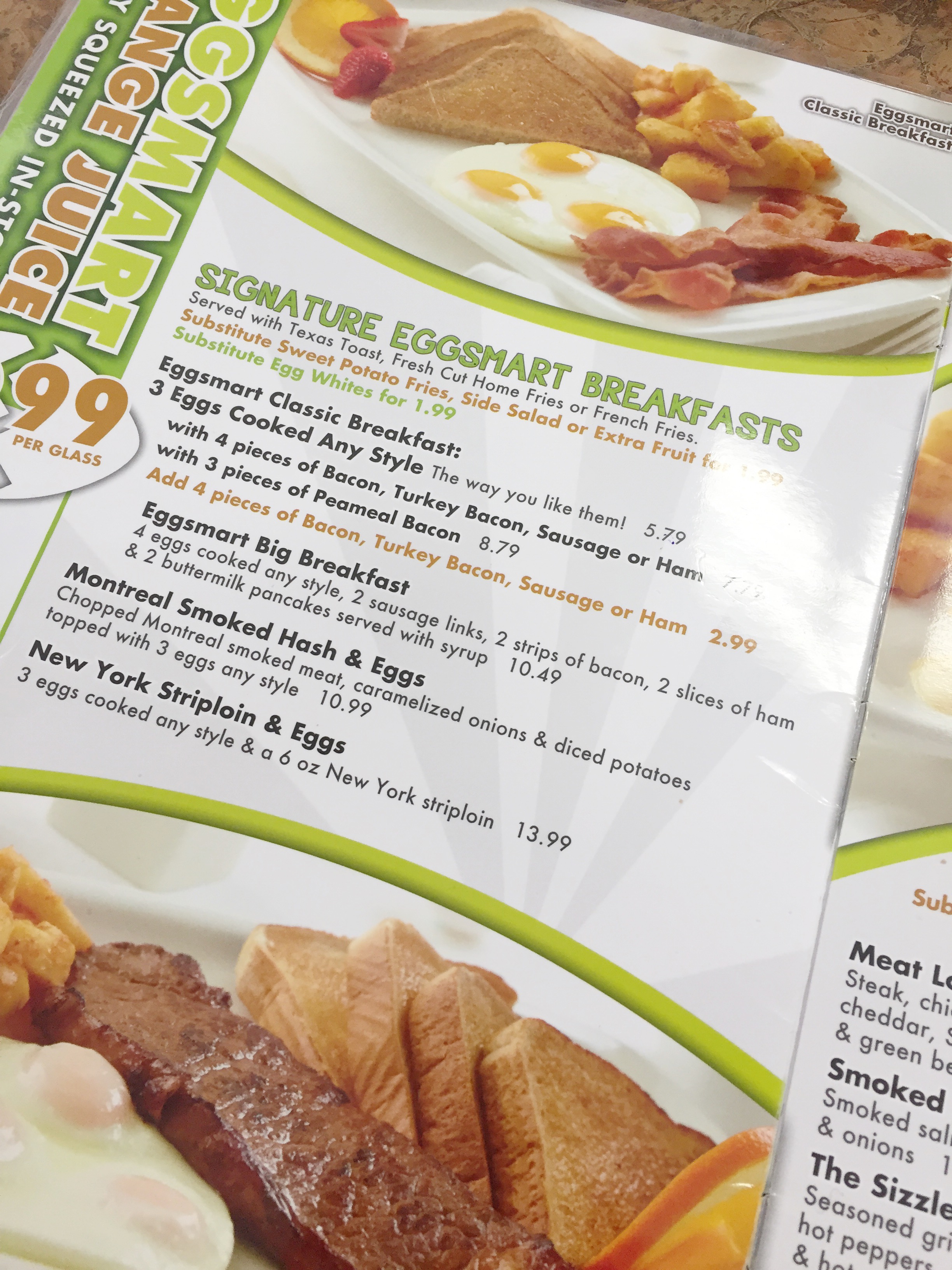 One key thing about Eggsmart is that their Classic Breakfast comes with 4 pieces of meat instead of the usual 3 everywhere else – which is a perk in my books.

They also serve Egg Bennys, Omelettes, Waffles and more! I wanted to try their “Scrambler” which was a toss up of eggs and toppings which can include meat (sausage, bacon, etc), red peppers, green peppers, onions, and more. But because of our coincidence Early Bird, I went for the Classic Breakfast instead.

Since we both decided to get the Classic Breakfast “Early Bird” Special, we decided to get sausage and bacon and split it between ourselves for more variety.

I tend to get sausage because I feel like it’s more bang for my buck. Both bacon and ham seem to be thin/not worth compared to sausage. & The odd thing is, I tend to get scrambled eggs as well even though I don’t mind eating sunny side up. I don’t really have a preference of eggs, I like them both equally. I just have a habit of getting scrambled for some reason, and the occasional sunny side. All about how I’m feeling that day, hahaha.

Eggsmart also serve lunches, more on the side of sandwiches and sliders with weekday lunch specials. Soups, salads and wraps are also available here! Although I don’t usually come to places similar to this for lunch… Maybe one day 🙂 . 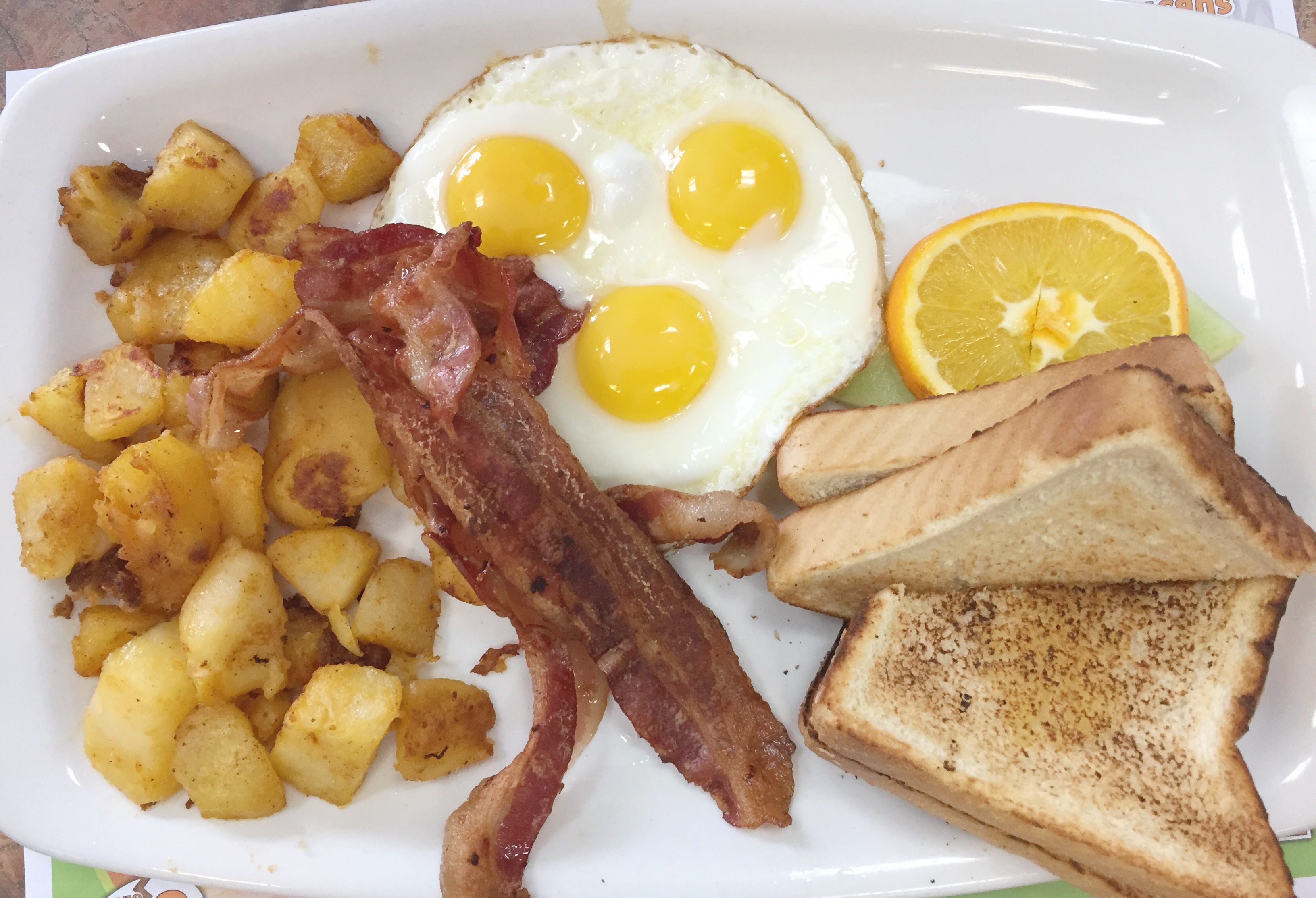 Classic breakfast with 4 pieces of bacon!

Our food arrived together, and the waitress also provided a tray of spreads for our breads. We split our meat, so we would both get 2 sausages and 2 bacon each. I like variety when it comes to eating 🙂

Not a fan of these home fries, they were mushy and not a fan of this texture and taste of potatoes. Think I got used to the crunchy type of home fries instead.

& Personally, I like chewy bacon, which is hard to find that texture whenever I go out to eat. I tend to get hard bacon – I don’t mind crispy bacon – so yeah. I’m just stating… Do I have to tell the waitress that I would like chewy, soft bacon with my order to get that texture? Do people do that? Let me know if you know! 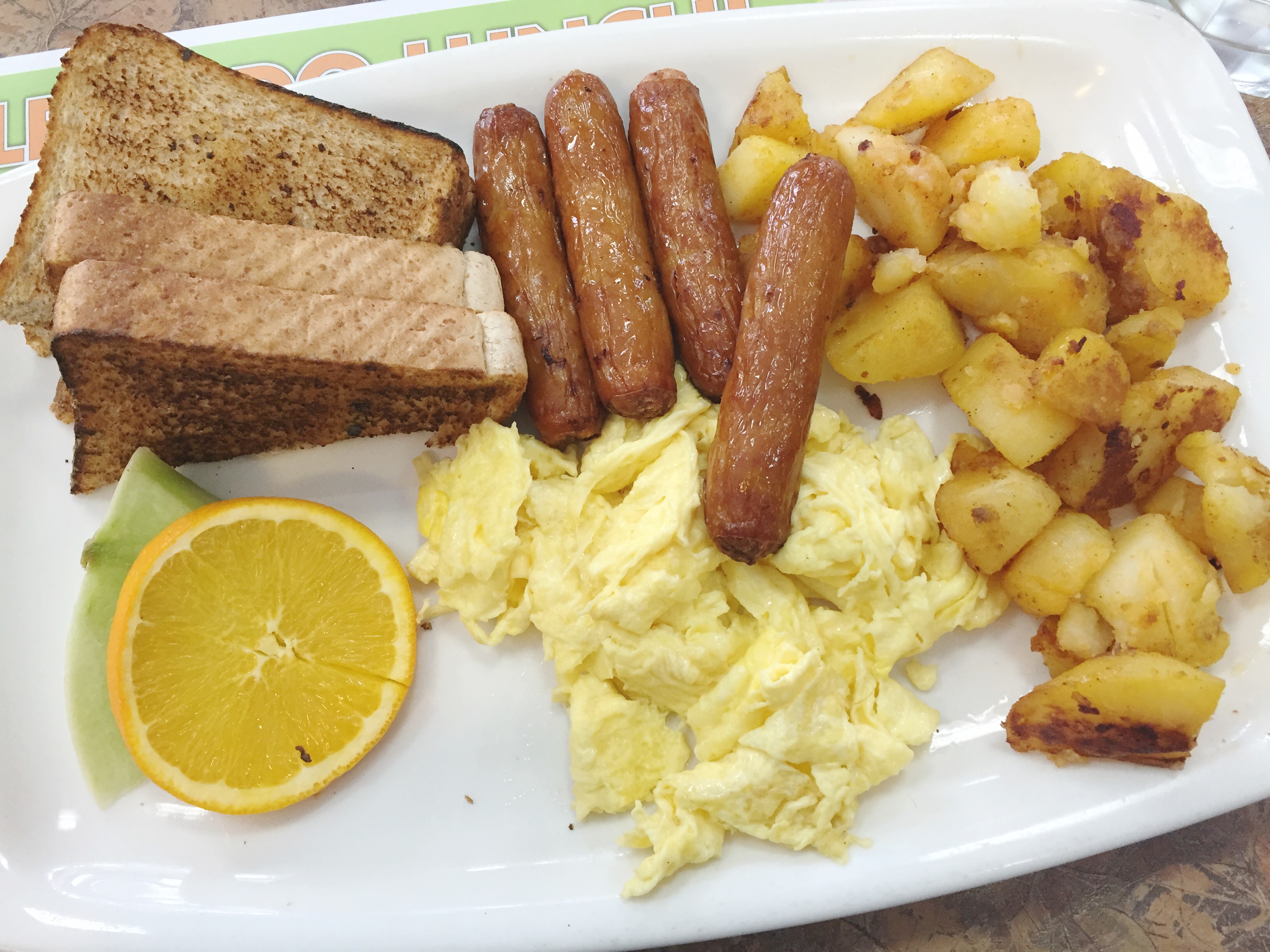 Classic breakfast with 4 pieces of sausage~

Overall, Eggsmart was good because of the early bird deal. With that price for that portion and extra piece of meat, it was good. However, comparing to all of the other breakfast places I’ve been to, I feel like Eggsmart would be on the bottom of my list because of the overall taste of food. Don’t get me wrong, everything was good. But other places like Panagio’s {review: here and here} or Markham Station, either had a better price for their breakfast deal or just had food tasting to my liking (like the homefries).