Adventure Cove is located on Sentosa Island and Sentosa Island is an island just off the coast of Singapore. You can get there by either a monorail from Vivo City, by foot or by cable car!

I went by the cable car route – the view was astounding and definitely safe. The air up there is fresh and calming. For those who are worried, these cable cars are pretty stable and do not shake much. The transportation is smooth and had no bumps or jumps. 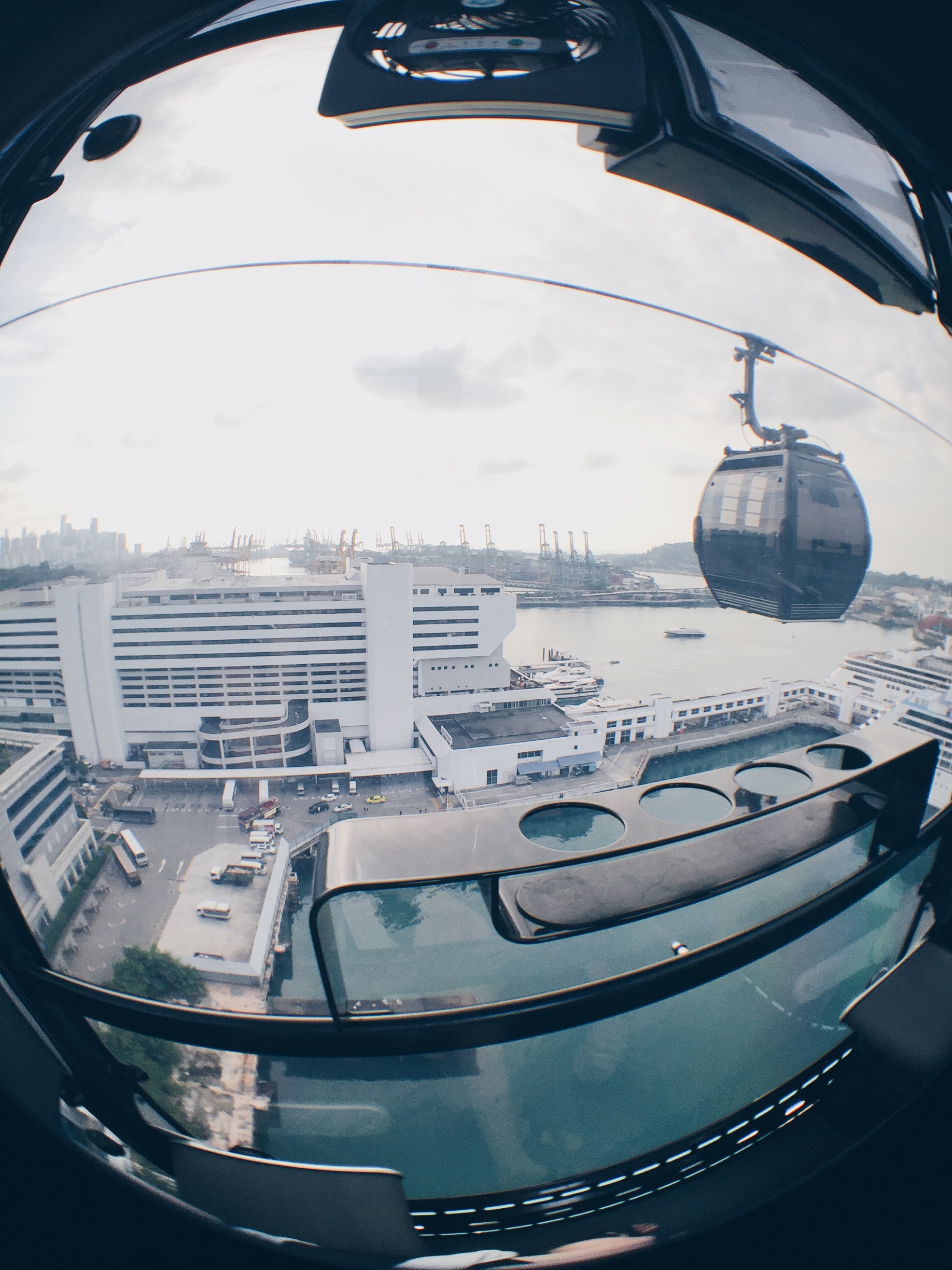 You can see some of the attractions they offer down the island. This is Adventure Cove from above! 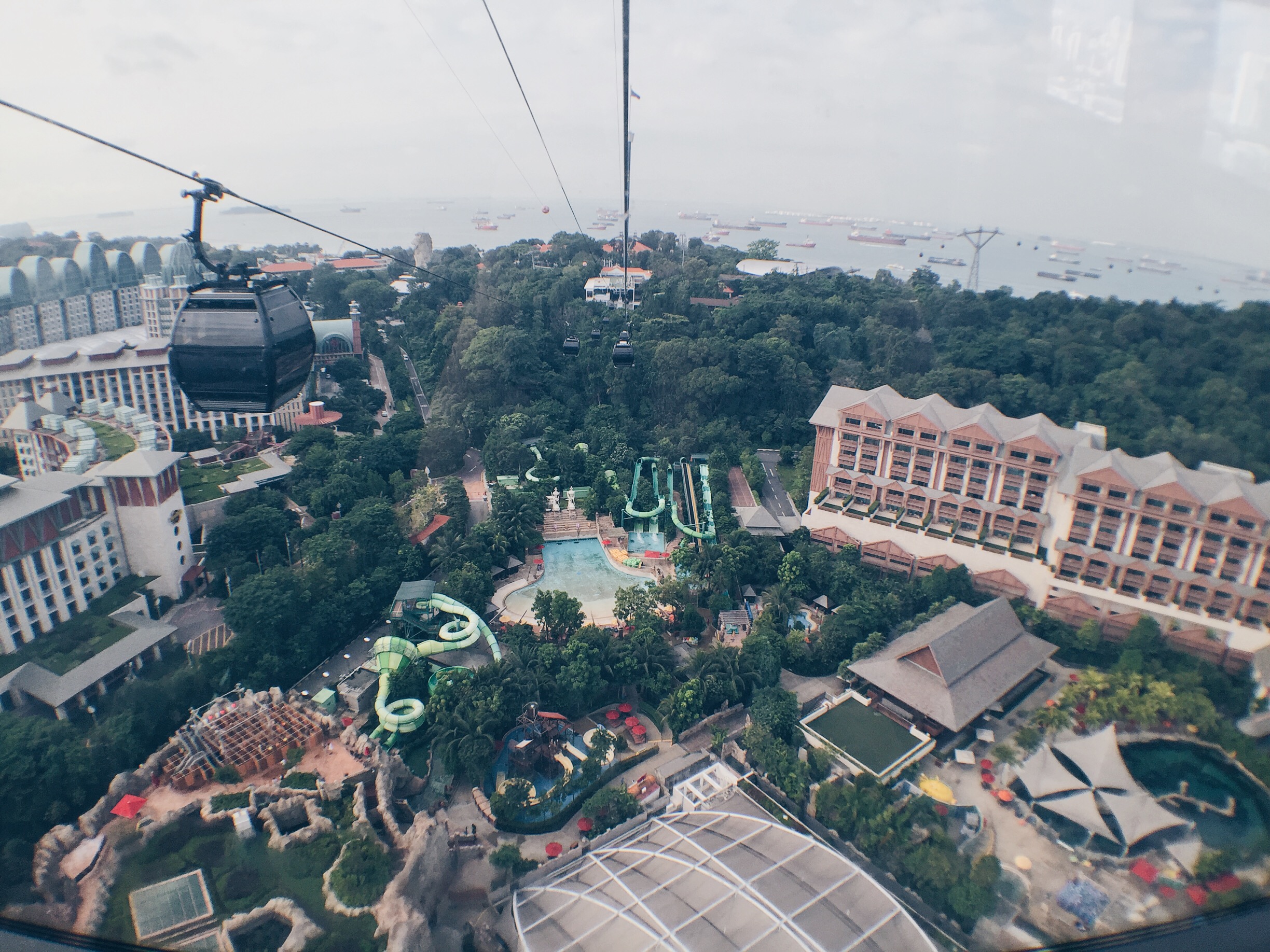 On top of Adventure Cove!

Once getting off the cable car, a shuttle bus trip is still needed to get to Adventure Cove. Bus took awhile about 15 minutes and didn’t exactly follow the time schedule listed… 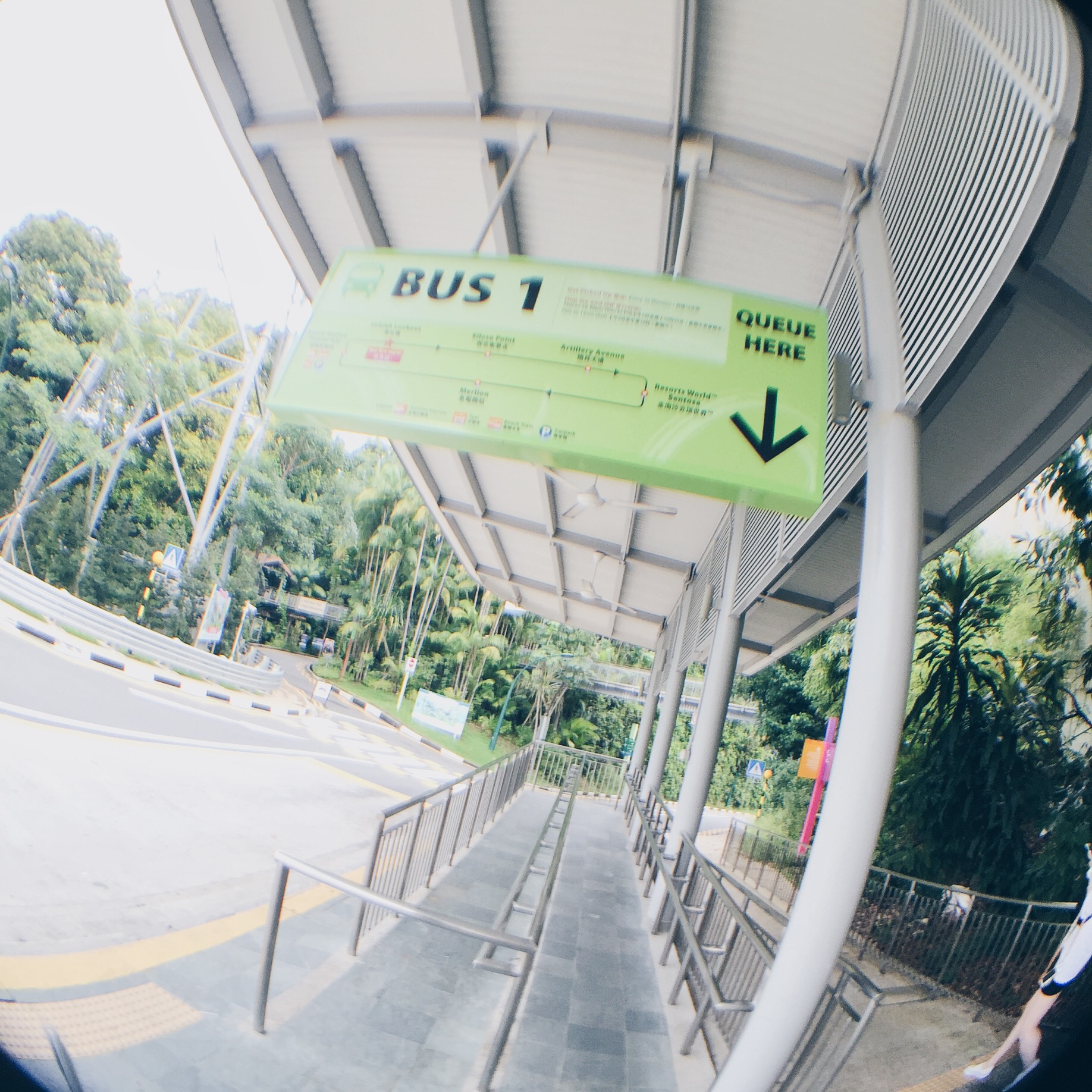 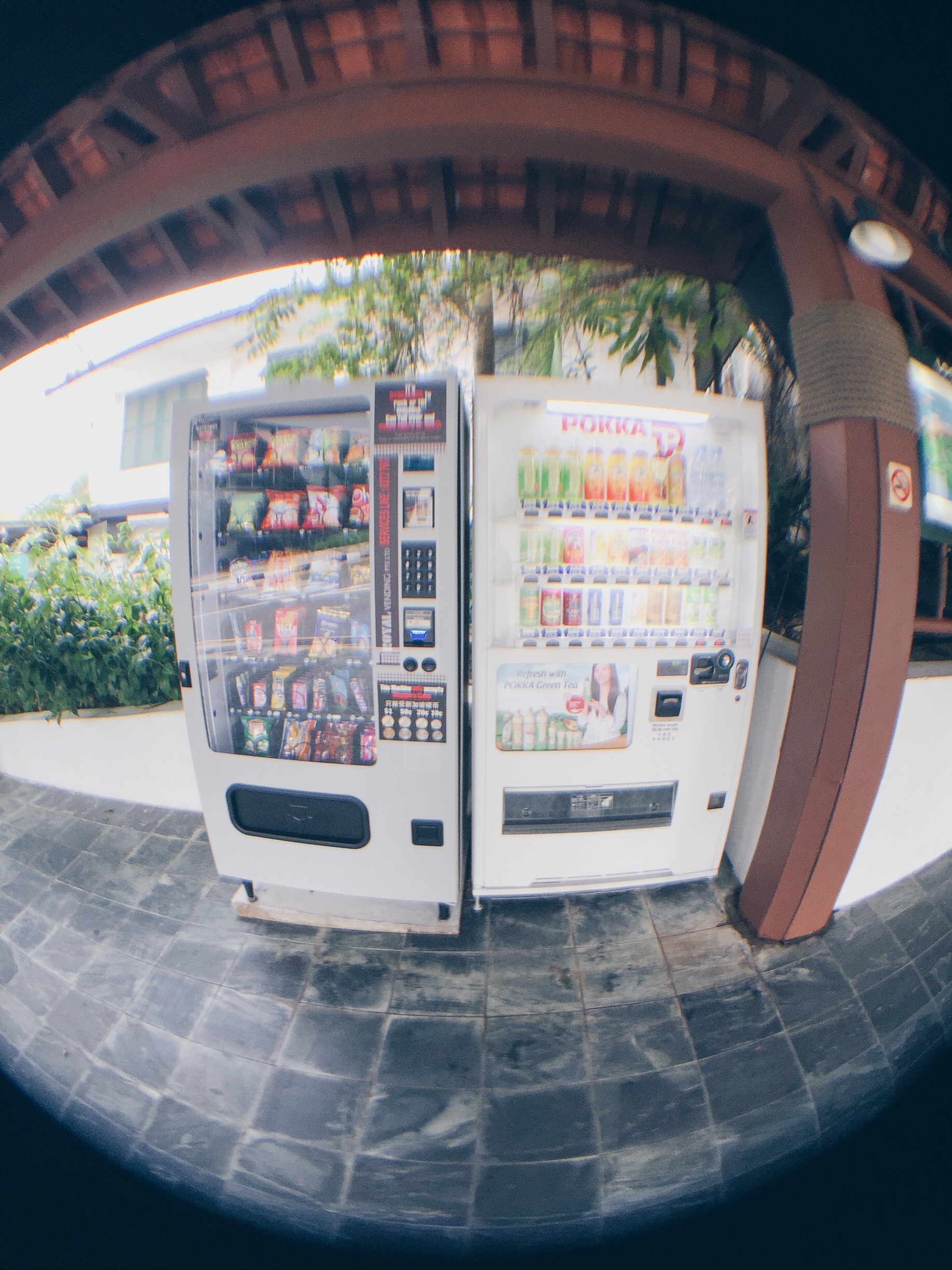 The bus is of a really old school which brings nostalgic feelings and definitely allows you to view the then and the now.

Be wary of your stop as the shuttle bus stops by all around the island. It kind of lets you see other spots of Sentosa, like the Merlion.
There were plenty of maps, pamphlets and instructions throughout Sentosa! Or if anything, you could always double check with the bus driver about your stop/destination. 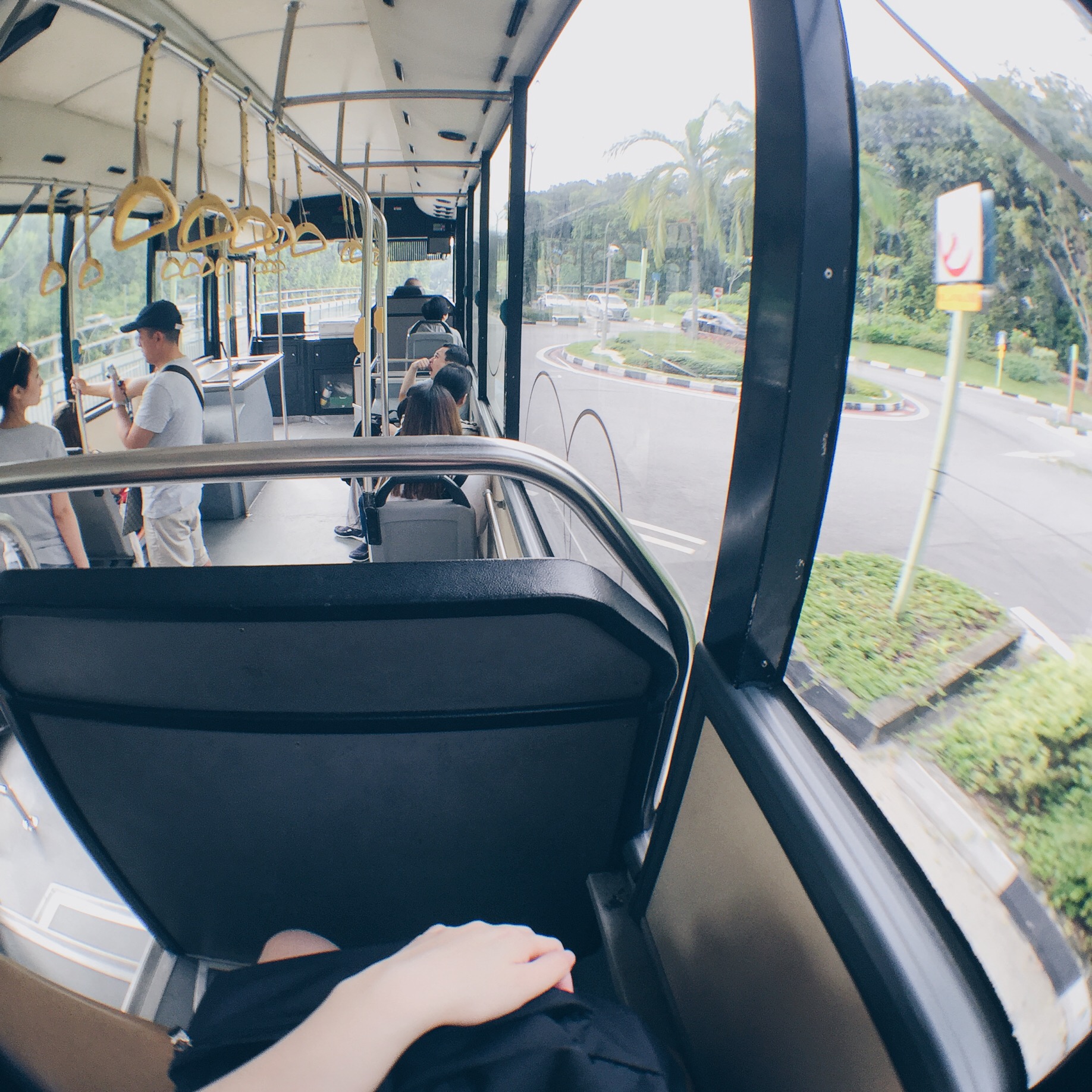 Our stop was a popular one, as it was the same stop as the Casino and Universal Studios Singapore (USS). Adventure Cove is just a slight walk from the bus stop. 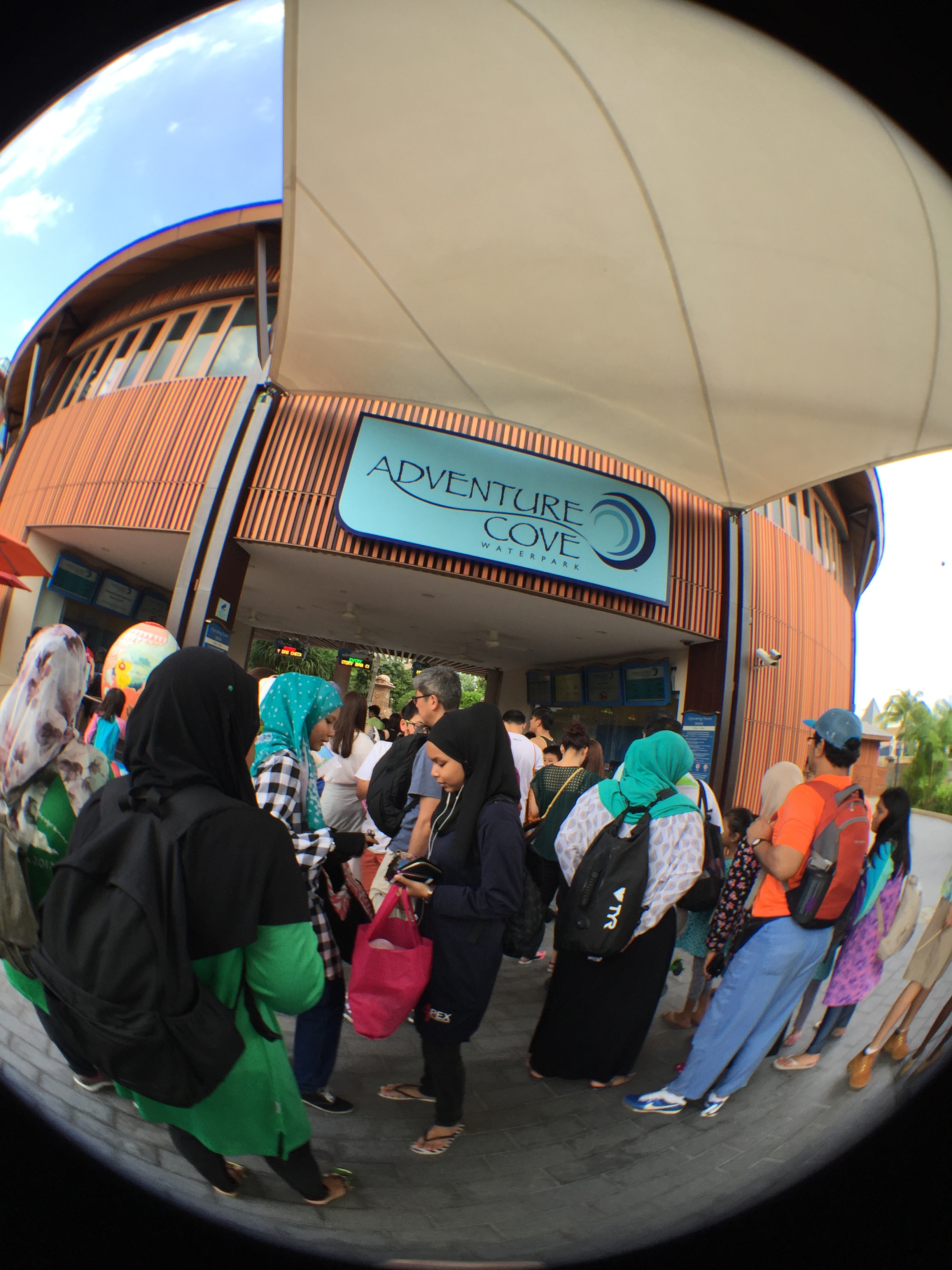 Once in, you’re greeted with this entrance!! It got me excited in this water park!!

The lockers and change rooms are on the left-hand side of this photo. It’s quite noticeable once you enter in. Lockers are automated and easy to use… Best to have cash. There is an ATM machine but who knows how much surcharge you have to pay, so yeeep. Always bring cash!

Change rooms were amazingly bright and clean. Singapore in general is pretty much known worldwide to be a clean city. The white decor and natural lighting from above really make the change rooms stand out.

There is also pamphlets showing the entire area of Adventure Cove which I only found out at the end of the entire thing.. boo. 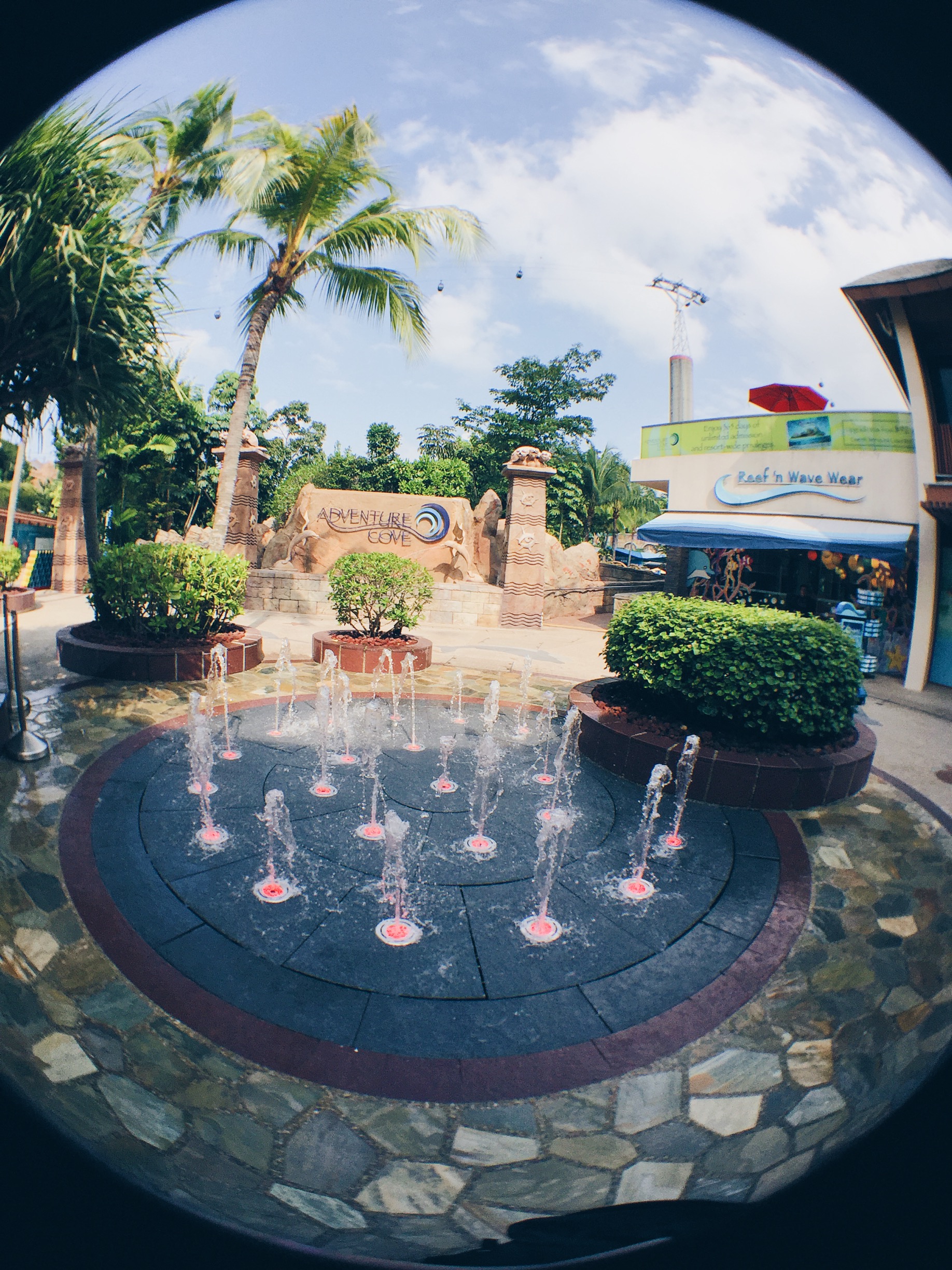 So… I didn’t take photos after closing my locker because I didn’t have a waterproof case!

But the first thing we did was to go to the snorkeling area also known as Rainbow Reef. You are required to have the knowledge of swimming because this tank is extremely deep and they have an array of fishes!! It was amazing to see even from just standing about the tank. I couldn’t see crap because I had to take off my glasses with the diving mask and snorkel on. The line up was bound to be long so we went there first and there was no wait at all! Perks of arriving early and doing research, hahaha.

We went through a few of the rides, but one area had a super long queue and we skipped that. It was the Riptide Rocket which is Southeast Asia’s first hydro-magnetic coaster!! Sad that we missed that out but it was honestly waaay too long and we just decided to skip out. Probably another one that you should head to early before the crowds!

Each ride has little cubbies that allow you to put your slippers, glasses and items before going on the ride – which is really nice. But it is unsupervised, just saying~

Some areas such as the area with dolphins and stingrays cost more..

I think my favourite was the lazy river. Contrary to a regular lazy river, Adventure Cove really outdid themselves with the imitation decor of the cave, waterfalls and forest with noises of frogs and insects. There is also a part of the lazy river which most people camped at because you can see dolphins hopping, fish tanks and stingrays! I had the opportunity to see an employee feed the stingrays – it was breathtaking at how big some of the stingrays were.
& All that from the lazy river alone… I felt like that alone was a pretty good value when going to Adventure Cove.

Briefly showered and changed into regular clothes and headed out. We spent about a good 2-3 hours at Adventure Cove, I believe.

The exit out of Adventure Cove is through the souvenir store — and we took a good 10 minutes trying to find the exit because it pointed Exit in the same direction but we expected it to be a totally different area instead of the souvenir store………. sigh.
Pretty good tactic from a business student’s perspective but from a first timer at Adventure Cove, I was annoyed at this structure. 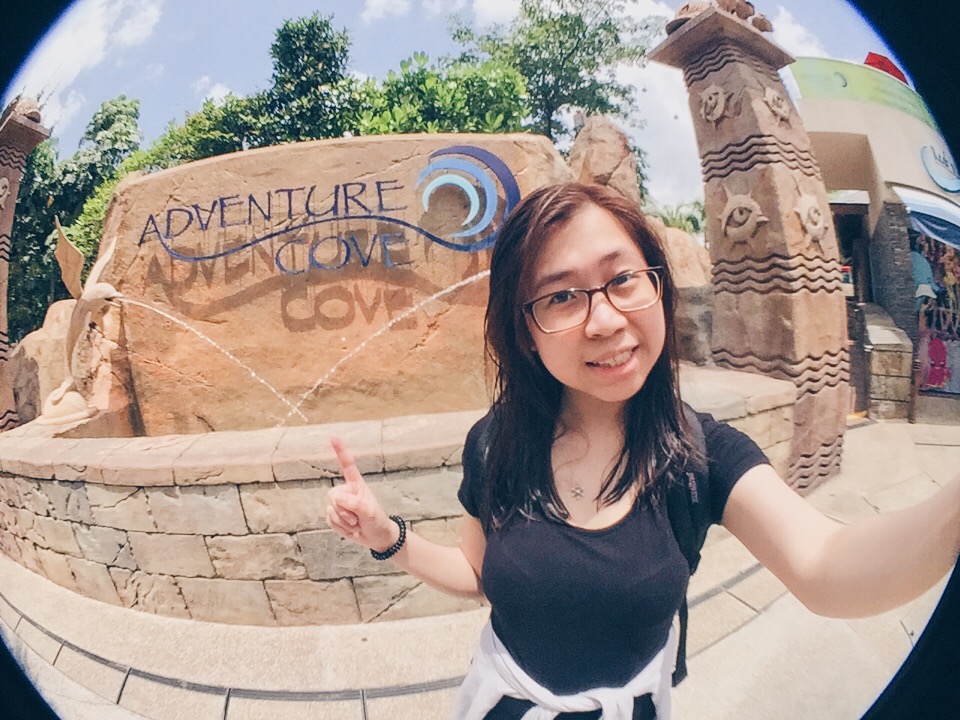 Went back by the shuttle bus and was satisfied and tired from the water park~
As we were heading back to the cable car to head back to Singapore, we stumbled upon a roaming peacock! Beautiful colours and exquisite tail, definitely a sight to see. 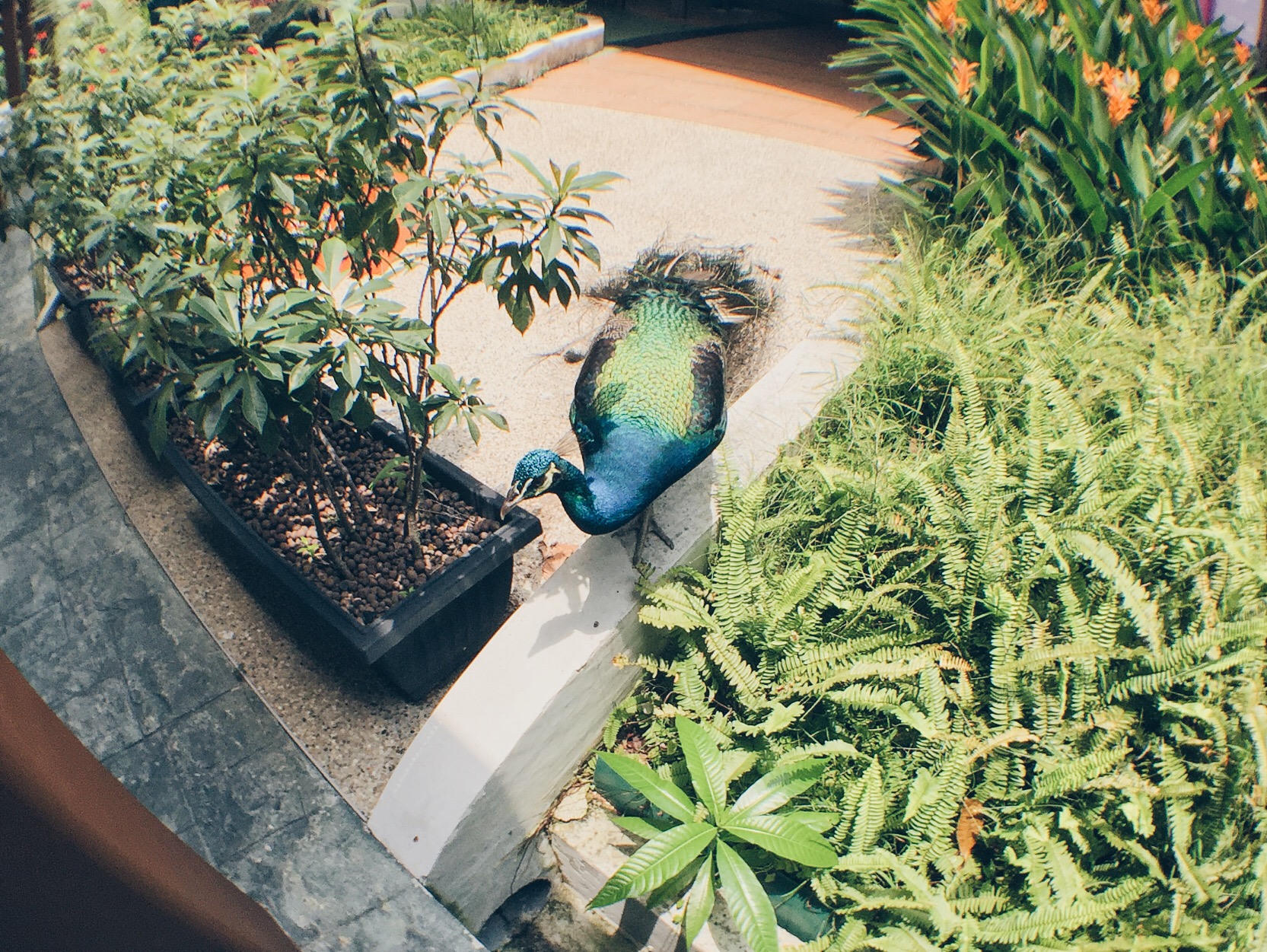 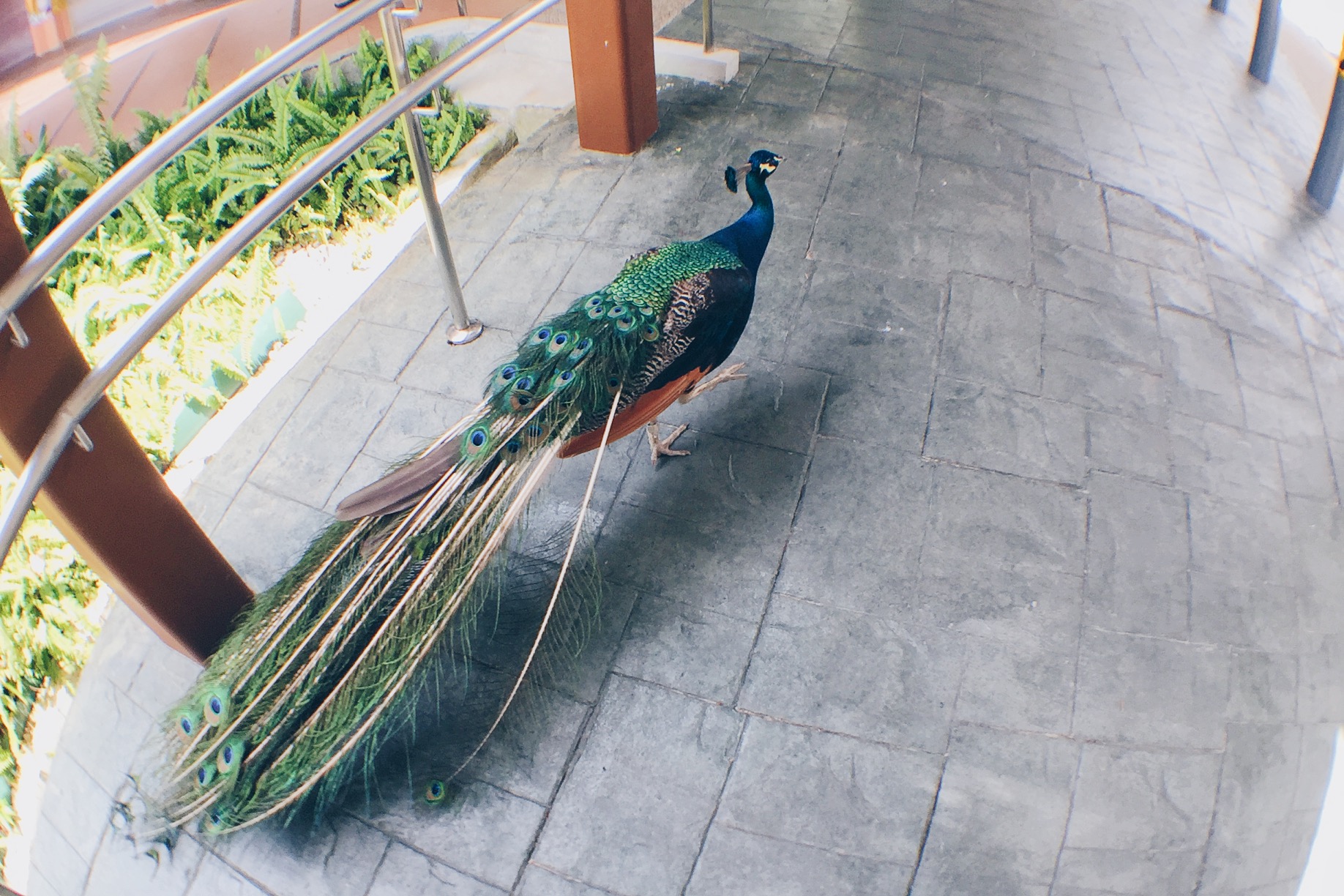 As our cable car pricing included the entire way to Mount Faber, we decided to take a joyride in the cable car as the wind was pretty relaxing too…

From above, I saw some people biking and roller blading on the streets. 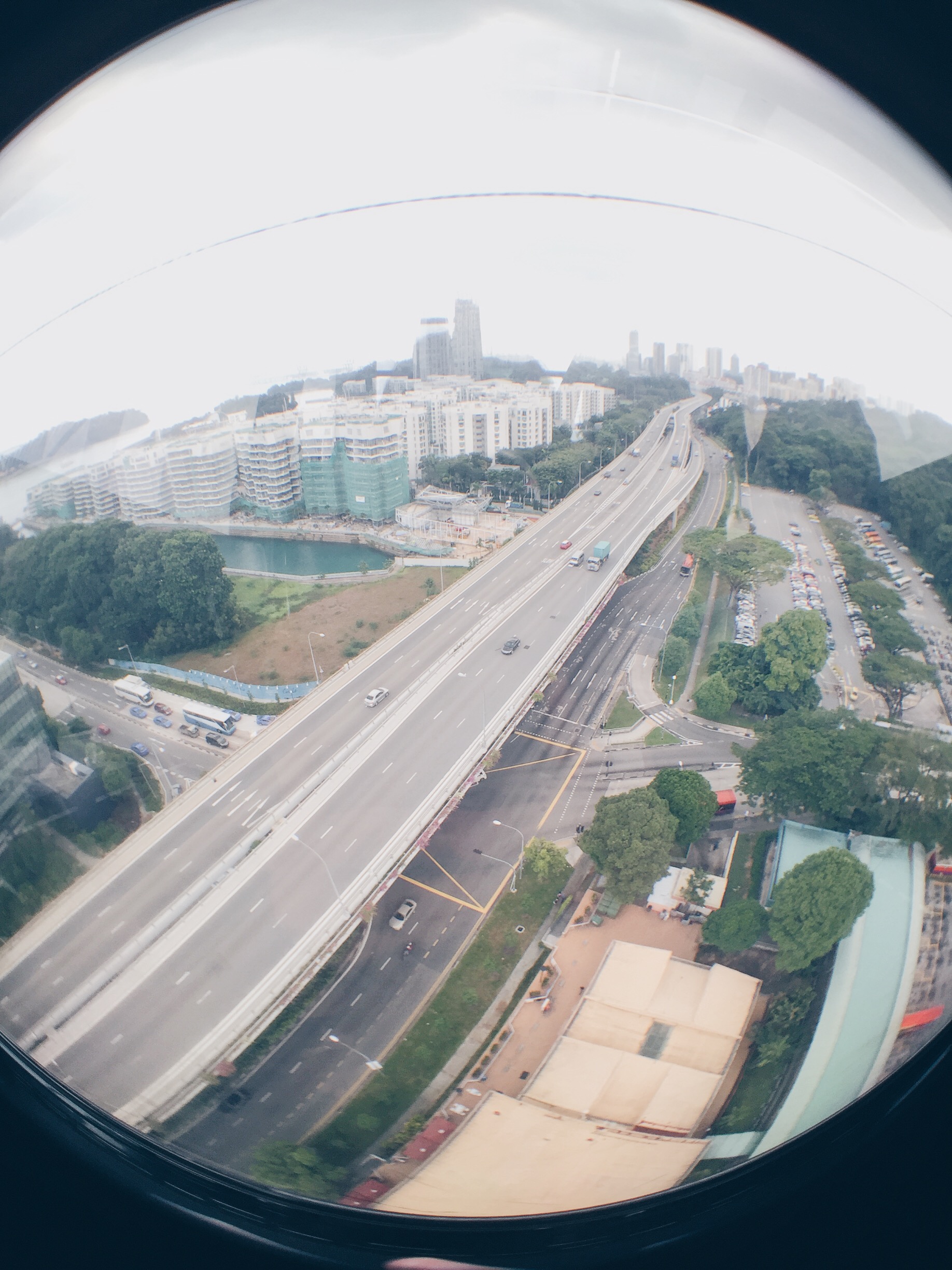 On the way to Mount Faber…

Overall, I had a super awesome time at Adventure Cove. The signage and direction at Sentosa was fairly easy to navigate to get to Adventure Cove. On the way to Adventure Cove, you also get to see the big Universal Studios Globe, and you can explore a bit more if you’d like. Taking the cable car helped sealed the entire trip as a great one. There are also a lot of employees that are willing to help both in Sentosa and Adventure Cove.

Personally, I like water parks and always had fun but my eyesight really limits it as some water parks have strict rules but Adventure Cove is more flexible because they allow clothing (like tshirts or shorts) instead of enforcing swim-wear only.

Some side notes/tips:
– You should bring your own towel, change of clothes, and if you want – you can include shampoo and soap to shower at the change rooms
– Wearing your slippers/flip-flops around the water park because the floor was burning hot!!! I regretted not bringing my slippers while going about 🙁
– Definitely go to either the Riptide ride or the Snorkeling area as both would most likely have the longest lineup
– Best to go early in the morning as it will get crowded to get to Sentosa, and not to mention, longer lineups for everything else

And if you’re not interested in water parks, Sentosa Island is still a great place to go to! Not to mention, Universal Studios Singapore is located there as well 😉