Despite the weather, I still love eating ramen!

Here at Hakata Ramen, the seating is pretty tight and tiny. We sat at the only “big” table which seated 6 people.

Greeted with welcome in Japanese, we took our seat and looked at the menu. Personally, I really enjoyed the decor of Hakata Ramen because it looked really unique compared to some of the other ramen places that I’ve been. 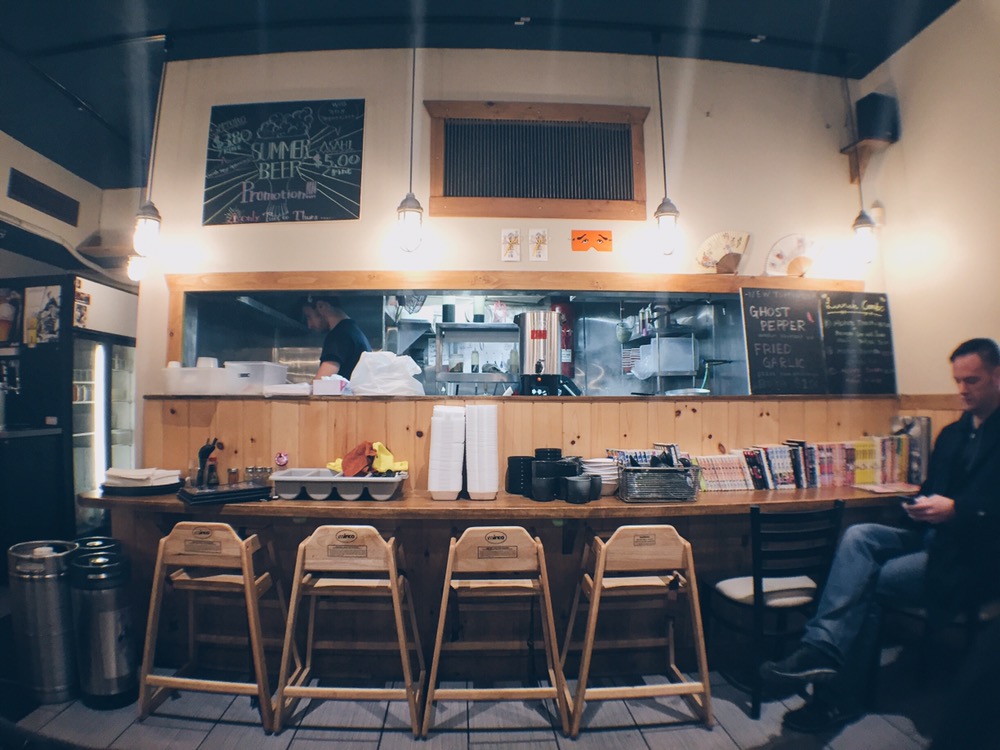 To be frank, the menu didn’t have a huge selection, as they specialise in Tonkotsu Ramen with only slight variations of it. However, they do offer more toppings for an extra cost, shown in the back of the menu. You can also choose to have wavy or straight noodles for your ramen 🙂 !

They also serve Ghost Peppers here, if you’re willing to try that. I saw a video of someone eating ghost peppers and I am terrified of what it does….

We ordered the Chicken Karaage to share and that came last among all our ramen. I really liked it!! It was crispy on the outside but the tender meat was chewy on the inside. It was also prepped fresh as it was piping hot when we got it.
I believe one of the sauce was mayonnaise and I’m not sure what the red one was.

I ordered the Red Hot Tonkotsu Ramen which was roughly the same, except they have a special homemade spicy sauce/paste and chilli added towards the dish. The paste is seen on the spoon given, in that huge lump. I tried the paste before mixing it, and it tasted really bitter and horrid… But after mixing the paste with the broth and it tasted great 🙂 !

During our time at Hakata Ramen, the place was only tended by 1 server. He had to take orders, clean up, attend to cash as well as serve us the noodles when the time calls for it. Surprisingly, he spoke pretty good Japanese as well because we overheard a customer who interacted with him in Japanese and their conversation was flowing smoothly.

I actually enjoyed my time at Hakata Ramen. The ramen filled me up nicely as my dinner, and the broth was quite tasty as well. I kind of wish they had more ramen choices as they only had about 5 options and maybe 2 don choices in their menu.

Nevertheless, I still enjoyed my time here, but I don’t recommend going in a huge group!