Fushimi Inari Shrine is probably one of the most popular photos showcasing Japan with it’s thousands orange torii gates. But this area is bigger than I thought.

Most of these pictures were on the base level of Fushimi Inari.

Sadly when I went, it was a shattered my expectations of getting really nice photos of the torii gates. For some reason, I thought the time we went (which is about 9AM) was going to be quiet, but boy, was I wrong.

It was busy there and tons of local and foreign tourists alike. People swarm in the front to take pictures of the first torii gate that begins the path. The first path was actually about a 10 minute walk to the 2nd main area of the Fushimi Inari.

The 2nd area was more of a souvenir area, along with another purification fountain there.

This is where the hike comes.
There were signs depicting of the hike of Fushimi Inari, as the top of the entire hike which is about 2-3 hours, shows the landscape of Kyoto from above and is said to be very beautiful.

However, 2-3 hours takes a huge part of our day out since we had a full day of schedule for Kyoto since we were only there for 2 days. So we decided to take a small hike up towards the midway point, which apparently has a good view as well. But alas, we took the wrong route and somehow ended on a quiet route and it led down to the main area of Fushimi Inari.

For me, since I don’t usually hike, that hike was quite tiring and is quite humid out there. I feel like this was worst than the time I went to MacRitchie in Singapore.
Be ready to sweatttttt!

On the way, I saw this employee(?) carving and painting the symbols onto the donated torii gate – which was pretty cool. 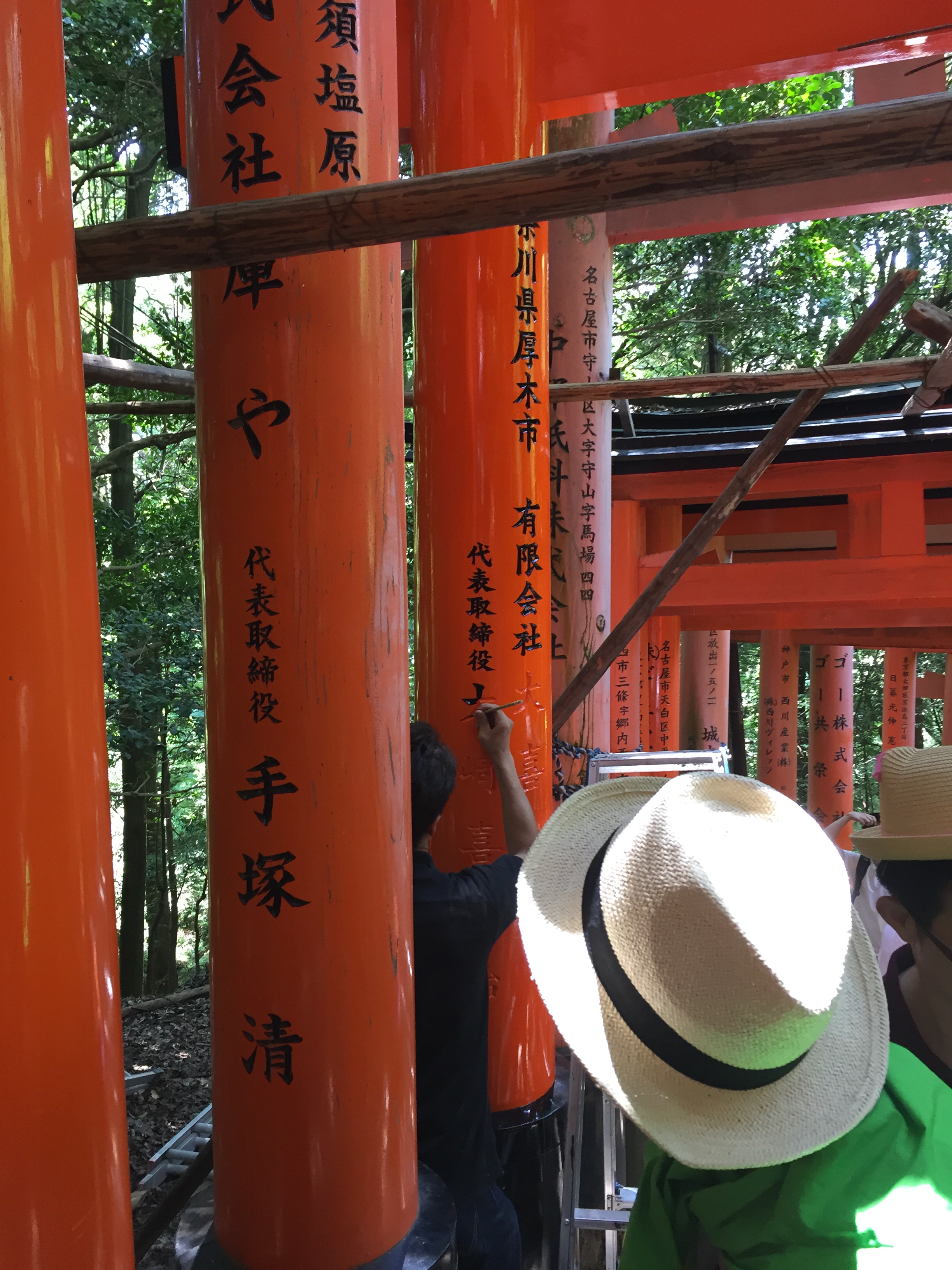 The quiet route that we wrongly took shown a different side of Fushimi Intari which I liked or just simply away from the crowds :/ .

We stumbled upon a creepy area (like legit creepy even with the sun out), more minature shrines with cat statues and dog statues, a residential area (in the middle of the shrine area? eh?) and some small souvenir shops.

However, a tip for you guys and my future self if I ever visit Kyoto again, is if you want to beat the crowd, you really have to come really early, maybe like 6-7AM. No joke!

I think the crowds really turned me off but I still enjoyed myself there and immersed myself with fascination of the orange torii gates. Fushimi Inari Shrine was on my list since forever and crowded or not, I’m glad to have checked this one off my list 🙂