The Toronto Catering Showcase (TCS) is the first ever city’s catering showcase, presented by EventSource that was held on Sunday, October 16th, 2016 🙂

I was fortunate to win tickets from @foodaholicsblog_‘s Instagram giveaway and went to the event!

Arriving at the event was so smooth and easy, tickets were scanned via an iPad (so cool!), along with free coat and bag check so it’ll be hassle free and you can freely eat to your heart’s content! 😉

With 12 caterers at this event with their food… let’s get on with it! 🙂

I tried both the Ahi Tuna Poke Bowl & the Crisp Wonton Bolso, they were both so good!
The Ahi Tuna Poke Bowl had a good chunk of tuna pieces, and all the fillings mixed together well in the bowl… Though it was slightly sour at the end due to all the sauce at the bottom. But you can never go wrong with tuna and avocado 🙂
The Crisp Wonton Bolso was tasted like those crispy shrimps you can get from dim sum, but with the crab fillings and the corn + chili corn mayo together? It was heaven! The wonton purse wasn’t too hard and the texture was just right for each bite 🙂 ! 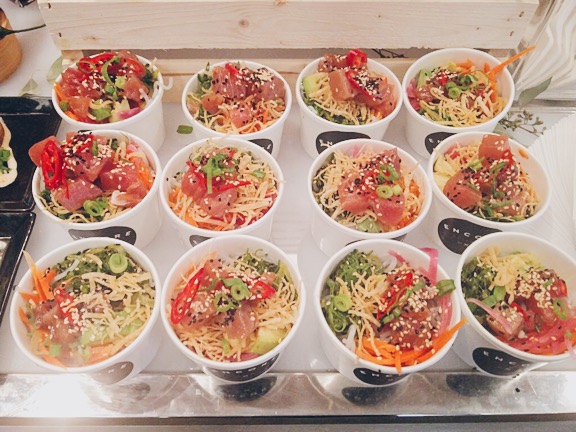 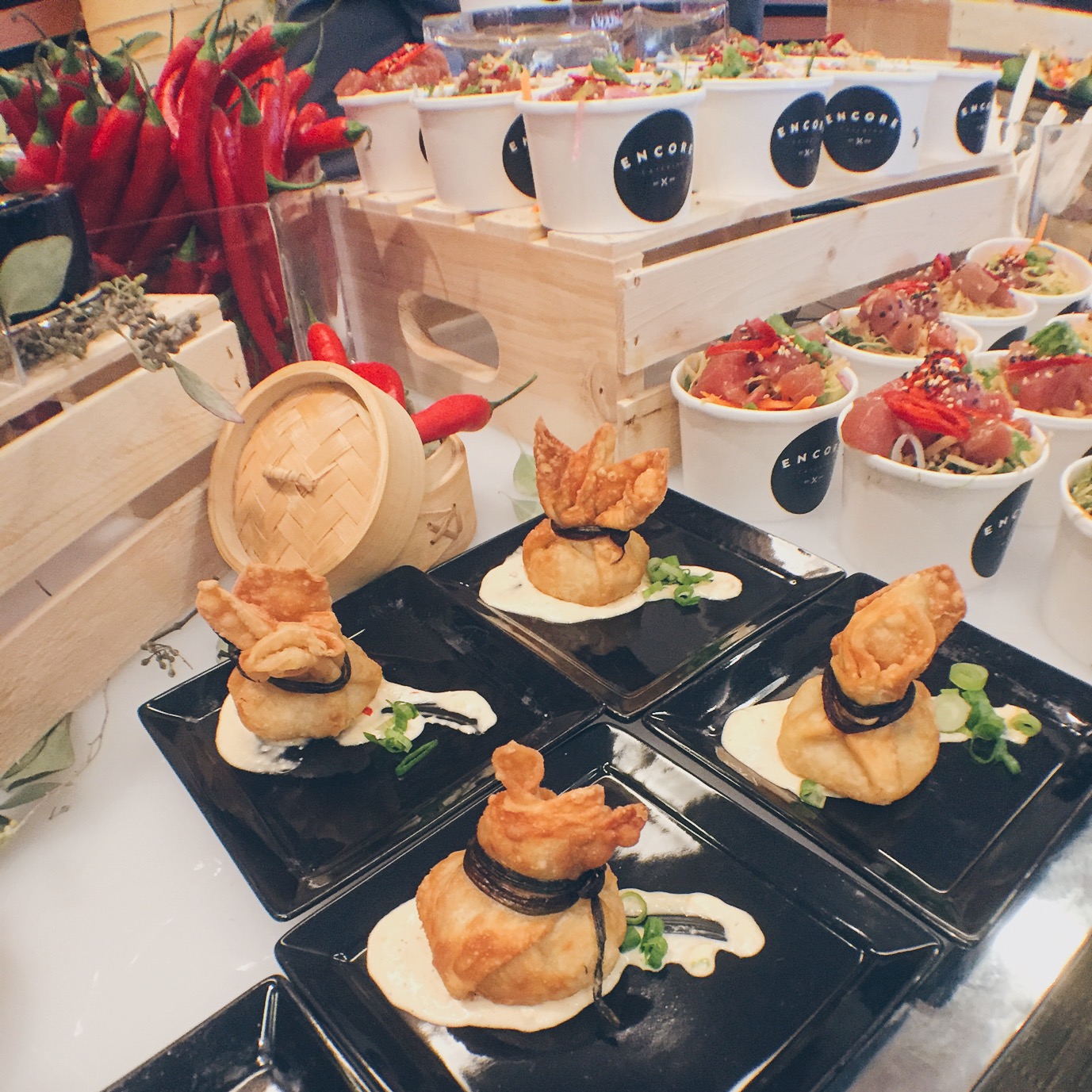 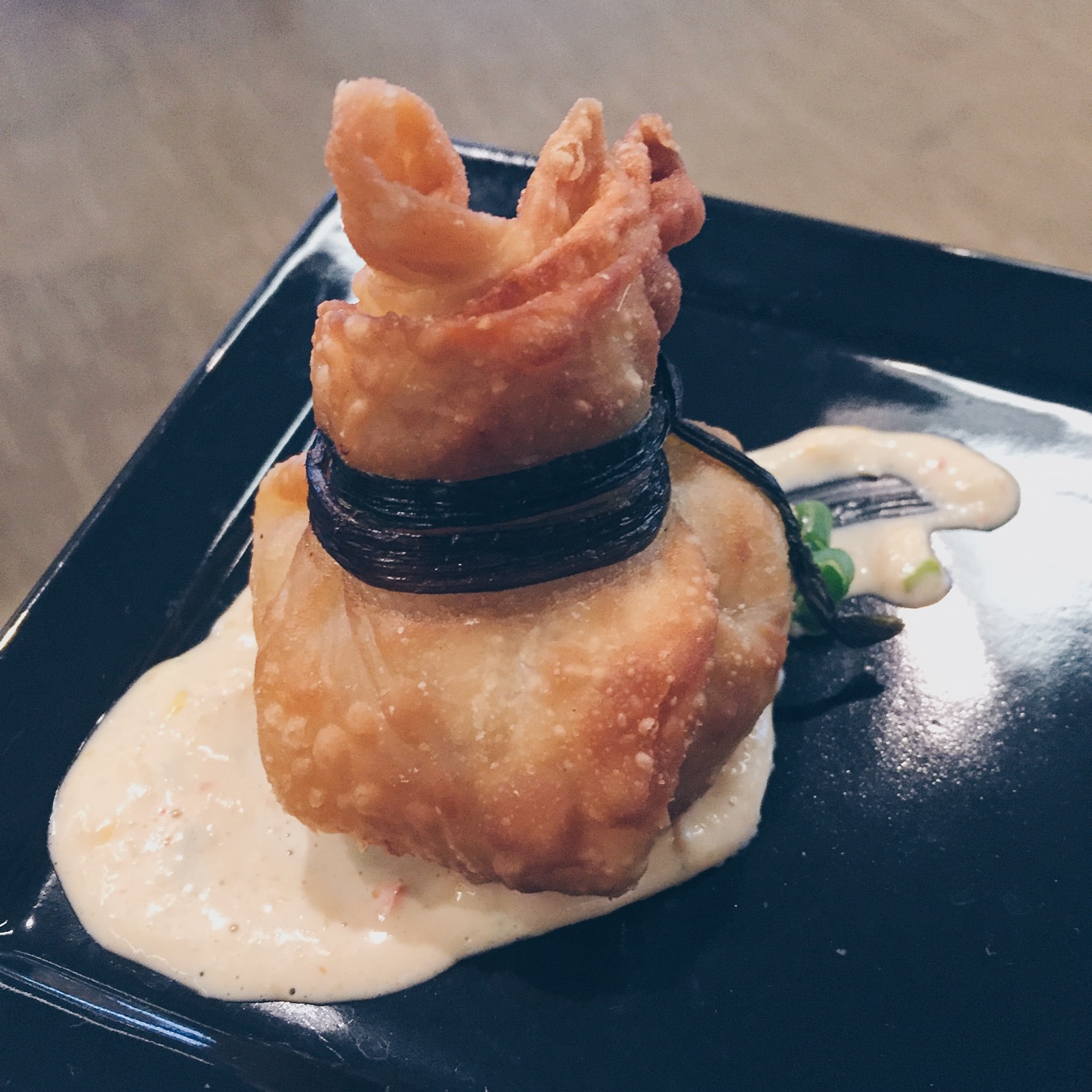 I tried both the Gnudi and East Coast Duo. I was planning to come back for the Pumpkin and Ontario Ricotta Cheesecake after, but I got too full!

The Gnudi with Lamb Neck Ragu tasted pretty salty, even J mentioned it while eating it. Though the lamb neck was really soft and chewy, the overall meal was really salty. The East Coast Duo on the other hand, was probably one of the best dishes in the event! It was the only meal I had twice.

Perhaps it’s because I really enjoy seafood, and the East Coast Duo encompasses it all. Both the scallop and lobster were chewy and yummy, the puree tastes almost like mashed potato, the granny smith apple and celery leaves gives the meal a crunchy texture as a contrast towards to the soft and chewy texture of the scallop and lobster. & I love bisque as well…
Basically: this dish was made for me. Hahaha. 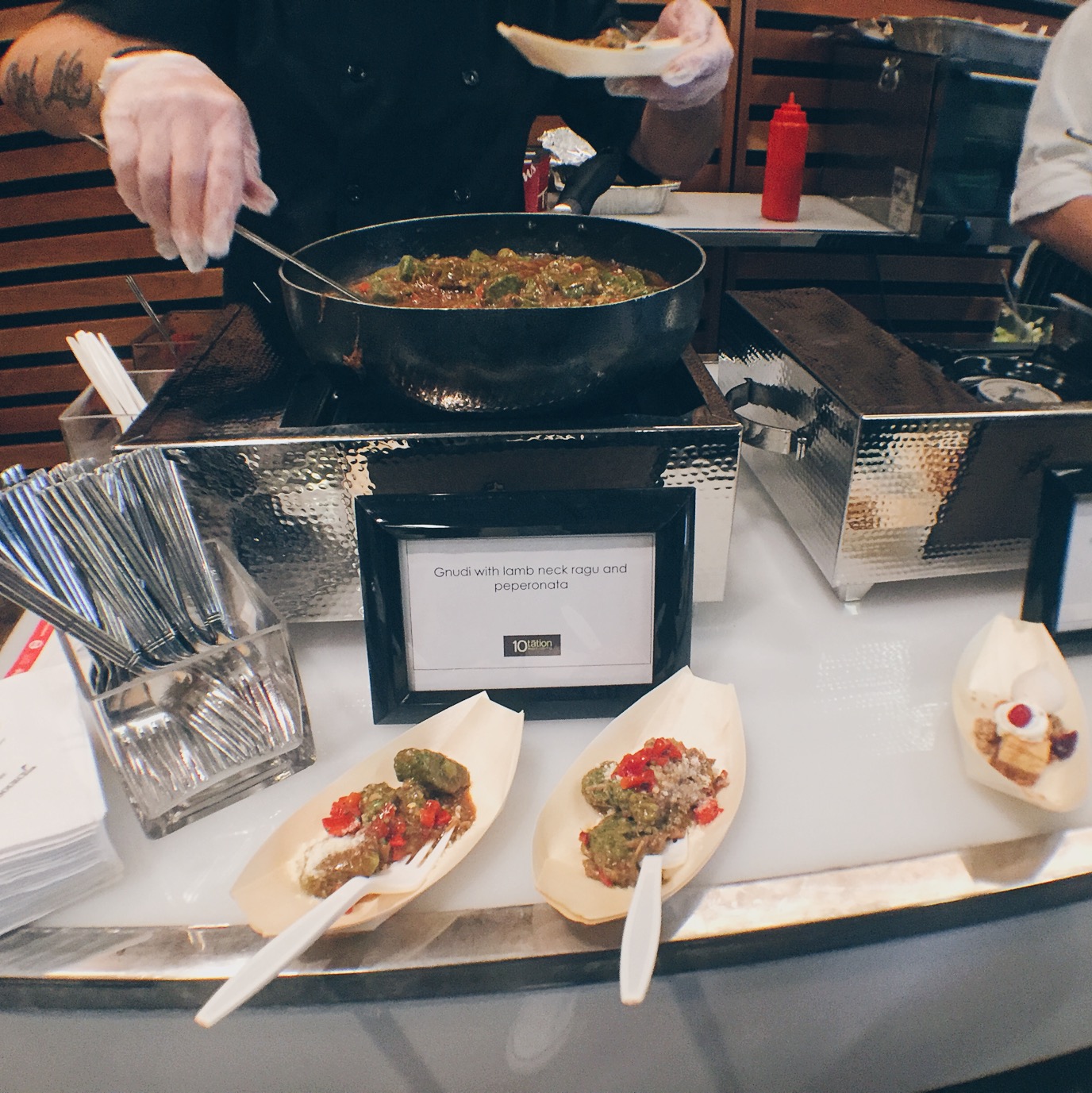 10Tation, serving up the Gnudi with Lamb Neck Ragu and Peperonata 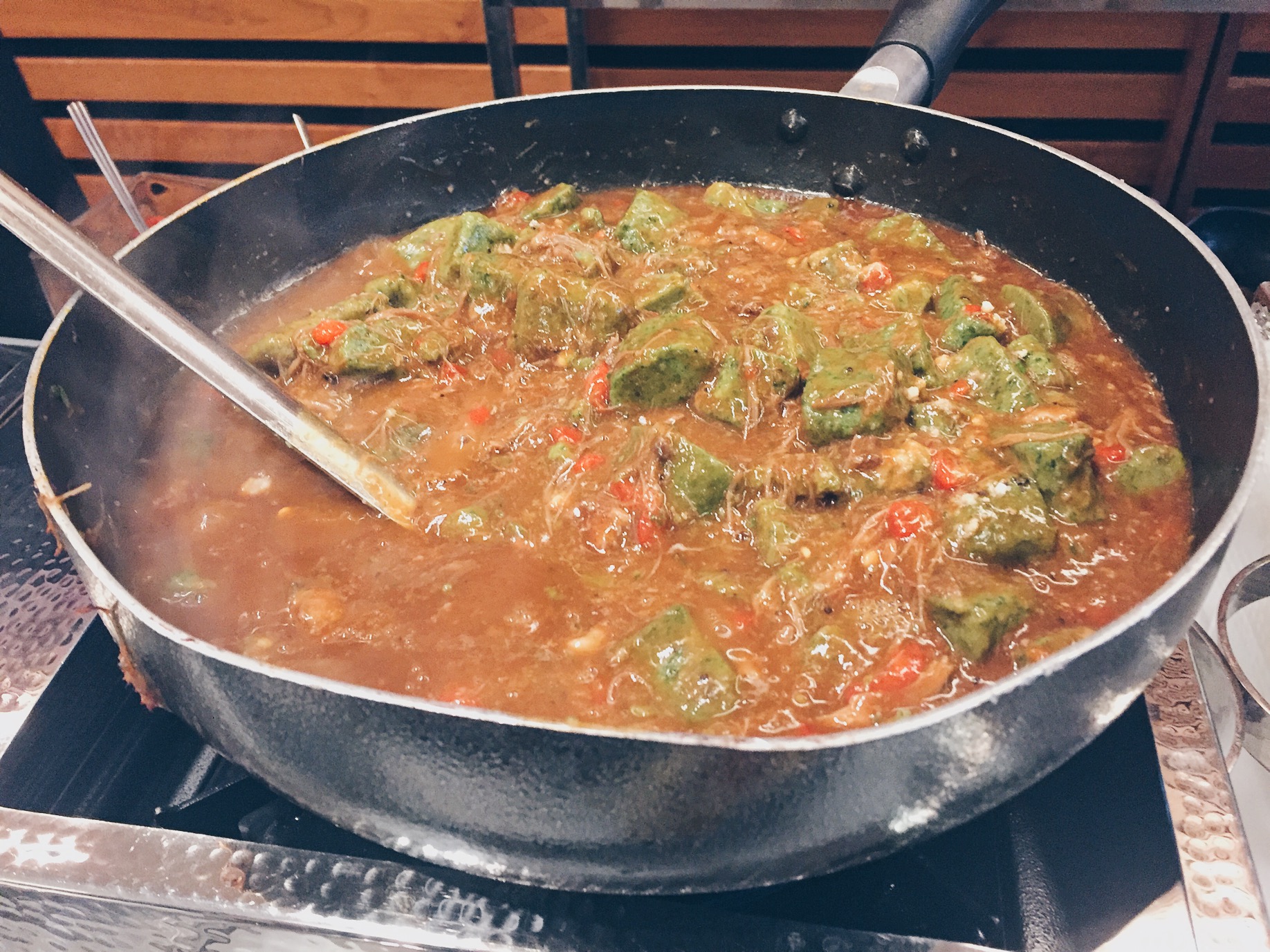 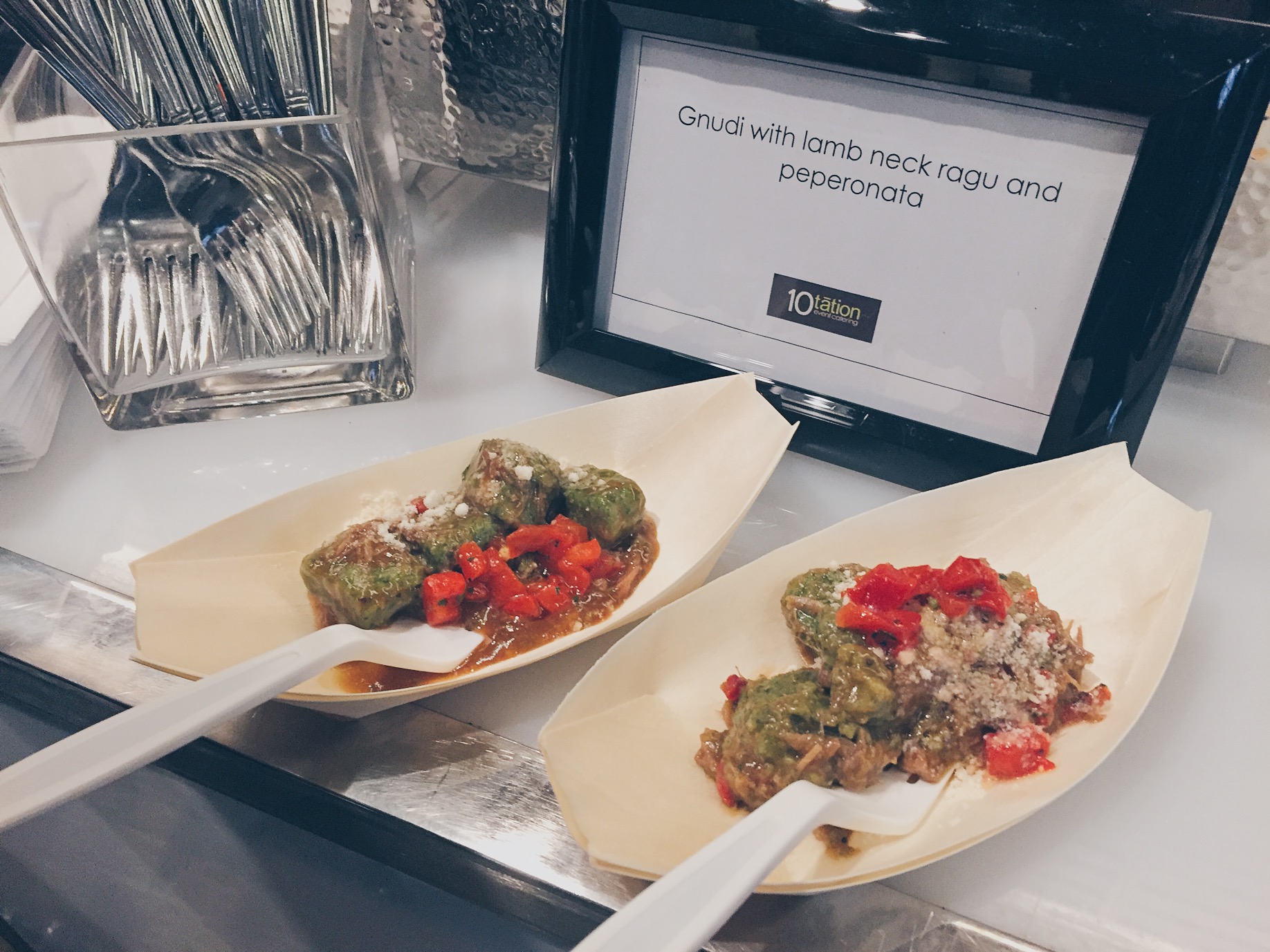 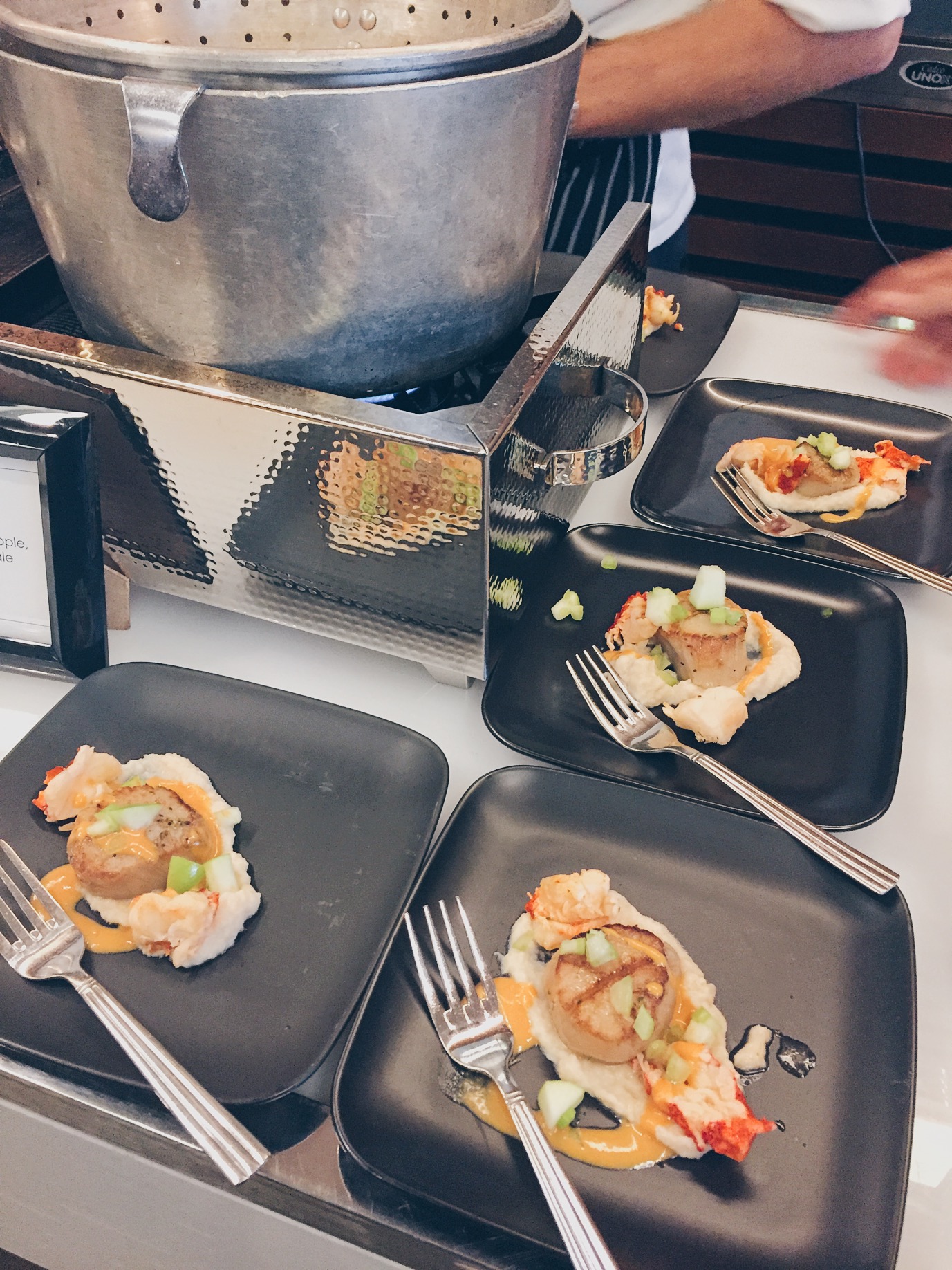 Servings of the East Coast Duo 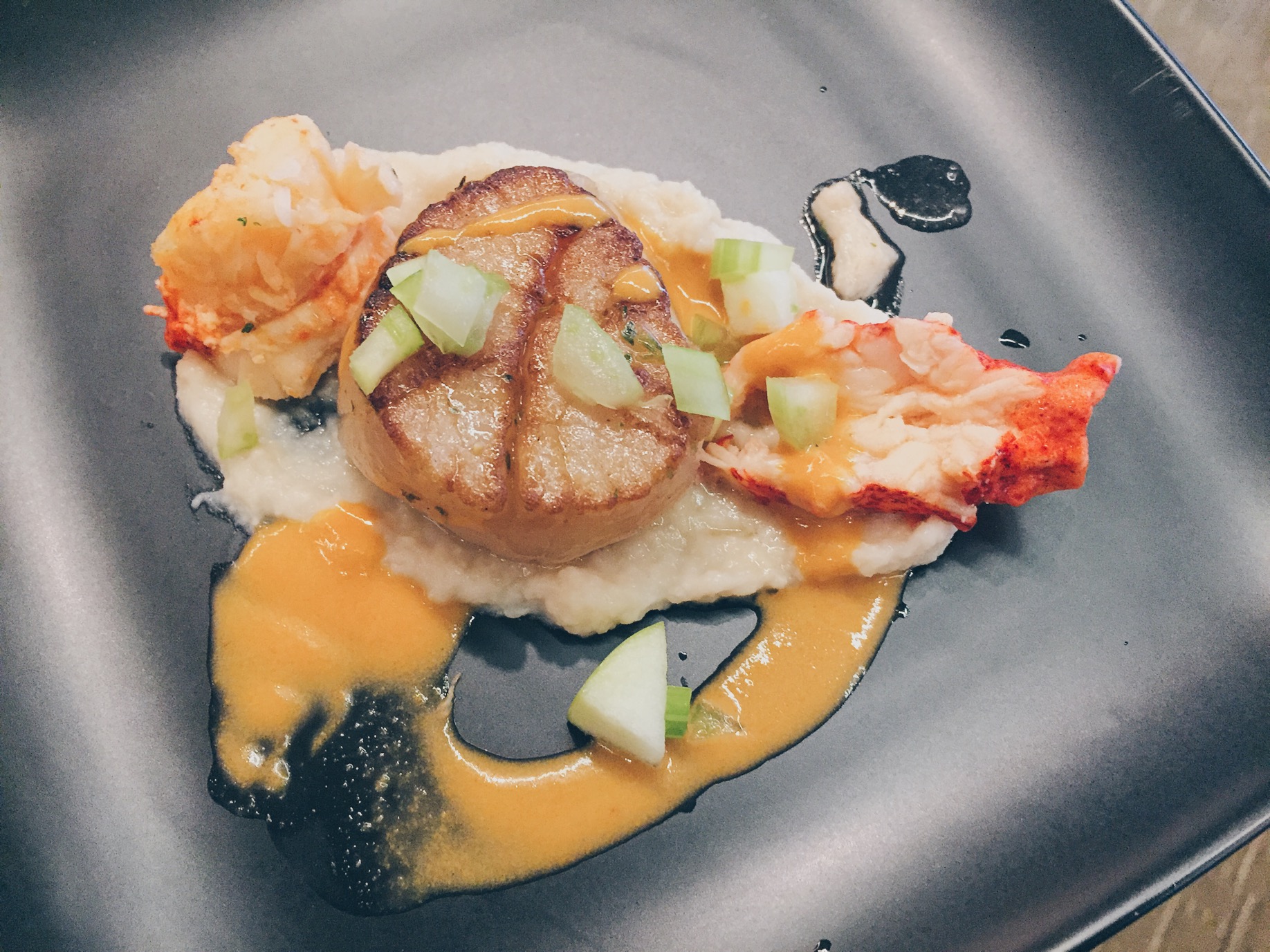 Presidential Gourmet had the most aesthetically beautiful decor and the presentation of the desserts definitely stood out among all the booths.

They had both bite sized food and desserts going on!
They were presenting the Sushi Taco, which was a crispy wonton with sushi rice, miso sake shrimp, pickled ginger, scallion and sesame aioli & the Savoury Candied Pork Belly which had smoked cucumber, pickled shallots on a Hawaiian pineapple bun. Their sweets were a Matcha & Yuzu White Chocolate Bon Bon paired with a Green Apple and Speculoos Macaron.

I enjoyed the Sushi Taco quite a bit! Though J said it needs slightly more sauce, I felt like the piece I ate was just right. The crispiness of the wonton shell emulated the usual taco shell and you can taste the pickled ginger with the chewy shrimp. The Savoury Candied Pork Belly was decent as me and J tasted some sort of weird sauce while eating. Not sure if it was the sauce that was dabbed on or the taste of the pineapple bun, but it tasted pretty odd to us.

The Matcha & Yuzu White Chocolate Bon Bon was not my cup of tea, J had to finish up the bon bon for me. Personally, I don’t like Yuzu so perhaps that’s what strayed me away from it. I do love the texture of the bon bon itself, very creamy while the chocolate melts in your mouth. The Green Apple and Speculoos Macaron just tasted decent, although the macaron shell was pretty soft, not what I was used to. The little white dollop on the presentation was actually a marshmellow 🙂 ! 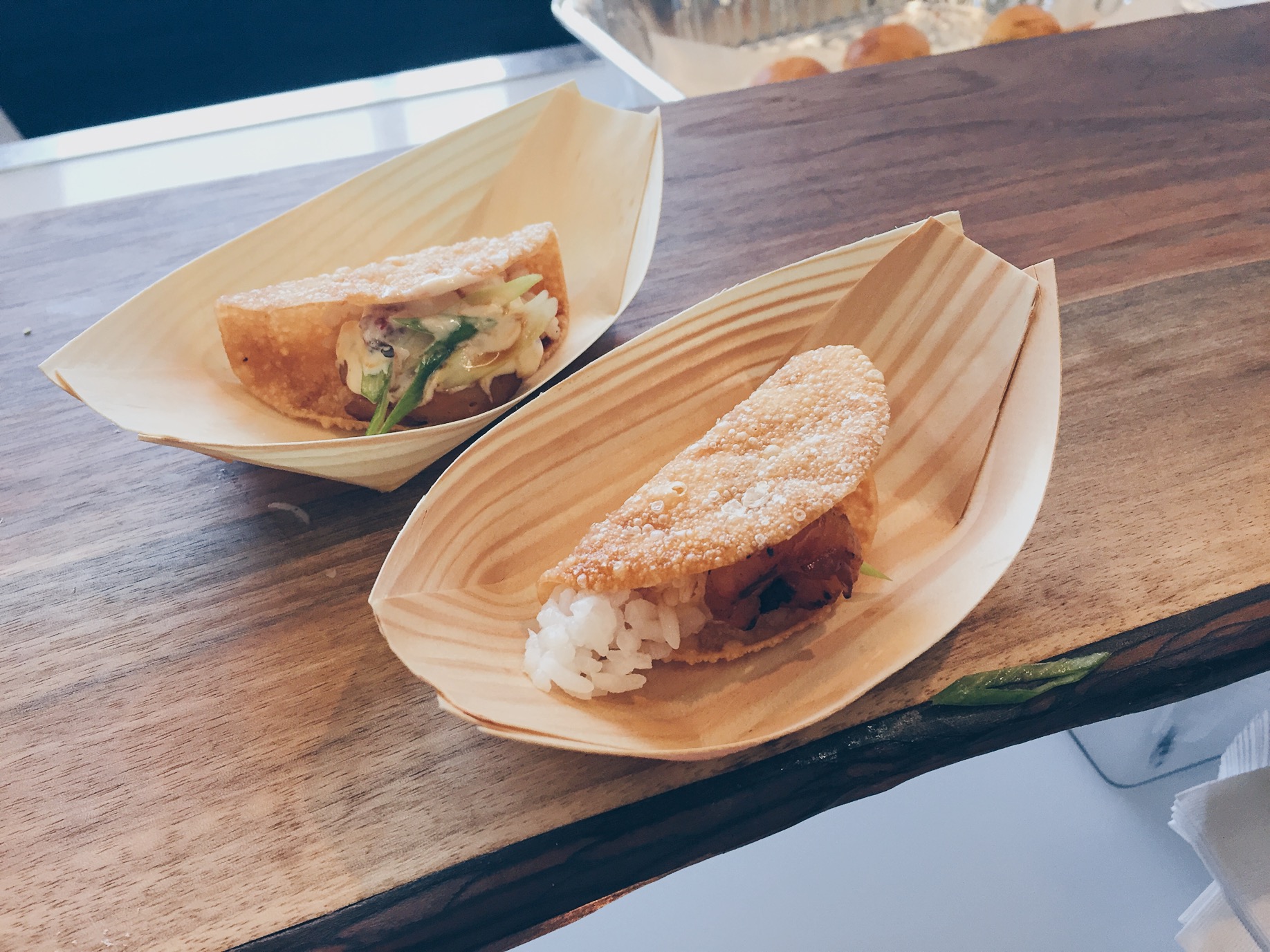 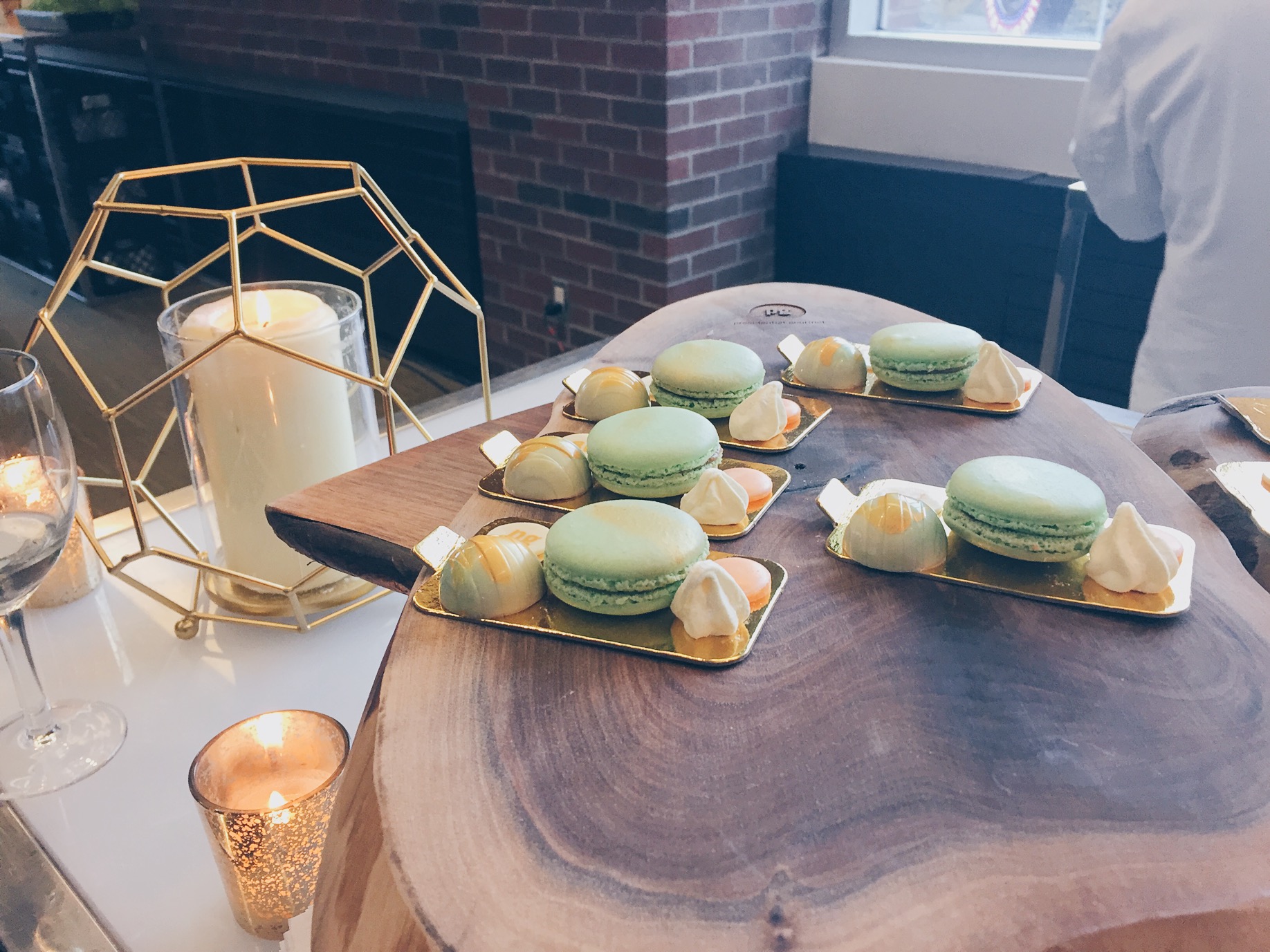 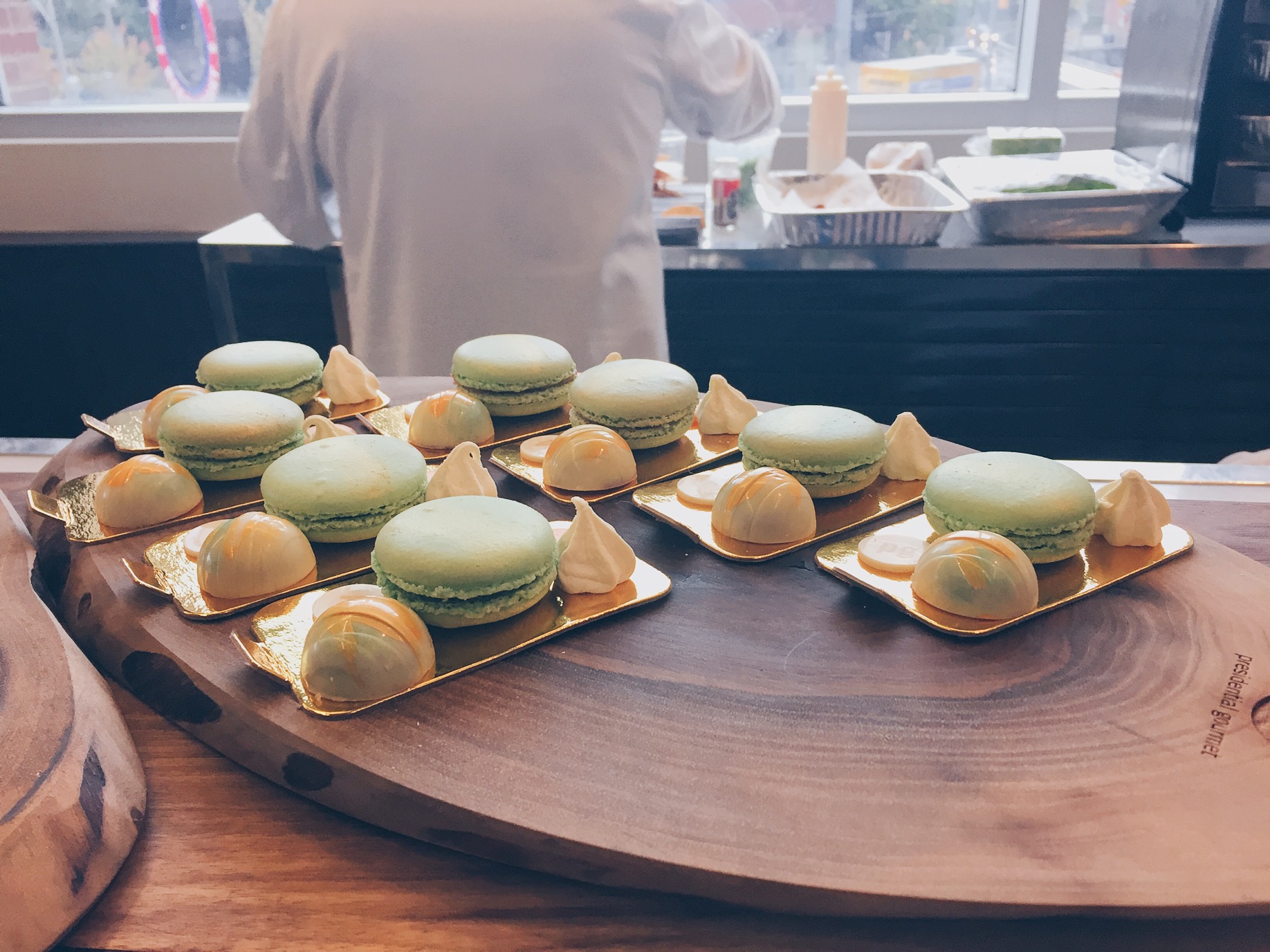 Food Dudes was serving up Shawarma Tacos which had braised lamb neck, greek yogurt, hot sauce, beet pickled jicama, feta, mint gremolata on tortilla strips as well as Veggie Tacos which was the same combination of ingredients except with fried goat halloumi instead of braised lamb neck.

I was excited for the Shawarma Taco, but only to be disappointed as it was salty as well. The feta cheese really overpowered the entire taco and added more of a salty and pickled taste, along with the beet pickled jicama… It wasn’t that great ): . 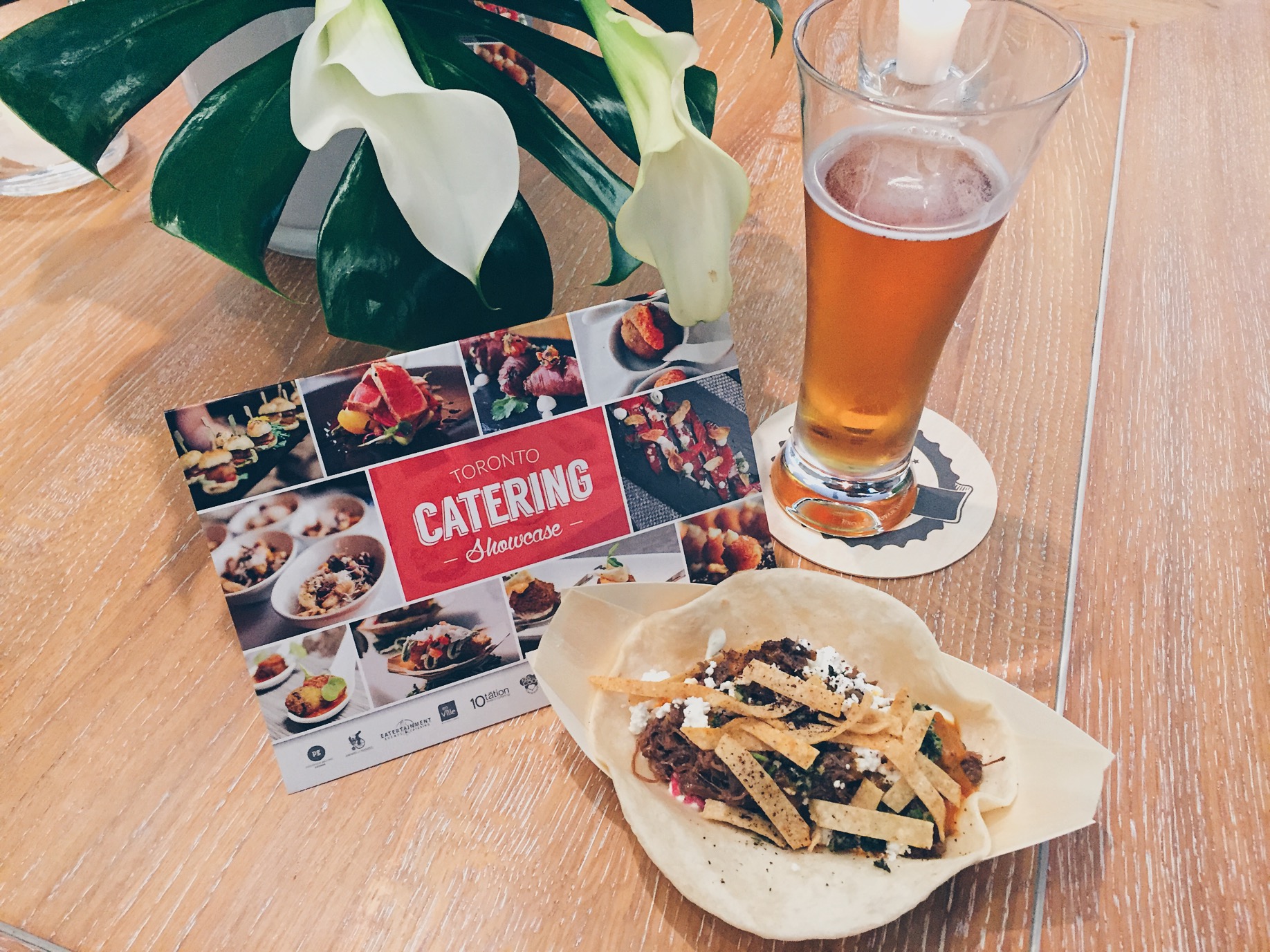 J got a beer from the bar, as TCS provided an all-you-can-drink bar with beer, wine, juice, and water. J tried out the Cosmic Cream Ale from Cameron’s Brewing. 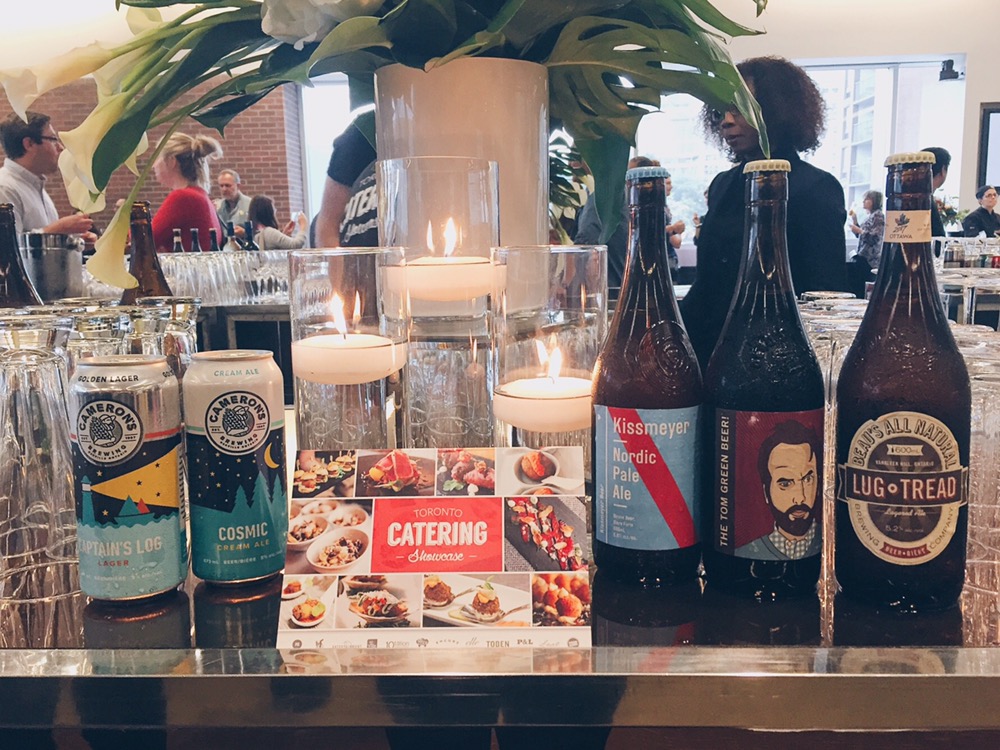 The highlighted Beers from the event

Eatertainment Special Events & Catering had two dishes going on: one was a Lemony Panelle with romesco sauce, grilled octopus salad with olives, peppers, frisee, arugula and chorizo crumble. The other was a dessert, a White Chocolate Arancini in Graham Crust with black pepper cherry compote and lemon balm.

The Lemony Panelle tasted just like a chunk of rice to me, and I didn’t taste any lemon flavour. I do enjoy the salad portion and the octopus bits 🙂 ! The same goes for the White Chocolate Arancini, nothing special.. tasted like a ball of rice (again), but me and J enjoyed the black pepper cherry compote! It was really delightful and had a good texture to it 🙂

I had high hopes of Daniel et Daniel since I knew they were a pretty big catering company and they did not disappoint!

All their meals and booth was in-sync with the Fall season, which was beautiful and awesome, I really loved it.

They plated 2 out of their 3 dishes together as a set, which was definitely something different compared to the other booths. The Roasted Butternut Squash and Arugula Salad with Brussels Sprout Leaves also included figs, fifth town capri blue and candied pecans with apple cider vinaigrette and in the pan was the Chicken Cobbler which had chicken, kale, aged cheddar, goat cheese, mozzarella cheese and sweet potato biscuits.
They also had Apple Pie, which was sous vide apple, pickled apple gelee, elderflower ice cream, pie crust ganache and quinoa barley granola… which I regret not trying now.

The Chicken Cobbler was so good!! The meat was chewy and easy to cut/bite, with the thick mix of the cheeses and biscuit was super creamy with the chicken! J liked the Roasted Butternut Squash and Arugula Salad with Brussels Sprout Leaves more, but I do like it as well! The Squash was so soft, it had french fries texture but obviously healthier, and the vinaigrette with the salad was great!
With this pairing together, it was almost like a 2nd mini Thanksgiving meal 🙂 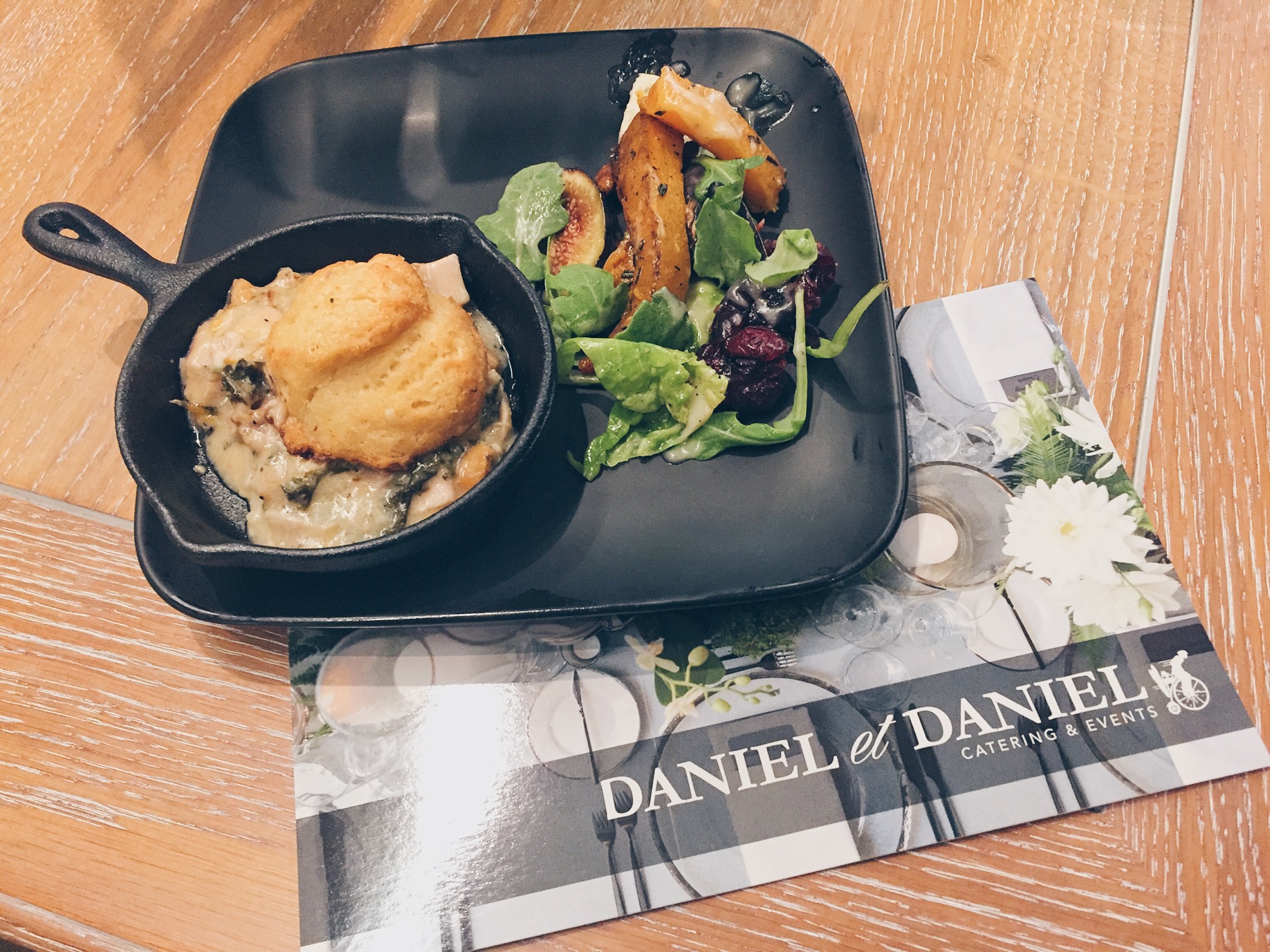 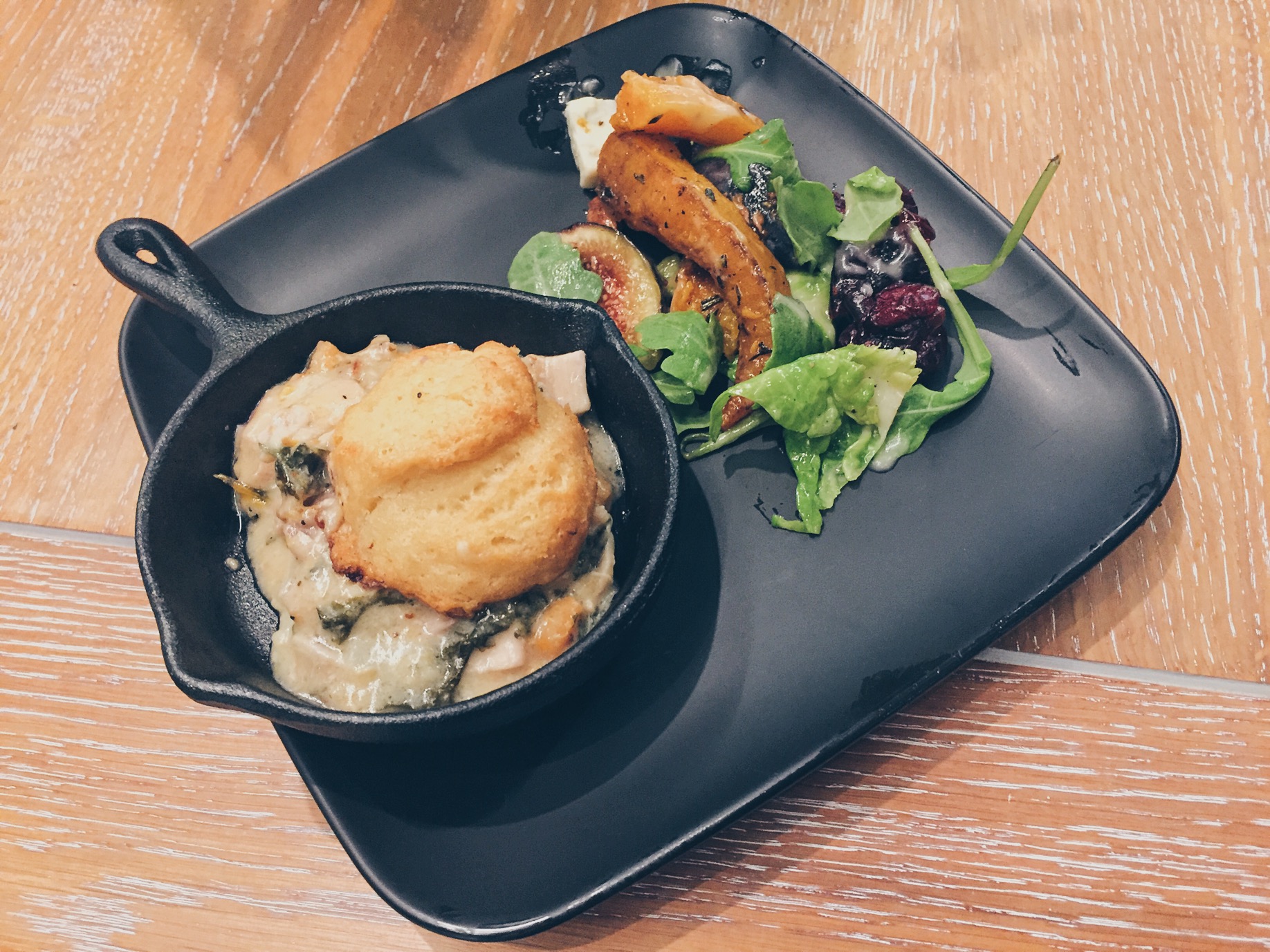 The Wild Mushroom Risotto Cakes was decent. I enjoyed it but wish there was a heavier taste of mushrooms in it, as I could only taste mostly the risotto. The Artisan House Smoked Chicken Sausage had a very unique combination of tastes since it was crispy from the Fuji apple, chewy from the chicken sausage but the dijon mustard sauce did not fit well with this pairing, in my opinion. I feel like they couldhv used another type of sauce. J tried the Garam Masala Jumbo Shrimp and said it was pretty good.

Hors D’oeuvres presentation are always so cute and appealing. 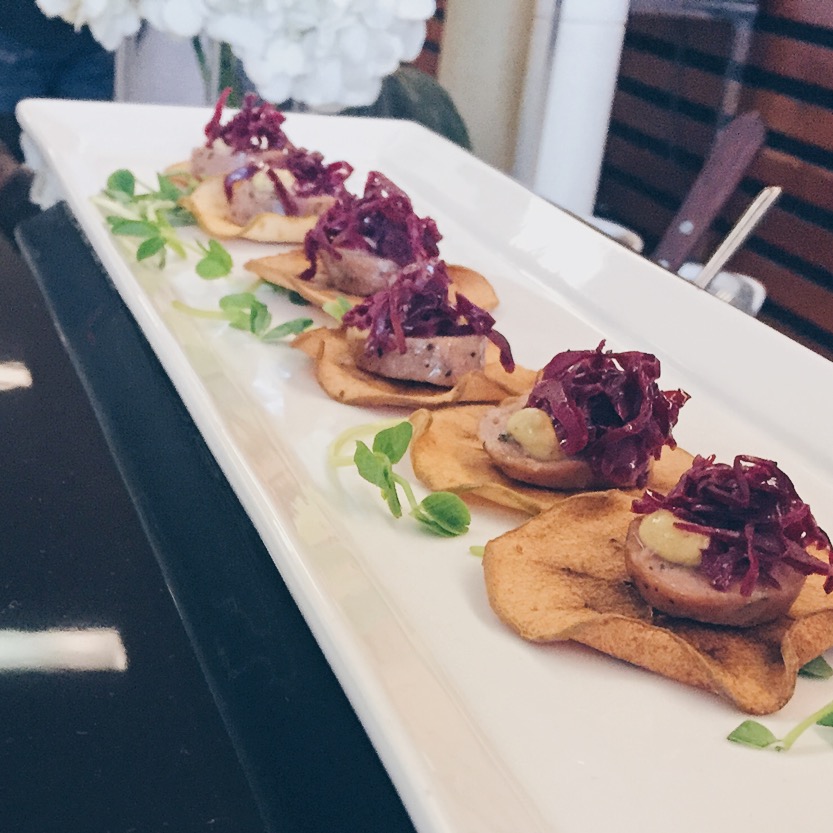 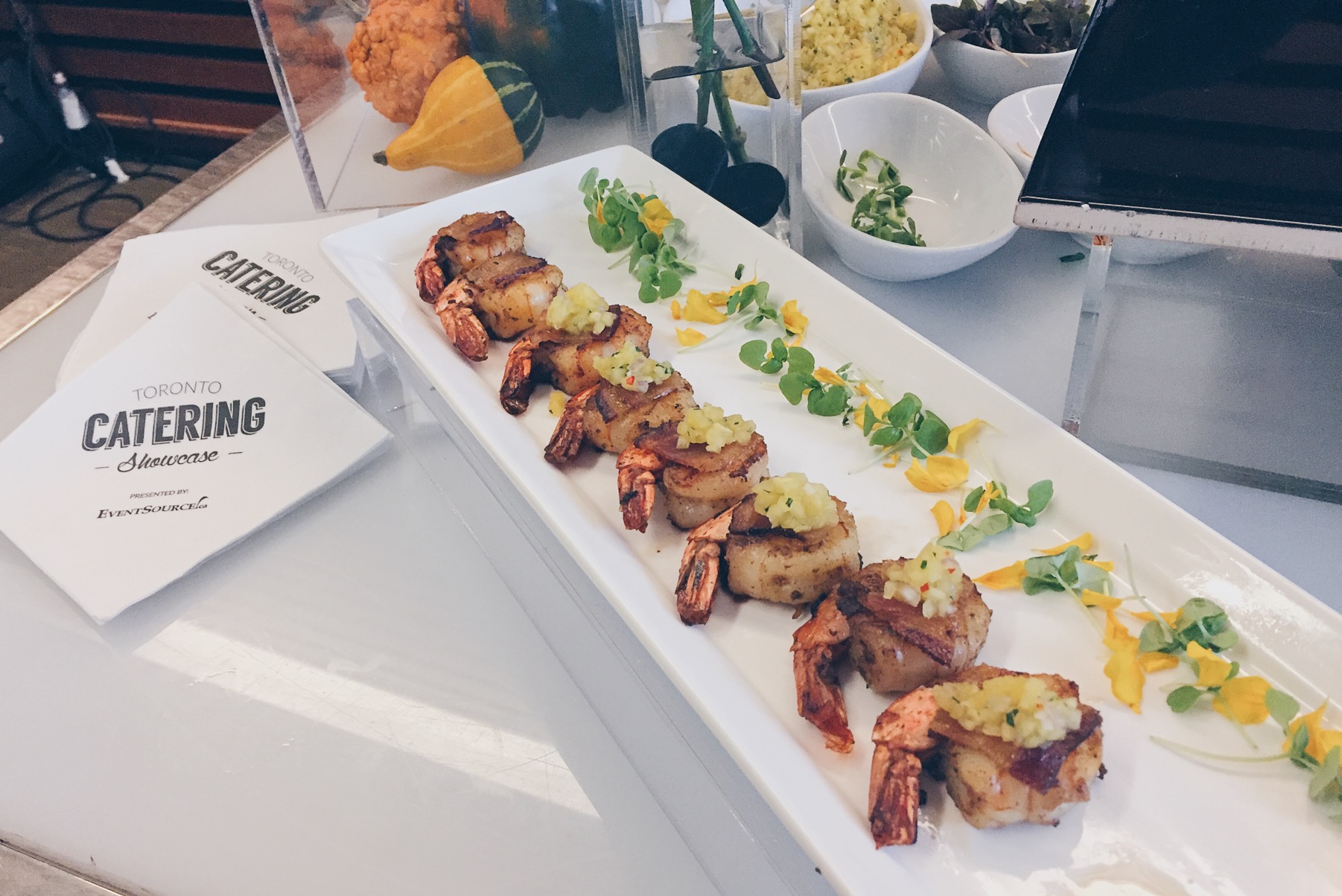 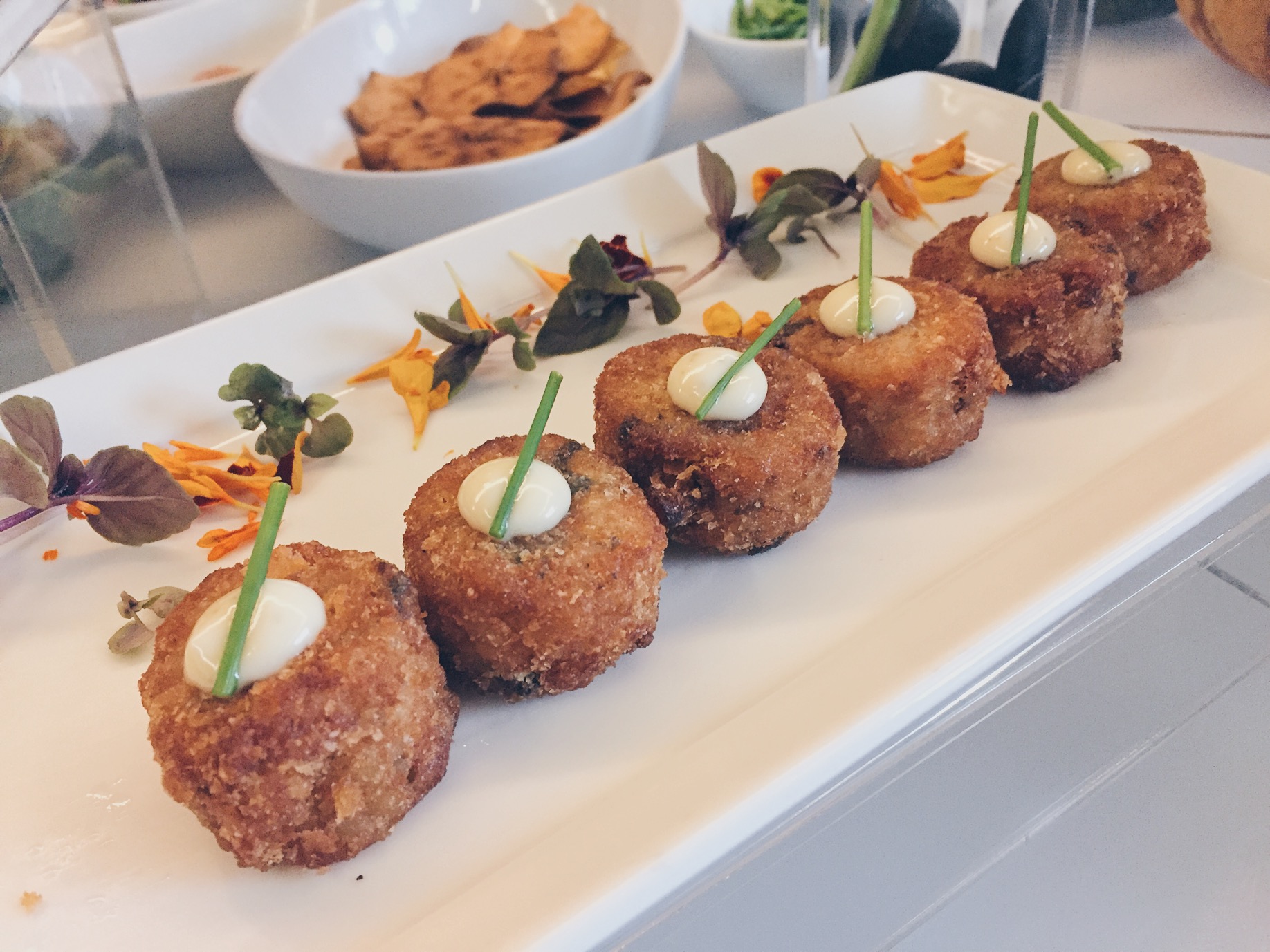 Oysters XO was also there but instead of a booth, they had servers walking around, shucking and serving fresh oysters to us! He had a couple of sauces, but I can only remember lemon juice and tabasco since J got lemon juice whereas I got tabasco sauce. The meat of the oysters, unfortunately, was pretty small but perhaps they were saving the bigger oysters for bigger events and they were serving the smaller sampled sizes ones here.

It was cool to see the oysters shucked infront of us but it does take a bit of time to do so. 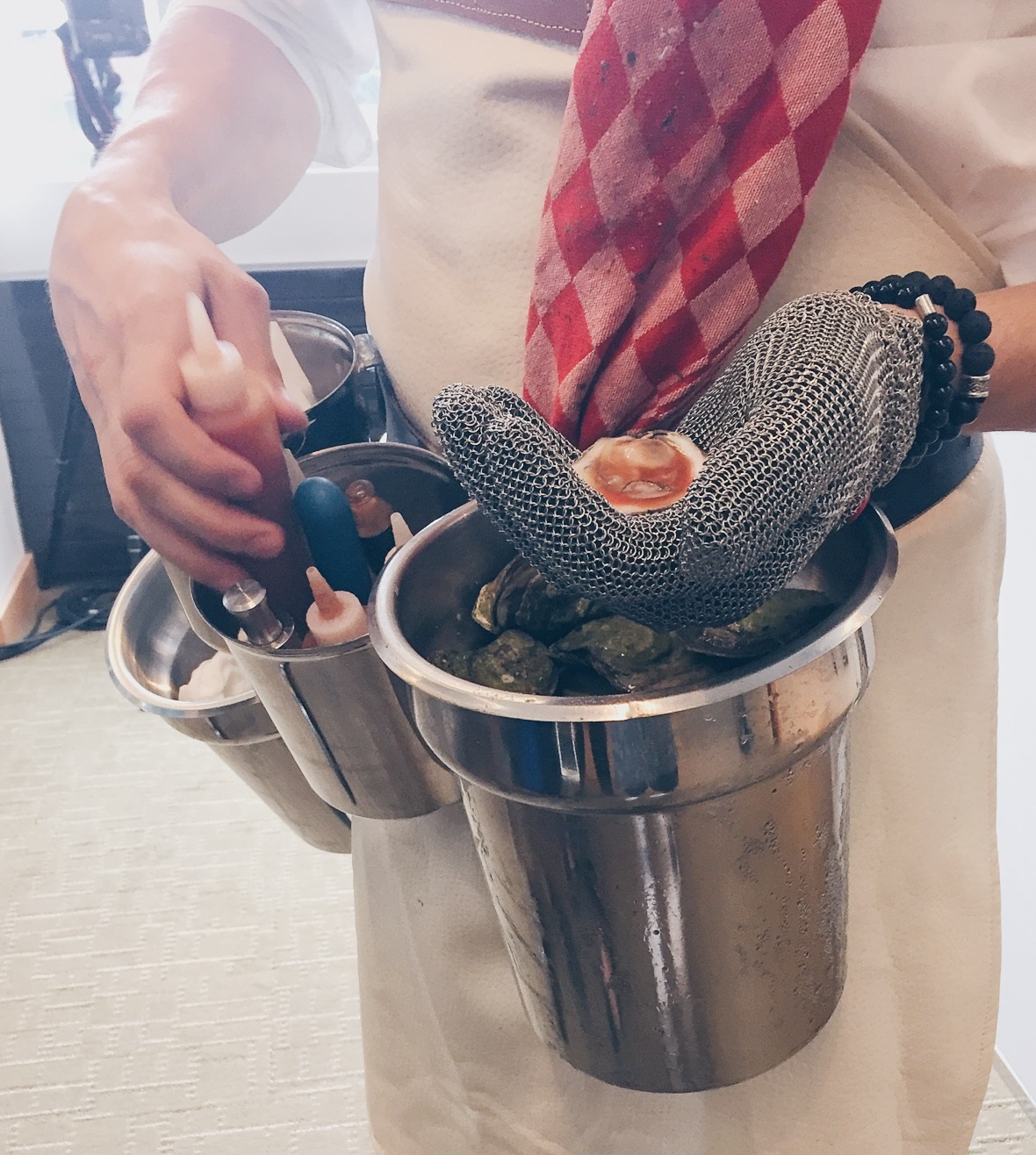 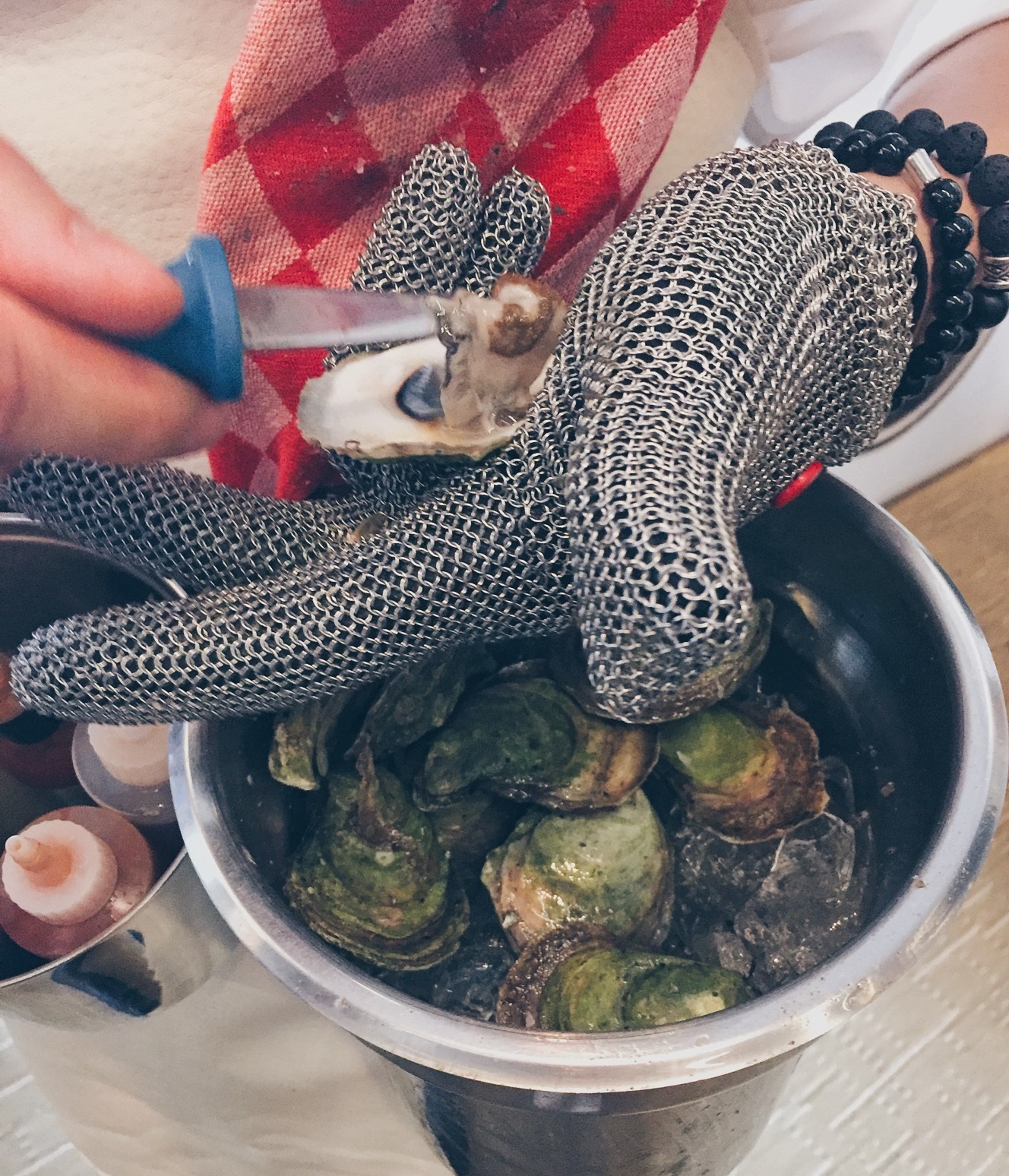 I don’t remember which caterer this was from, but it was a miniature form of a pumpkin pie… The crust did break quick and I almost dropped it before it entered my mouth… Whoops. 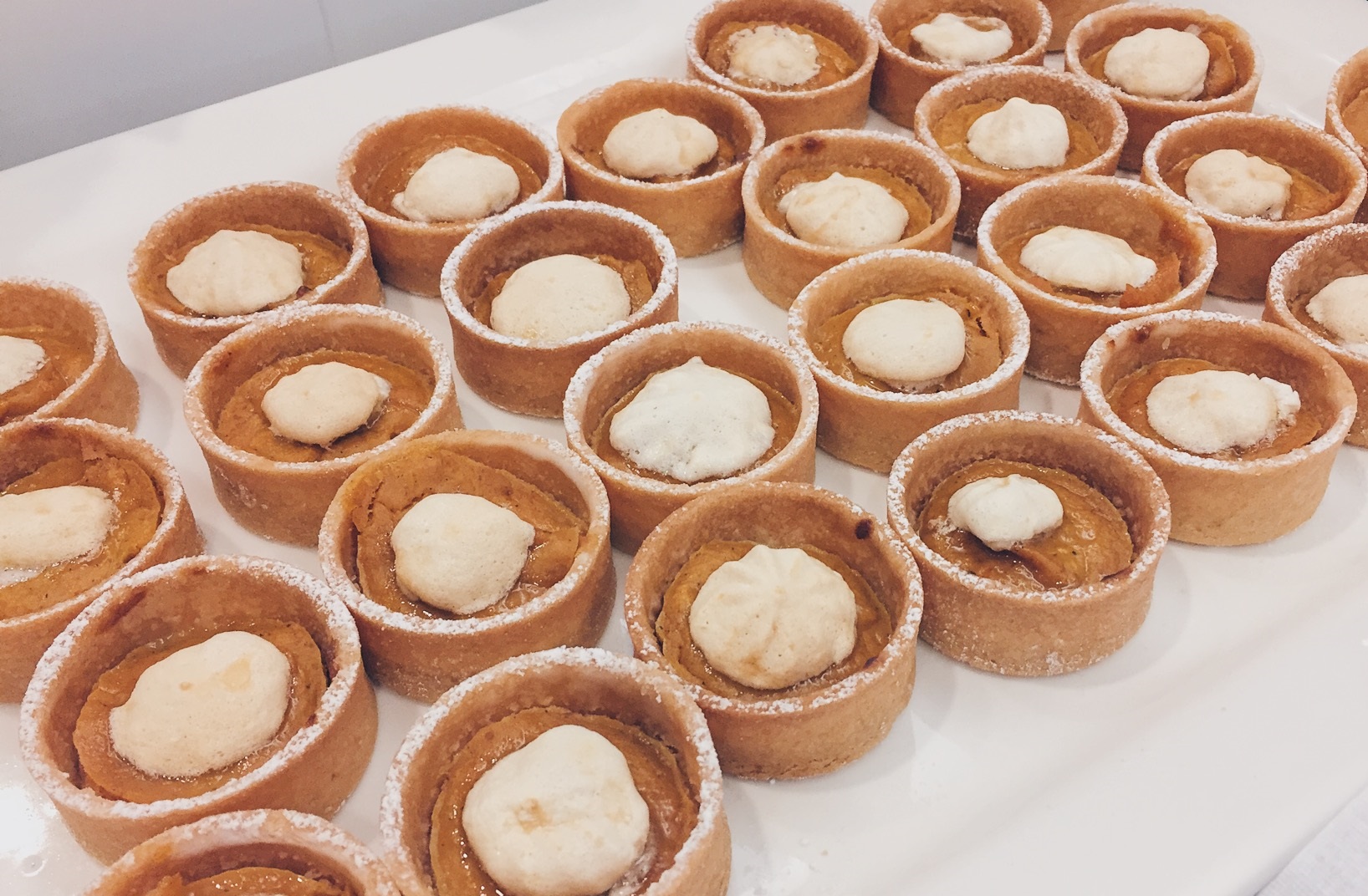 Parts & Labour or P&L Catering had bite sized Chicken and Waffles, but I only had their version of S’Mores! J found it too sweet for her liking but I personally really like it! But I definitely won’t be able to eat that much of it due to it’s sweetness. 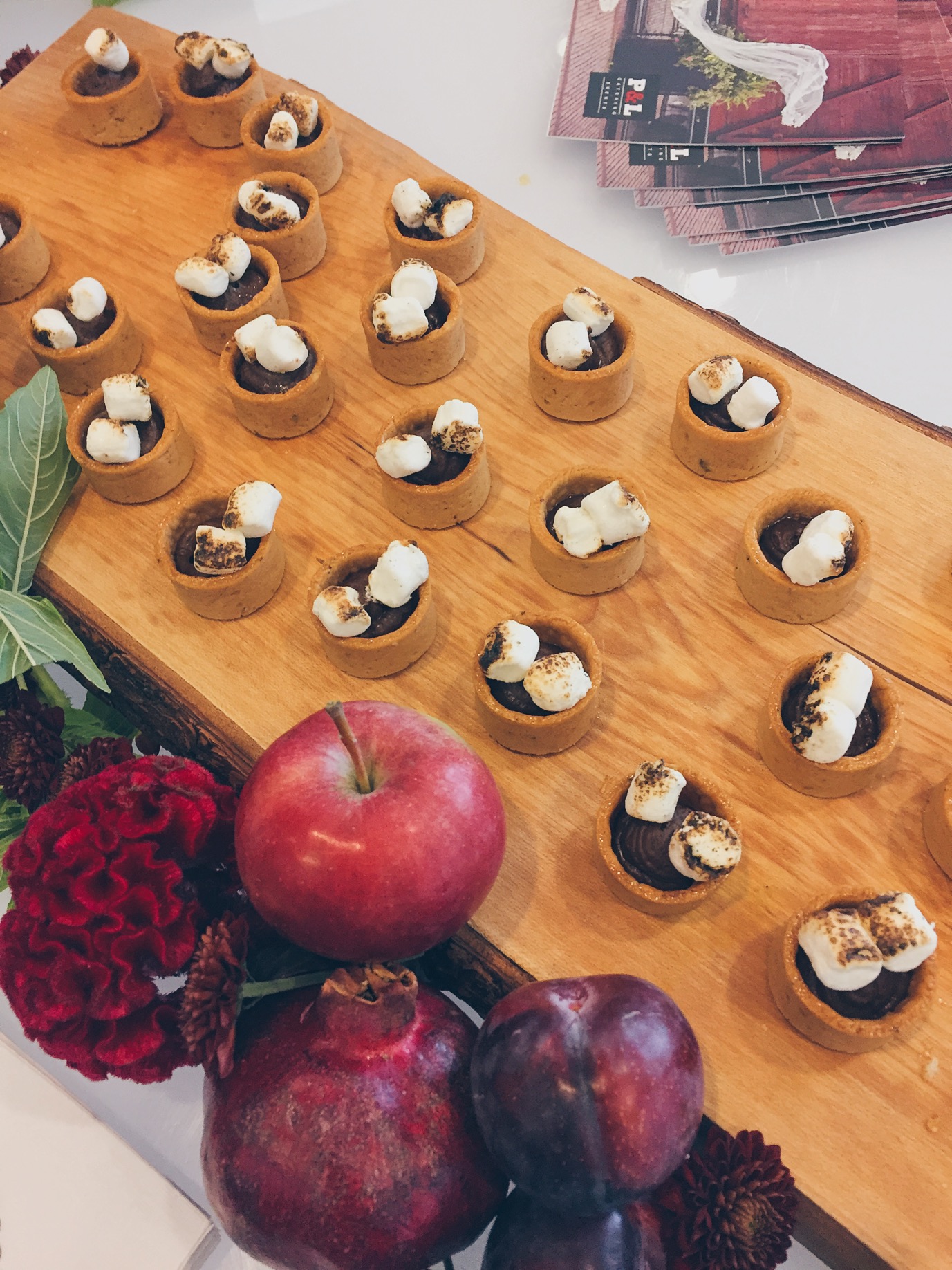 Kiss The Cook Catering had an intriguing dishes like the Miso Carbonara LaMian and the Chinese Pesto LaMian with Lemon Ricotta. When you put Miso and Carbonara together, I’m in!

LaMian are Chinese hand-pulled noodles where they had brought in a noodle master in to pull the LaMian in person! It was crazy and definitely an eye-catcher.

So I had the Miso Carbonara LaMian which had grated cheese, green onions, some sort of meat and an miniature egg to top it off! It was a great dish because I love both Miso and Carbonara. Plus the LaMian was chewy and fresh, but I would have definitely liked it if the pieces were slightly thinner but it doesn’t matter. It still tasted great! 🙂 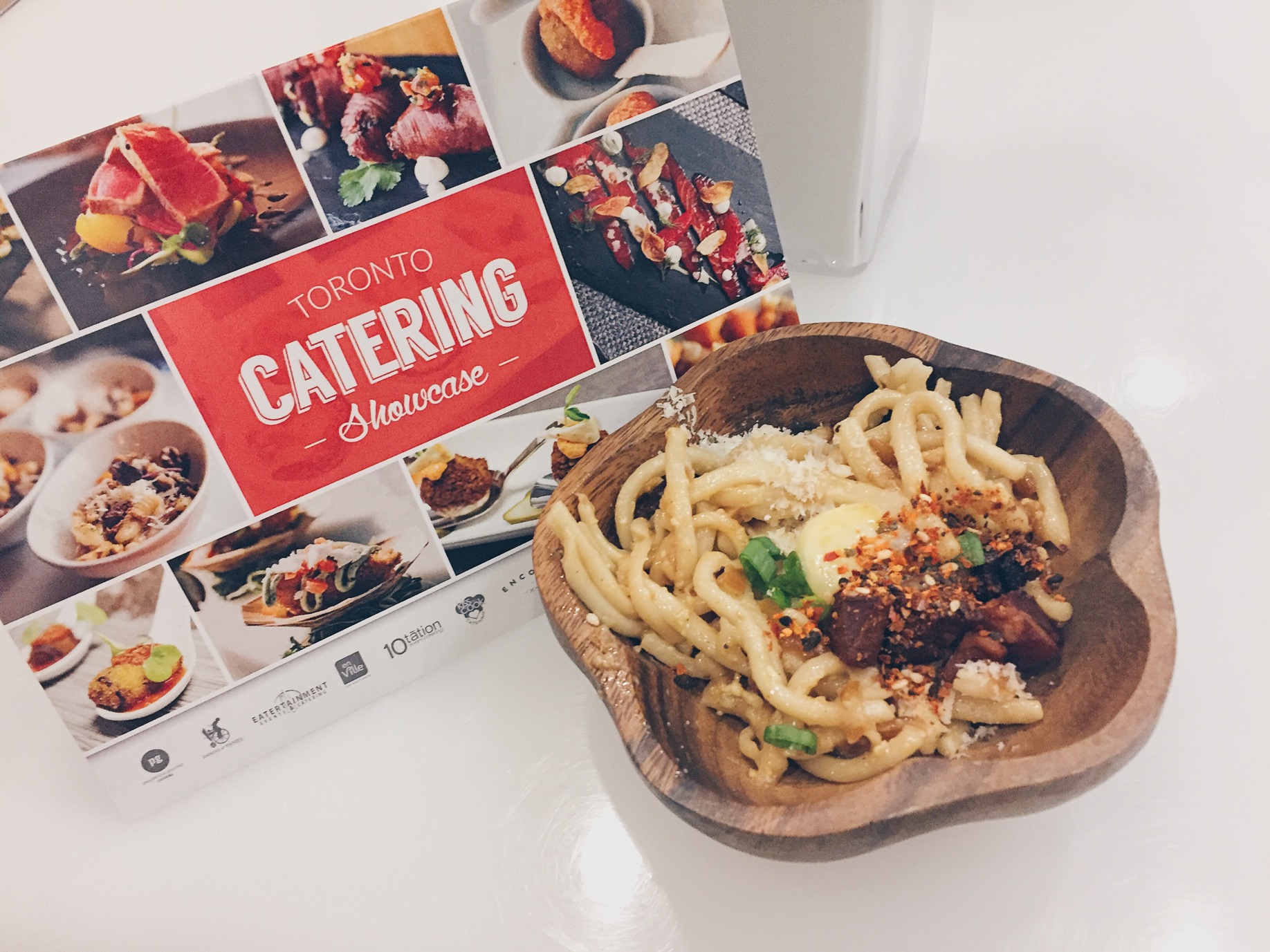 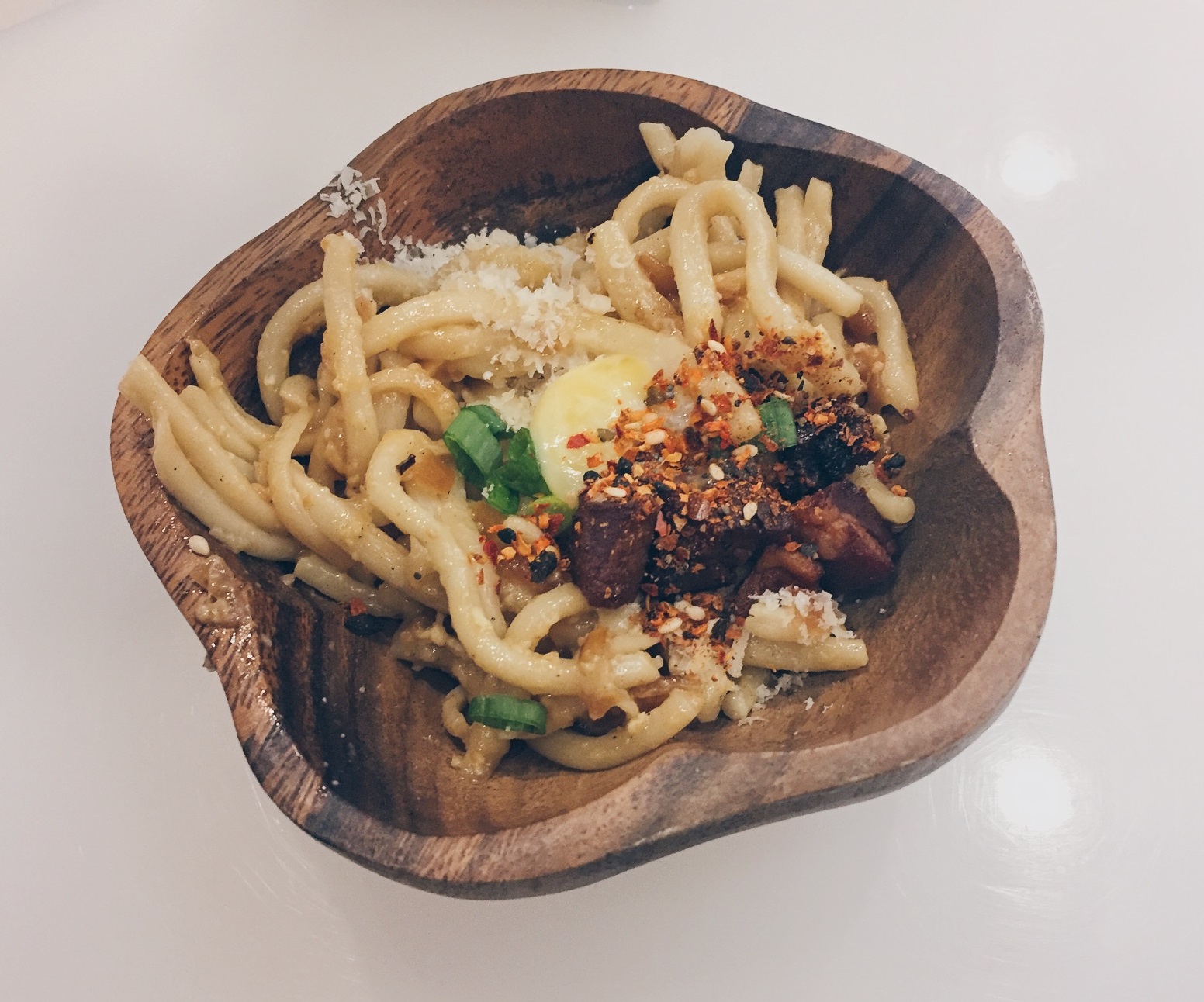 Zooming in the Miso Carbonara Lamian!

Special thanks to Sandi (aka @foodaholicsblog_) for hosting the giveaway! 🙂 . She’s also a huge Toronto food blogger, so do check her out.

Overall the event was super fun and I enjoyed myself very much! The musicians playing were very lively and played current songs which was all very lovely – I was humming to myself several times. & I was super full at the end of the event… was definitely worth going in with an empty stomach.

I definitely hope to go and blog more food events like this in the future 🙂 !